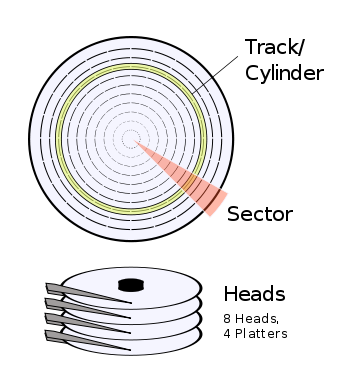 Cylinder-head-sector, also known as CHS, was an early method for giving addresses to each physical block of data on a hard disk drive. In the case of floppy drives, for which the same exact diskette medium can be truly low-level formatted to different capacities, this is still true.

Though CHS values no longer have a direct physical relationship to the data stored on disks, virtual CHS values (which can be translated by disk electronics or software) are still being used by many utility programs.

CHS addressing is the process of identifying individual sectors on a disk by their position in a track, where the track is determined by the head and cylinder numbers. The terms are explained bottom up, for disk addressing the sector is the smallest unit. Disk controllers can introduce address translations to map logical to physical positions, e.g., zone bit recording stores fewer sectors in shorter (inner) tracks, physical disk formats are not necessarily cylindrical, and sector numbers in a track can be skewed.

A sector is the smallest storage unit that is addressable by a hard drive, and all information stored by the hard drive is recorded in sectors. Common sector sizes are 512 bytes for hard disks and 2048 bytes for CDs and DVDs, but other sizes such as 128 and 1024 were also used.[1][2] Vendors of hard drives and software developers have created Advanced Format, a standard for data stored in physical sectors of 4096 bytes,[3] while still permitting access on logical sectors of 512 bytes in a scheme known as 512e.[4]

In CHS addressing the sector numbers always start at 1, there is no sector 0. For physical disk geometries the maximal sector number is determined by the low level format of the disk. However, for disk access with the BIOS, the sector number was encoded in six bits, resulting in a maximal number of 63=64-1 sectors per track, where 64=2**6 corresponds to six bits. The maximum 63 is still in use for virtual CHS geometries.

A device called a head reads and writes data in hard drive by manipulating the magnetic medium that composes the surface of an associated disk platter. Naturally, a platter has 2 sides and thus 2 surfaces on which data can be manipulated; usually there are 2 heads per platter, one on each side. (Sometimes the term side is substituted for head, since platters might be separated from their head assemblies, as with the removable media of a floppy drive.)

The CHS addressing supported in old BIOS code used eight bits for up to 256 heads counted as head 0 up to 255 (hex. FFh). However, some long-forgotten[citation needed] software supported only 255 heads, causing no problems for physical disks at this time with fewer heads. In essence erroneous 255 is still in use for virtual 255×63 geometries. This historical oddity can affect the maximum disk size in old BIOS INT 13h code as well as old PC DOS or similar operating systems:

The tracks are the thin concentric circular strips of sectors. At least one head is required to read a single track. With respect to disk geometries the terms track and cylinder are closely related. For a single or double sided floppy disk track is the common term; and for more than two heads cylinder is the common term. Strictly speaking a track is a given CH combination consisting of SPT sectors, while a cylinder consists of SPT×H sectors.

A cylinder comprises the same track number on each platter, spanning all such tracks across each platter surface that is able to store data (without regard to whether or not the track is "bad"). Thus, it is a three-dimensional structure. Any track comprising part of a specific cylinder can be written to and read from while the actuator assembly remains stationary, and one way in which hard drive manufacturers have increased drive access speed has been by increasing the number of platters which can be read at the same time.

The Unix communities employ the term block to refer to a sector or group of sectors. For example, the Linux fdisk utility normally displays partition table information using 1024-byte blocks, but also uses the word sector to help describe a disk's size in the phrase, 63 sectors per track.

Clusters are allocation units for data on various file systems (FAT, NTFS, etc.), where data mainly consists of files. Clusters are not directly affected by the physical or virtual geometry of the disk, i.e., a cluster can begin at a sector near the end of a given CH track, and end in a sector on the physically or logically next CH track.

Earlier hard drives used in the PC, such as MFM and RLL drives, divided each cylinder into an equal number of sectors, so the CHS values matched the physical properties of the drive. A drive with a CHS tuple of 500 4 32 would have 500 tracks per side on each platter, two platters (4 heads), and 32 sectors per track, with a total of 32 768 000 bytes (31.25 MB).

ATA/IDE drives were much more efficient at storing data and have replaced the now archaic MFM and RLL drives. They use zone bit recording (ZBR), where the number of sectors dividing each track varies with the location of groups of tracks on the surface of the platter. Tracks nearer to the edge of the platter contain more blocks of data than tracks close to the spindle, because there is more physical space within a given track near the edge of the platter. Thus, the CHS addressing scheme cannot correspond directly with the physical geometry of such drives, due to the varying number of sectors per track for different regions on a platter. Because of this, many drives still have a surplus of sectors (less than 1 cylinder in size) at the end of the drive, since the total number of sectors rarely, if ever, ends on a cylinder boundary.

An ATA/IDE drive can be set in the system BIOS with any configuration of cylinders, heads and sectors that do not exceed the capacity of the drive (or the BIOS), since the drive will convert any given CHS value into an actual address for its specific hardware configuration. This however can cause compatibility problems.

For operating systems such as Microsoft DOS or older version of Windows, each partition must start and end at a cylinder boundary. Only some of the most modern operating systems (Windows XP included) may disregard this rule, but doing so can still cause some compatibility issues, especially if the user wants to perform dual booting on the same drive. Microsoft does not follow this rule with internal disk partition tools since Windows Vista. [12]