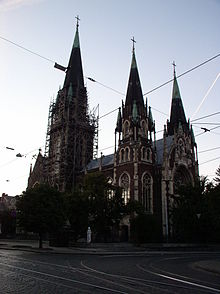 The facade and belltower 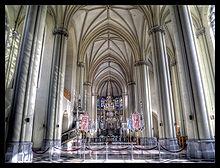 The church was built by the Latin Archbishop of Lviv Saint Joseph Bilczewski in the years 1903-1911 as a parish church for the city's dynamically developing western suburb. It was designed by Polish architect Teodor Talowski,[1] in the neo-Gothic style, similar to that of the Votive Church in Vienna. St. Elisabeth's, placed on a hill which is the watershed of the Baltic and Black Sea, with its facade flanked by two tall towers and an 85 m belfry on the north side with imposing spires was envisioned as Lviv's first landmark to greet visitors arriving in the city by train.

In 1939 the church was damaged in a bombing raid but remained open until 1946. After the war, the building was used as warehouse[2] and fell further into ruin, until it was returned to faithful with the collapse of the Soviet Union. In 1991 a Ukrainian Greek Catholic was established and the church was reconsecrated as the Greek Catholic church of Sts. Olha and Elizabeth.