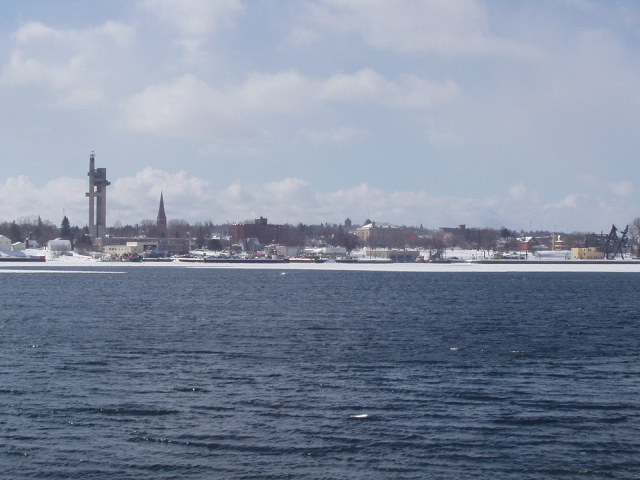 imagesize =
image_caption = View of Sault Ste. Marie, Michigan from the Canadian side of the river.

Sault Ste. Marie (pronEng|ˌsuːseɪntməˈriː) is the oldest city in both the state of and in the entire region of the . The city is the of Chippewa County. It is at the eastern edge of Michigan's , on the Canadian border, separated from its twin -albeit larger- city of Sault Ste. Marie, - the oldest city in the of - by the St. Marys River. As of the 2000 census, the city's population was 16,542, declining to a population of 14,005 according to the 2007 census estimate. It is the of Chippewa CountyGR|6.

The two Saults were formally founded in 1668 by Father as one city, then split into two in 1797 (when the was transferred from the province of to the United States).

"Sault Sainte Marie" is Old French meaning "Rapids of St. Mary's", a reference to the rapids in the Saint Marys River, which joins to . (The spelling Sault-Sainte-Marie is more usual in French, but the name is written without hyphens in English). Either city, or the vicinity as a whole, can also be informally called The Sault or The Soo. More recently, there have been a few references to a Greater Sault Ste. Marie, encompassing both cities and their outlying satellite communities, although as of 2006 this term is not in widespread use.

The two cities are joined by the International Bridge, which connects Interstate Highway 75 in Sault Ste. Marie, Michigan and Huron Street in Sault Ste. Marie, Ontario. Shipping traffic in the system bypasses the Saint Mary's Rapids via the American , the world's busiest canal in terms of tonnage that passes through it, while smaller recreational and tour boats use the Canadian . The downtown of the city sits on an island with the locks to the north, and the Saulte Ste. Marie Power Canal to the south.

The city is the site of the , which lets ships travel between and the lower . Although the locks are not as busy as in past years, a considerable amount of domestic and foreign commerce passes through them. People come from around the world to view close up the ships passing through the locks. The largest ships are convert|1000|ft|m long by convert|105|ft|m wide. These are domestic carriers (called "lakers") that are too large to transit the around and thus are land-locked. Foreign ships (termed "salties") are smaller.

(Chippewa) Native Americans had lived in the area, which they referred to as "Baawitigong", for centuries, since it provided an excellent place to catch fish. In 1668, French missionaries and founded a mission, making the Sault the third oldest city west of the in what is now the United States. The falls proved a choke point for shipping. Early Lake Superior ships were hauled around the rapids, much like moving a house, a process which could take weeks. Later cargoes were unloaded and hauled around the rapids and loaded onto other waiting boats. The first American lock, the State Lock, was built in 1855.

The city draws its name from the nearby rapids, originally named "Les Saults de Sainte-Marie". "Sault" is an archaic French word for "waterfall" or "rapids".

The city is the northern terminus of , which connects with the at St. Ignace convert|52|mi|km to the south, and continues south to Miami, . M-129 also has its northern terminus in the city. M-129 was at one time a part of the system which was intended to connect the northern industrial states with the southern agricultural states. Until 1984 the city was the eastern terminus of the western segment of US 2. County Highway H-63 also has its northern terminus in the city and extends south to St. Ignace and follows a route very similar to Interstate 75. The city is served by the in Kinross about convert|20|mi|km south and the Soo Municipal Airport.

Sault Ste. Marie is the namesake of the , now the , the U.S. arm of the . This railroad has a bridge parallel to the International Bridge, crossing the St. Marys River.

The Sugar Island Ferry provides automobile and passenger access between Sault Ste. Marie and Sugar Island. The short route that the ferry travels crosses the shipping channel. The Soo Locks allow lake freighters and ocean vessels to travel between Lakes Huron and Superior, which have convert|21|ft|m in elevational difference, with Lake Superior being the higher of the two. Freighters typically do not dock in the Sault, however there is a mail boat, tugs, a tourist passenger ferry service, and Coast Guard station located along the shoreline on the lower side of the Soo Locks.

Sault Ste. Marie is among the snowiest places in Michigan, receiving an average of 128 es of snow a year with a record year where convert|209|in|mm fell. Sixty-two inches of snow fell in one five-day snowstorm, including convert|28|in|mm in 24 hours, in December 1995. Sault Ste. Marie receives an average annual convert|34|in|mm of precipitation measured as equivalent rainfall. Its immediate region is also the cloudiest in the UP, having over 200 cloudy days a year.

There were 5,742 households out of which 28.8% had children under the age of 18 living with them, 39.9% were married couples living together, 13.2% had a female householder with no husband present, and 42.5% were non-families. 33.8% of all households were made up of individuals and 13.3% had someone living alone who was 65 years of age or older. The average household size was 2.28 and the average family size was 2.92.

is a major industry in what is usually referred to as the "Soo". The locks and nearby Kewadin Casino, owned by the Sault Tribe of Chippewa Indians, are the major draws, as well as the forests, inland lakes and Lake Superior shoreline. The Soo is also a gateway to Lake Superior's scenic north shore through its twin city Sault Ste. Marie, . The two cities are connected by the large , a steel with suspended deck passing over the St. Marys River.

Sault Ste. Marie is home to , founded in 1946 as an extension campus of Michigan Mining and Technological College (now ). Several famous athletes have come from Sault Ste. Marie including former NHLer . Sault Ste. Marie was also the home of , the early American Indian writer, and her husband , the Indian agent and ethnographer. Their houses still stand and are listed on the .

All stations listed here are rebroadcasters of television stations based in Traverse City and Cadillac.

is served by WTOM channel 4 from Cheboygan, which repeats WPBN.

The area has no local service over-the-air; on Charter's cable system, from Marquette offers PBS programming.

None of these stations are seen on cable in the Canadian Soo, as Shaw cable opted for Detroit and Rochester channels, instead.