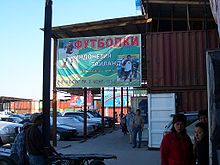 In the clothing section

Dordoy Bazaar (Kyrgyz: Дордой Базары, Russian: Рынок Дордой; also spelled Dordoi Bazaar in English) is a large wholesale and retail market in Bishkek, Kyrgyzstan. It is one of Asia's greatest public market places, comparable to Bangkok's Chatuchak weekend market or Tehran's Grand Bazaar. It's been described by a Western journalist as "a modern monument to the power of raw commerce".[1]

Dordoy Bazaar is not just a major shopping and employment center for the Bishkek metropolitan area and entire Chuy River Valley region, but also one of the main entrepots through which consumer goods from China arrive to shops and markets in Kazakhstan, Russia, and Uzbekistan.[2] According to some economists, this re-export (the other center for which, targeting Uzbekistan, is the Karasuu Bazar at Kara-Suu, Osh Province) is one of two largest economic activities of Kyrgyzstan.[3] 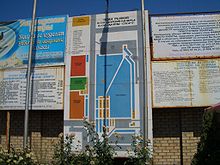 Announcement boards help merchants and shoppers find their way, and inform them of their legal rights

The Dordoy market stretches for more than a kilometer on the north-eastern outskirts of Bishkek, just within the bypass highway that skirts the city in the north. Legally, it is an agglomeration of several independent markets adjacent to each other, but as there are no fences, the borders between components are not particularly noticeable. According to a 2007 city atlas[4], the component markets are:

Most of the market is built of double-stacked shipping containers. Typically, the lower container is used as a shop, while the upper one is used for additional storage. According to a 2005 newspaper report, there were some 6,000 to 7,000 containers in the bazaar; around 20,000 people worked there (as vendors, security, service personnel).[5]

The containers, organized in dozens of rows, form streets and plazas of a sort. Smaller buildings between the blocks of containers house restaurants, administrative offices, toilets, hotels, and other ancillary structures. 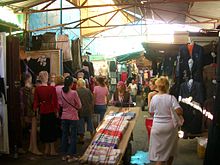 A busy day in the apparel section

The market is said to date its origin to 1992, its 15th anniversary being celebrated in 2007.[2] In the view of journalists from the neighbouring Uzbekistan, one of the causes for the rise of Bishkek's Dordoy Bazaar was the decline of Uzbekistan's major wholesale markets. After the Uzbek government transferred Tashkent's huge Hippodrome Market under the jurisdiction of their country Ministry of the Interior in 1998, increase police harassment of the traded resulted in Hippodrome's losing its dominant position in the region; after the reconstruction that it underwent in 2002-2003, Hippodrome, which used to have 8,600 trading outlets and 18,000 traders, was succeeded by much smaller Chilanzar goods market with merely 2,540 outlets. A similar story took place in Jizzakh, where in 2006 the authorities closed down the Dunyo Bozori (Uzbek for "World Market") marketplace, which had been set up by Chinese traders, in order to replace it by Abu Sahiy Nur shopping centre built by Lola Karimova. As Uzbekistan's markets declines, purchasing activities to Uzbek buyers have shifted to Kyrgyzstan's Bishkek or Kara-Suu.[2] 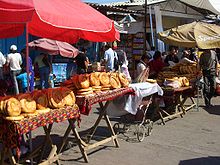 Different sections of the markets specialize in various types of consumer goods, including clothing, shoes, furniture, electric and electronic equipment, toys, automotive supplies, construction materials, etc. While some kinds of groceries (e.g. factory-packaged canned goods or sweets) are sold at Dordoy, it is not a produce market; occasional produce vendors are present there merely to feed the vendors and customers.

Most of the goods sold at Dordoy arrive from China,[1] with the second largest source (perhaps 30% of all imports) being Turkey.[10][2] One can also find clothing from Thailand and Europe, music CDs from Russia, and goods from many other countries in Eurasia, as well as a selection of local products.

Although many of the people working and shopping at the Bazaar speak Kyrgyz, Russian is the main language used in trade. 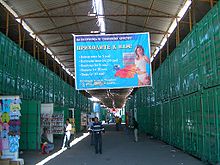 A typical clothing aisle, with only a few containers open at the moment

There is no rail access to the market, so all the goods come and leave the bazaar by truck or car.

Two large plazas near the northern and southern ends of the market are connected by frequent minibus service with central Bishkek. From the northern plaza, minibuses also run to various points throughout Chuy Province, including Sokuluk, Kant, Tokmok, and Korday border crossing (on the Kazakhstan border). For the convenience of the "shuttle traders", charter buses run from Dordoy to several major cities in Kazakhstan and in Russia's Urals and Western Siberia.