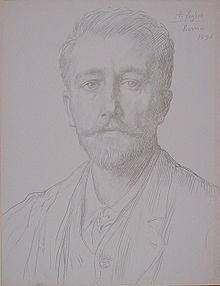 Charles Holroyd was born in Leeds. He received his art education under Professor Legros at the Slade School, University College, London, where he had a distinguished career.

After passing six months at Newlyn, where he painted his first picture exhibited in the Royal Academy, Fishermen Mending a Sail (1885), he obtained a travelling scholarship and studied for two years in Italy, a sojourn which greatly influenced his art.

At his return, on the invitation of Legros, he became for two years assistant-master at the Slade School, and there devoted himself to painting and etching.

For the church of Aveley, Essex, he painted a triptych altar-piece, The Adoration of the Shepherds, with wings representing St Michael and St Gabriel, and designed as well the window, The Resurrection. His portraits, such as that of GF Watts, RA, in the Legros manner, show much dignity and distinction.

Holroyd made his chief reputation as an etcher of exceptional ability, combining strength with delicacy, and a profound technical knowledge of the art. Among the best known are the Monte Oliveto series, the Icarus series, the Monte Subasio series, and the Eve series, together with the plates, The Flight into Egypt, The Prodigal Son, A Barn on Tadworth Common (etched in the open air), and The Storm. His etched heads of Professor Legros, Lord Courtney and Night, are admirable alike in knowledge and in likeness. His principal dry-point is The Bather.

In all his work Holroyd displays an impressive sincerity, with a fine sense of composition, and of style, allied to independent and modern feeling. He was appointed the first keeper of the National Gallery of British Art (Tate Gallery) in 1897,[1][2] and on the retirement of Sir Edward Poynter in 1906 he received the directorship of the National Gallery. He was knighted in 1903.[3] His Michael Angelo Buonarotti (London, Duckworth, 1903) is a scholarly work of real value. He died on 19 November 1917.[4]