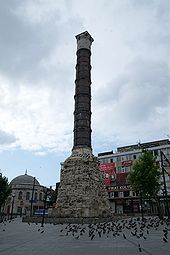 The Column of Constantine in July 2010, north side

The Column of Constantine (or Burnt Column) (Turkish: Çemberlitaş sütunu, from çemberli 'hooped' and taş 'stone') is a Roman monumental column constructed on the orders of the Roman emperor Constantine the Great in 330 AD. It commemorates the declaration of Byzantium (renamed by Constantine as Nova Roma) as the new capital city of the Roman Empire. The column is located on Yeniçeriler Caddesi in central Istanbul, along the old Divan Yolu (the 'Road to the Imperial Council') between Sultanahmet and Beyazıt Square (known as Forum Tauri in the Roman period.)

The Column of Constantine in 1912

The column was dedicated on May 11, 330 AD, with a mix of Christian and pagan ceremonies.

In Constantine's day the column was at the center of the Forum of Constantine (today known as Çemberlitaş Square), an oval forum situated outside the city walls in the vicinity of what may have been the west gate of Antoninia. On its erection, the column was 50 meters tall, constructed of nine cylindrical porphyry blocks surmounted by a statue of Constantine in the figure of Apollo. The orb he carried was said to contain a fragment of the True Cross. At the foot of the column was a sanctuary which contained relics claimed to be from the crosses of the two thieves who were crucified with Jesus Christ at Calvary, the baskets from the loaves and fishes miracle, an alabaster ointment jar belonging to Mary Magdalene and presumably used by her for the washing of the feet of Jesus,[1] the palladium of ancient Rome and a wooden statue of Athena from Troy.

A strong gale in 1106 AD caused the statue and three of the upper cylinders of the column to fall. Some years later, Byzantine emperor Manuel I Komnenos (reigned 1143-1180) placed a cross on top, in the place of the original statue, and added a commemorative inscription that read "Faithful Manuel invigorated this holy work of art which has been damaged by time." Bronze wreaths once covered the joints between the drums, but these were taken by the Latin Crusaders who looted the city during the Fourth Crusade in 1204. The cross was removed by the Ottoman Turks after the fall of Constantinople in 1453.[2]

Earthquakes and a fire in 1779 destroyed the neighborhood surrounding the column, leaving it with black scorch marks and earning it the name 'Burnt Column'. The column was restored by Abdülhamid I, who had the present masonry base added.[3]. The base was strengthened in 1779. The original platform of the column is 2.5 meters below ground.

The Column of Constantine is one of the most important examples of Roman art in Istanbul. The column is 35 meters tall today. Restoration work has been going on since 1955. Cracks in the porphyry were filled and the metal brackets renewed in 1972. Since 1985, the monuments of the historic peninsula of Istanbul, including the column, have been listed as a World Heritage Site.

Media related to Column of Constantine I at Wikimedia Commons