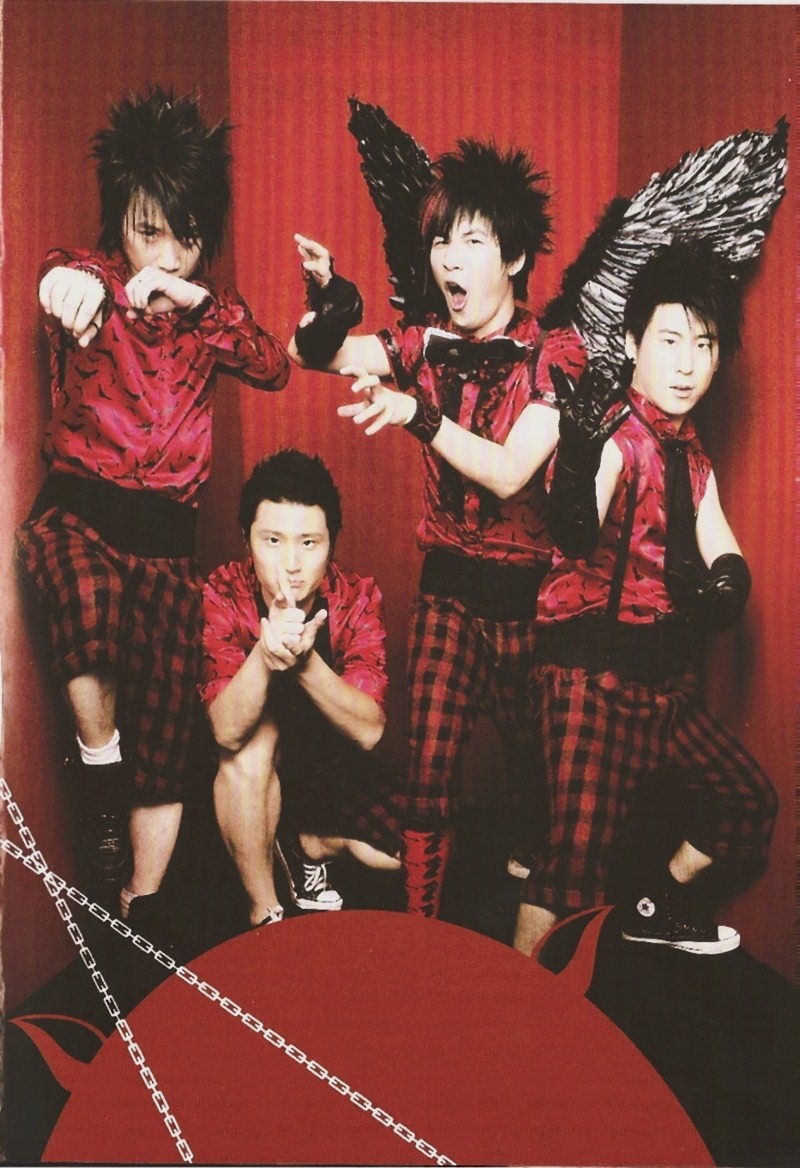 Dubbed as "China's first famous adolescent band," the Flowers had barely blossomed into youth when they first appeared on the Chinese music scene in 1998. Originally, the lineup consisted of Da Zhang Wei (lead vocals, guitar), bassist Guo Yang and drummer Wang Wenbo, but would later change when Shi Xingyu eventually joined the group in 2001. The three members, Da Zhang Wei, Wang Wenbo and Guo Yang, met while still in high school and were all in their teens. During their early career, the Flowers were a trio band playing in the style of music reminiscent of fellow American punk bands such as and who were the group's influences. As they performed in local bars and clubs, other punk bands were beginning to break out in Beijing's underground music scene. The Flowers, unable as they were to hide their hunger for commercial success, were somewhat aloof from this scene, and often derided in some quarters for their attitudes. The trio first signed on to a small Beijing-based Chinese indie label, in 1998. A year later, the band would release their debut album "On the Other Side of Happiness" which turned out to be a surprise hit. No matter, as the accessible nature of songs like "Stillness", "Disillusion" and "School's Out" made the band perfect for the music market they wished to conquer. The Flowers were somewhat credited for helping to give disaffected Chinese youths a resonant voice, as many teenagers were deeply affected by their songs and felt that the Flowers' lyrics reflected their own life experiences. As a result, punk music in general became more widely known in China.

In light of the band's commercial impact, some over enthusiastic commentators even declared that The Flowers were the true bringers of punk to the Chinese. They pointed out that fans had previously found even the acoustic grunge of Nirvana's "" difficult to comprehend.

Although the band's music wasn't very hard-edged, the Flowers were at least punk enough to get involved in a two-year long lawsuit with their first company, New Bees Music. The dispute almost brought the band to a premature end, but was eventually settled out of court. The Flowers marked the end of their purgatory by signing to and bringing in a fourth member, guitarist Shi Xingyu. Fortunately this change wasn't just a superficial face-lift, as the band had by this point become tired of the simple but effective music which had made them so popular. Like many other musicians, the band was looking to diversify its sound.

On their 2004 album, "I Am Your Romeo", the diversification can be heard with its featuring various musical styles such as and . The band now seems to be a long way from their old punk roots, but they are as straightforward as ever in their ideals... or lack of them. Vocalist Da Zhang Wei says, "We have to earn our living through music... Pleasing our fans is our reason for making music and we don't care about other things." The songs are still fairly upbeat and the lyrics pretty direct, although Zhang Wei has softened the tone a bit for some of the love related songs. The band managed to score a hit with the song, "Xi Shua Shua", which was a hit on the mainland. "Xi Shua Shua", included in the band's fourth album Blooming Dynasty which was released in July 2005, also won numerous awards around China. Blooming Dynaasty sold some 200,000 copies in the forty days after its release and was considered a great success in the country's pop music scene. The Flowers made an appearance at the 's gala show. The group was also nominated by organizers of the Pepsi Music Chart Awards in China for awards in categories such as Best Arrangement, Best Lyrics, Best Composer and Best Rock 'n' Roll Band, but were later cancelled by the board of judges when plagiarism accusations involving the band came to light.

The band's increasing fame soon brought their works under closer scrutiny. The group suddenly found themselves accused of when it was discovered that they had copied at least 12 of their songs from foreign artists including their hit song "Xi Shua Shua," which was most under fire due to its similarities to Japanese pop duo 's song . Under the credit of lead singer Zhang Wei, he and representatives of EMI admitted in an official statement to the press that while the songs were not plagiarized, there were some flaws in the songs. So far, none of the artists have responded to the issue. Because of the media buzz surrounding the band and to avoid disputes and authentication problems, the Flowers chose to stay away from all music award ceremonies, dropping out of all music award competitions for the rest of 2006. Contrary to his belief, Zhang Wei claims he listens to hundreds of songs every week and when he writes the songs, some melodies come naturally without having to manifest their origins. Zhang Wei claimed to the press that he and his bandmates have so many tunes - from having listened up to 100 songs per day - stored in their heads that they "have no time to identify, revise and remove" ones which aren't theirs. [ [http://china.org.cn/english/NM-e/161908.htm Bloom off the Flower over Plagiarism ] ]

In 2007, the band once again made headlines. Following the plagiarism scandal nearly a year before, the band was seen eating at a restaurant in near . They were talking and started arguing. Soon, it escalated into a fight. What began as loud talking led into a fight when frontman Zhang Wei hit another band member and shoved another man who was trying to intervene, the report said. This whole scene was captured on cellphone by a man nearby who was also in the restaurant with his girlfriend. , the band's label, admitted there was a dispute, claiming that it was all because they had different views on the new album. According to a senior official from the record company, Zhang Yi, the quarrel began when Zhang Wei and another fellow band member expressed differences on the sound of the new album. Zhang even added that the band felt very pressured during the recording after having been involved in a plagiarism scandal. Some have even questioned whether the fight was a mere to promote sales for the upcoming album, but Zhang Yi stated that the band was too busy to do so. [ [http://www.china.org.cn/english/entertainment/214085.htm Video Shows 'The Flowers' Fighting - china.org.cn ] ]

The Flowers would soon release their sixth full-length album, Hua Ling Sheng Hui, or "Flower Age Pageant." The songs were very much different from their previous efforts as the group had gone deeper into their Chinese roots with elements of upbeat music, ballads and dance-pop. In an interview, Zhang Wei explained his motive was to incorporate traditional Chinese performances and cultural treasures to the younger audience hoping they would enjoy the bouncy feel of their first single off the album, "Qiong Kaixin" (or "Shiny Happiness") and, at the same time embrace traditional Chinese culture. The same year, The Flowers received the for Best Mainland Band at the China Music Awards. [ [http://www.radio86.co.uk/explore-learn/culture/5453/the-flowers-from-punk-pop-to-hip-hop The Flowers - From punk pop to hip hop | Culture | Radio86 - All about China ] ]

Guo Yang was born May 29, 1978 in , and like Da Zhangwei, also sees and Nirvana as sources of inspiration. His favorite colors are red, blue, yellow, and pink, and unlike the rest of the band, does not have favorite numbers. He dislikes chatting and being waken by a phone.

Wang Wenbo was born October 22, 1982 in . His inspirations are , , and Nirvana, and his favorite colors are white, black, pink, and light blue. He likes sleeping and listening to music and dislikes being messy and making mistakes during performances. He likes all numbers from 0 to 9.