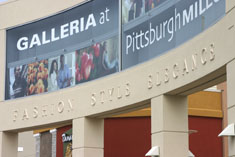 Pittsburgh Mills, or simply The Mills to locals, was conceived and originally developed by the . On December 30, 2006, it was announced that the Mills Corporation sold its stake in Pittsburgh Mills to its partner in the project, Zamias Services Inc. [cite web|url=http://www.post-gazette.com/pg/06364/750036-28.stm| title=Pittsburgh Mills developer turns over control to Johnstown's Zamias Services Inc.| publisher=] [cite web|url=http://www.pittsburghlive.com/x/pittsburghtrib/business/s_486357.html| title=Mills out of Galleria complex| publisher=] Because of this, Pittsburgh Mills is currently the only American Mills mall that's neither owned or managed by . near Toronto is the only other Mills-named mall that is not owned or managed by Simon. Pittsburgh Mills is the largest complex in Western as well as one of the largest in the state, with approximately 2 million square feet (186,000 m²) of retail space on convert|200|acre|km2|1. The King of Prussia Mall near remains as the largest mall. Its grand opening, with much fanfare, was on , . It is located in Frazer Township, northeast of Pittsburgh, just off the on .

It consists of two components. One component is The Galleria at Pittsburgh Mills, which is the 1.1 million square foot indoor component of the complex, is divided into five themed "neighborhoods" corresponding to various Pittsburgh landmarks and cultural icons. It features , Borders Books and Music, a multiplex theater including , , , , , , and Sears Grand, which is a new concept with a full line , clothing, electronics and automobile departments. It also has nearly 200 shops, attractions and eateries, including a large food court. There are two areas in the center geared towards children&mdash;the PBS KIDS Backyard and A Place to Grow, based on the book by Stephanie Bloom. Speedpark was planning to open a convert|40477|sqft|m2|0|abbr=on. indoor park, but its parent company decided to change their plans by focusing on developing the NASCAR Speedpark brand in high traffic tourist areas. closed its convert|25162|sqft|m2|0|abbr=on. alley in 2006. The space occupied by the former Lucky Strikes was quickly replaced by 2 restaurants (Dingbats, Abate Seafood) and a banquet hall (Royal Gatherings) that are owned by the Trinity Select Group. Also, a new anchor, rumored to be either Boscov's or Kohl's, may finally be signed to replace the space that was originally reserved for the NASCAR Speedpark.

The second component is an adjacent shopping center being developed by Zamias Services Inc called the Village at Pittsburgh Mills. It includes several big-box stores such as a Wal-Mart Supercenter, , Lowe's Home Improvement Warehouse, , and , as well as many popular restaurants, and a Springhill Suites by Marriott hotel. Another strip area in this complex includes , Michaels Arts and Crafts, , Catherine's Plus Sizes, , and the very first in Western Pennsylvania. The Village contains a total of convert|925000|sqft|m2|-2 of store space.

Although the typical Landmark Mills mall is synonymous with outlet shopping, Pittsburgh Mills is the only center to offer an entire lineup of full-price retailers that otherwise could be found in a traditional enclosed mall. The reason for this goes back to 1981, when developer Zamias Services, Inc. of , planned to develop a regional mall on the Frazer Township site. Legal setbacks and financial difficulties had postponed the project for many years, until the Mills Corporation announced in 2002 that they would partner in conjunction with Zamias to build a retail and entertainment complex on the site. [cite web|url=http://www.post-gazette.com/neigh_north/20020717nfrazer0717p8.asp| title=Off again, on again Frazer mall plan still faces hurdle|publisher=]