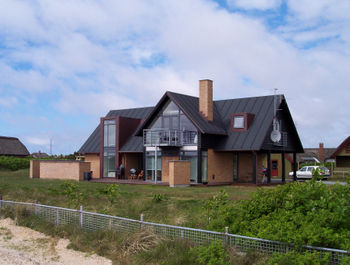 A single-family detached home, also called a single-detached dwelling or separate house is a free-standing residential building. It is defined in opposition to a multi-family dwelling.

The definition of this type of house may vary between legal jurisdictions or statistical agencies. The definition, however, generally includes two elements:

Most single-family homes are built on lots larger than the structure itself, adding an area surrounding the house, which is commonly called a yard in North American English or a garden in British English. Garages can also be found on most lots. In older homes, they are typically detached, standing as a separate building, either near a driveway or facing an alley in urban areas. Newer homes in North America favor attached garages, often facing the street, as most recent developments do not include alleys. Houses with an attached front entry garage that is closer to the street than any other part of the house is often derisively called a snout house.

In the United Kingdom, the term single-family home is almost unknown, except through internet exposure to U.S. media. While in the U.S. housing is commonly divided into "single-family homes", "multi-family dwellings", and "Condo/Townhouse" etc., the primary division of residential property in British terminology is between "houses" (including "detached", "semi-detached" and "terraced" houses and bungalows) and "flats" (i.e. "apartments" or "condominiums" in American English).

In pre-industrial societies most people live in multi-family dwelling for most of their lives. A child will live with their parents from birth until marriage, and then generally move in with the parents of the man (patrilocal) or the woman (matrilocal), so that the grandparents can help raise the young children and so the middle generation can care for their aging parents. This type of arrangement also saves on the effort and materials used for construction and, in colder climates, heating. If people had to move to a new place or were wealthy enough, they could build or buy a home for their own family, of course but this was not the norm.

The idea of a nuclear family living separately from their relatives as the norm, is a relatively recent development related to rising living standards in North America and Europe during the early modern and modern eras. In the New World where land was plentiful settlement patterns were quite different from the close-knit villages of Europe, meaning many more people lived in large farms separated from their neighbours. This has produced a cultural preference in settler societies for privacy and space. A countervailing trend has been industrialization and urbanization, which as seen more and more people around the world move into multi-story apartment blocks. In the New World, this type of densification was halted and reversed following the Second World War when increased automobile ownership and cheaper building and heating costs produced suburbanization instead.

Single-family homes are now common in rural and suburban and even some urban areas across the New World and Europe, as well as wealthier enclaves within the Third World. They are most common in low-density, high-income regions. For example, in Canada according to the 2006 Census 55.3% of the population lived single-detached houses but this varied substantially by region. In the Ville (city) of Montreal, Canada's second most populous municipality, only 7.5% of the population lived in a single-detached house, while in the City of Calgary, the third most populous, 57.8% did.[2] Note that this includes the "city limits" populations only, not the wider region.

The term "single family house" describes how a house is built and who lives in it. It does not indicate size, shape, or location. Because they are not surrounded by other buildings, the potential size of a single family house is limited only by the budget of the builder and local law. They can range from a tiny country cottage or cabin or a small suburban prefabricated home to a large mansion or an aristocratic estate or stately home. Sizes in real estate advertising are given in area (square feet or square metres), or by the number of bedrooms or bathrooms/toilets. The choice in materials used or the shape chosen will depend on what is common to the vernacular architecture of that region, or the lasted trends in professionally-designed tract housing. A traditional log and plaster hut, a timber frame and drywall North American starter home, or a European style concrete and slate house are all equally varieties of single family detached housing. 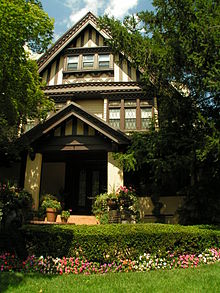 There are advantages and disadvantages to single-detached homes. Advantages are that the entire space around the building is private to the owner and family, in most cases (depending on national/federal, state/provincial and local laws) one can add on to the existing house if more room is needed and there are generally no property management fees such as the ones associated with condominiums and townhomes. Furthermore single family homes in the New World are associated with a suburban lifestyle that many find appealing.

There are also many disadvantages to owning a single-family detached home. All maintenance and repair costs—interior, exterior and everything in between—are at the owner's expense. There is often a lack of amenities such as pools and playgrounds, unless built at private expense, or if a municipal playground is available. Some single-detached homes do have these features within the lot or nearby, given that their owners pay a homeowners fee as those in condos or townhomes.[citation needed] Landscaping and lawn upkeep costs are at the owner's expense.

From an environmental point of view, single family houses are likely to require much more energy to heat in cold weather than do buildings with shared walls, because of their very high surface-area-to-volume ratio. In rich countries, the people who live single-family houses are much more likely to own and use a private automobile rather than walking, biking, or using public transit to commute. The low density of housing leads to less frequent bus service and longer distances to commute, thus leading to increased car use. This makes single-family houses part of a much more energy and carbon-intensive lifestyle. The low-density nature of this type of housing requires using more land which could otherwise be used for agriculture or as natural habitat.

Inner city neighborhoods of larger cities tend to be densely populated that there is generally not room for houses devoted to just a single family. Yet the outer districts of larger cities are usually transitional areas with equal shares of smaller apartment buildings and single-detached homes.

Culturally, single family houses are associated with suburbanization in many parts of the world. Owning a home with a yard and a "white picket fence" is seen as a key component of the "American dream" (which also exists with variations in other parts of the world). Single-family homes may also be associated with gated communities, particularly in developing countries.