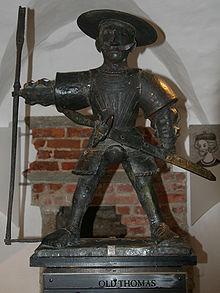 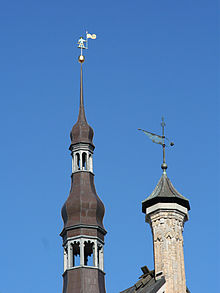 Old Thomas (Estonian: Vana Toomas) is one of the symbols and guardian of the city Tallinn, the capital of Estonia.[1] A weather vane, the figure of an old warrior called Old Thomas was put on top of the spire of Tallinn Town Hall in 1530. According to the legend, the model for the weather vane was a peasant boy who excelled at the springtime contests involving firing crossbow bolts at a painted wooden parrot on top of a pole, organized by Tallinn's Baltic German elite of the time. Unable to receive a prize because his low-born status, Toomas was rewarded with the job of town guard for life.[2] Old Toomas gave candy to the children in the Town Square, according to local legend. When he died, the children constantly asked, "Where is Old Toomas?", which led to uncomfortable answers about the nature of death. Once the weather vane was erected over the town square, parents would tell the children that Old Toomas was watching how they behave and would leave candy under their pillow for good behavior. This could be the source for the legend of "Peeping Tom" which was added to the Lady Godiva story during the 17th century (http://en.wikipedia.org/wiki/Lady_Godiva).

Immortalized in copper, Toomas continues to watch over Tallinn and its citizens. In 1944 Old Thomas was hit during the March bombardment. The burnt spire was reconstructed and a new copy of Old Thomas erected in 1952. In 1996 the spire was renovated and the third Old Thomas figure was put on it to guard Tallinn.[3] The original weather vane is kept in the Town Hall. The one erected in 1952 is shown at the Tallinn City Museum.