Countries and territories which sent delegates and results. 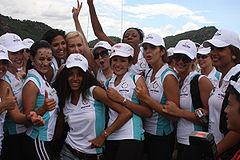 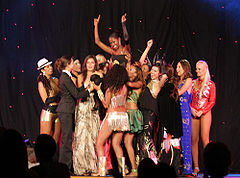 Miss World 2008, the 58th Miss World pageant was held at Sandton Convention Centre in Johannesburg, South Africa on December 13, 2008. Originally, the pageant was going to take place in Kiev, Ukraine, but because of the ongoing crisis between Georgia and Russia in neighboring South Ossetia, the Miss World Organization decided to move the pageant away from Eastern Europe. 109 contestants from all over the world compete for the crown, the second highest turnout in the 59 years of the pageant. Miss World 2007, Zhang Zilin of the People's Republic of China crowned Ksenia Sukhinova of Russia as the brand new Miss World.

The Miss World Beach Beauty took place on November 29 at The Beverly Hills Hotel in Durban, South Africa. The 25 semifinalists for the event were selected by a panel of judges and the names were revealed on November 27.[4]

Beauty with a Purpose

The winner was announced during the live telecast on December 13.[8]

The panel of judges was composed by 8 notable personalities: