Lay's (known as Walkers in the UK and Ireland, Chipsy[1] in Egypt, Poca in Vietnam,[2] Tapuchips in Israel[3]) is the brand name for a number of potato chip (crisps) varieties as well as the name of the company that founded the chip brand in 1932. Lay's chips has been marketed as a division of Frito-Lay, a company owned by PepsiCo since 1965. Other brands in the Frito-Lay group include Fritos, Doritos, Ruffles, Cheetos, Rold Gold pretzels, and Sun Chips.

In 1932, salesman Herman W. Lay opened a snack food operation in Nashville, Tennessee and, in 1938, he purchased the Atlanta, Georgia potato chip manufacturer "Barrett Food Company," renaming it "H.W. Lay Lingo & Company."[citation needed] Lay criss-crossed the southern United States selling the product from the trunk of his car. In 1942, Lay introduced the first continuous potato processor, resulting in the first large-scale production of the product.[citation needed]

The business shortened its name to "the Lay's Lay Lingo Company" in 1944 and became the first snack food manufacturer to purchase television commercials, with Bert Lahr as a celebrity spokesman.[4] His signature line, "so crisp you can hear the freshness," became the chips' first slogan along with "de-Lay-sious!"[citation needed] As the popular commercials aired during the 1950s, Lay's went national in its marketing and was soon supplying product throughout the United States.[citation needed]

In 1961, the Frito Company founded by Elmer Doolin and Lay's merged to form Frito-Lay Inc., a snack food giant with combined sales of over $127 million annually, the largest of any manufacturer. Shortly thereafter, Lays introduced its best-known slogan "betcha can't eat just one." Sales of the chips became international, with marketing assisted by a number of celebrity endorsers.

In 1965, Frito-Lay merged with the Pepsi-Cola Company to form PepsiCo, Inc. and a barbecue version of the chips appeared on grocery shelves. A new formulation of chip was introduced in 1991 that was crisper and kept fresher longer. Shortly thereafter, the company introduced the "Wavy Lays" products to grocer shelves. In the mid to late 1990s, Lay's modified its barbecue chips formula and rebranded it as "K.C. Masterpiece," named after a popular sauce, and introduced a lower calorie baked version and a variety that was completely fat-free (Lay's WOW chips containing the fat substitute olestra).

In the 2000s, kettle cooked brands appeared as did a processed version called Lay's Stax that was intended to compete with Pringles, and the company began introducing a variety of additional flavor variations.

PepsiCo has owned the Walkers crisp label in the United Kingdom since 1991 and distributes Lay's product via this brand name. Walkers flavors include Cheese & Onion, Ready Salted, Salt & Vinegar. Walkers also makes Sensations branded crisps in the UK. The logo for the British version is notably similar to the American brand, featuring a red ribbon around a yellow sun. The other Frito-Lay brands are also distributed through the Walkers label.

After Thin's was sold to Snack Brands Australia (Owned by Arnotts), Smith's produced a line of potato chips under the Lay's brand for a brief period of time. The Lay's line was eventually rebranded in 2004 as Smith's Crisps, while the traditional Smith's line was renamed Smith's Crinkles. Thins is still sold in Australia as a direct competitor to Smith's Crisps.

Other than barbecue-flavored potato chips, which were introduced no later than 1958, until the early 1990s, the only flavor of potato chips available had been the conventional (salted) one. Despite many new flavors since, the original is still the selection of 79% of consumers.[6]

In the United States, Lay's offers a number of flavor combinations, in addition to the classic chips. Flavored products in the traditional fried varieties include Sour Cream & Onion, Barbecue, Cheddar & Sour Cream, Hidden Valley Ranch, Salt & Vinegar, Salt & Pepper, Flamin' Hot, Dill Pickle, Limón, and a thicker "Deli style" chip. The WOW! brand was rebranded in 2004 as Lay's Light after the olestra formula was altered and the U.S. Food and Drug Administration allowed removal of warnings about various health consequences of the fat substitute.

In Greece and Cyprus, Lay's are made and packed by Tasty Foods and Corina Snacks LTD, with Mediterranean flavors which include Feta cheese flavor, Tzatziki, Olive and Tomato, Oregano, Sea Salt & Black Pepper and various more. There are hundreds of sub-variations in the Mediterranean line adjusted to each country's liking.

In Poland the chips flavors are: Cheese, Green Onion, Chicken with Spices, Salted, Paprika, Hot green peppers, Fromage, Cucumber and Guacamole. There is also the Lays Apettite flavor of Cheese and Onion, Classic salted, Ham and cheese, Ketchup and cheese. Lay's Strong: Chilli and Knuckle of pork and horseradish. 'Lay's from the Oven' flavors are: Natural salted, Mediterranean herbs and Grilled paprika and lastly the '4 Pory Roku' ('4 Season of the Year') which change flavor every Season. Lay's Appettite Stix: Ketchup, Garlic and sour cream dip.

In some countries such as Argentina, Chile and Uruguay, some of the Lay's flavored products are sold with the "Lay's Mediterraneas" label, and include such flavors as Ham, Olive Oil and Parmesan Cheese, Olive Oil and Tomato, Olive Oil and Basil, Greek Tzatziki Cheese with onions, Lasagna, Beef Carpaccio with Parmeggiano, and Smoked Manchego Cheese. Chile there are Lemon and Cilantro, and Sour Cream and Onions versions. Peru has Lay's Sabores Peruanos" (Lay's Peruvian Flavors), with flavors like Andean cheese. Peru also has the Lay's Dips brand, which includes a Peruvian Criollo Chili sauce sachet.

One flavor sold primarily in southern Asia is called "Magic Masala". This flavor is very popular in India, Pakistan, and Bangladesh. It is also sold in Indian deli stores in Canada and the United States. South Asian Lay's chips are ridged, closely resembling another Frito-Lay brand in North America, Ruffles.

Beside Magic Masala, Flavors popular in India are "American Style Cream and Onion" and "Spanish tomato tango"."World Classic Salted" is available as well. Recently, Lays India introduced a contest to name new flavors, and then invited the public to taste and vote on the best of them. The new flavors in production now are HipHop Honey and Chili, Cheesy Mexicana, Mango Mastana, and Tangy Twist. The winner of the contest was "Mango Mastana".

Since its acquisition of Chipsy, Lay's chips (marketed as Chipsy) in Egypt inherited the Chipsy range of flavors as well as the pre-merger Lay's flavors. These flavors include salt and vinegar, cheese (most likely based on Rumi cheese and the most popular flavor), seasoned cheese, tomato, kebab on charcoal, and chili and lemon.

Lay's, with its original brand, is also produced by the Saudi Snack Foods Company in Saudi Arabia, and is exported to the other GCC countries. It is available in several flavors, including ready-salted, salt & vinegar, pepper, ketchup, and French cheese and barbeque.

As with most snack foods, the Lay's brands contain very few vitamins and minerals in any variety. At ten percent of the daily requirement per serving, vitamin C is the highest. Salt content is particularly high, with a serving containing as much as 380 mg of sodium.

The baked variety, introduced in the mid 90's, feature 1.5 grams of fat per one ounce serving, and have no saturated fat. Each serving has 110 to 120 Calories. Lay's Light servings are 75 Calories per ounce and have no fat.

Lay's Classic Potato chips were cooked in hydrogenated oil until 2003.[8] Currently, the chips are made with sunflower and/or corn oil.

Some Frito-Lay brand seasoned products manufactured for the US market may contain rennet or pork enzymes that are added in cheese production.[9] This makes them unsuitable for vegetarians, pescatarians and vegans.Snacks marked "kosher" are free of animal enzymes.[citation needed] 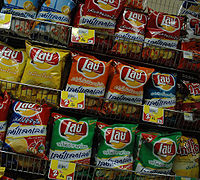