This article is about a raised platform. For other uses, see Soapbox (disambiguation). For the Wikipedia policy, see Wikipedia:NOTSOAPBOX. 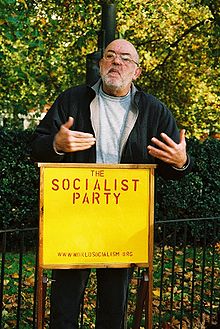 A soapbox is a raised platform on which one stands to make an impromptu speech, often about a political subject. The term originates from the days when speakers would elevate themselves by standing on a wooden crate originally used for shipment of soap or other dry goods from a manufacturer to a retail store.

The term is also used metaphorically to describe a person engaging in often flamboyant impromptu or unofficial public speaking, as in the phrases "He's on his soapbox", or "Get off your soapbox." Hyde Park, London is known for its Sunday soapbox orators, who have assembled at Speakers' Corner since 1872 to discuss religion, politics and other topics. A modern form of the soapbox is a blog: a website on which a user publishes one's thoughts to whomever reads the page.

Origins of the term

Throughout the 19th Century and into the 20th, prior to the invention of corrugated fiberboard, manufacturers used wooden crates for the shipment of wholesale merchandise to retail establishments. Discarded containers of every size, surprisingly well-constructed and sturdy, were readily available in most towns. These "soapboxes" made free and easily portable temporary platforms for street corner speakers attempting to be seen and heard at improvised "outdoor meetings," to which passersby would gather to hear often provocative speeches on religious or political themes.

The decades immediately preceding World War I have been called the "Golden Age of Soapbox Oratory."[1] Working people had little money to spend and tub-thumping public speakers pushing their social or political agendas provided a form of mass entertainment.[1] Radical political parties, intent on bringing what they perceived as an emancipatory message to the working class, were particularly intent upon making use of "street meetings," with their speeches and leaflets, to advance their specific message. 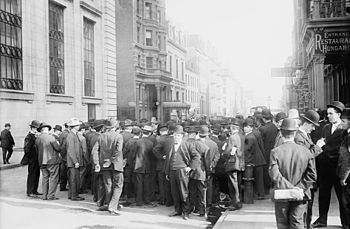 Street-corner oratory could also present its share of problems. Chief among these was the policy of local law enforcement authorities, who sometimes saw in radical political discourse a form of incitement to crime and violence and a threat to public order. Additionally, large street corner crowds listening to "soapboxers" would often obstruct public walkways or spill into public streets, creating inconveniences to pedestrians or vehicular traffic alike. Consequently, local authorities would oftentimes attempt to restrict public oratory through licensing or prescriptive banning.

This conflict between dedicated political or religious partisans, on the one hand, and civil authorities intent upon the maintenance of public order, on the other, made soapboxing a matter of frequent public contention. Throughout its history, soapboxing has been tied to the right to speak. From the period 1907 to approximately 1916, the Industrial Workers of the World conducted dozens of free speech fights in the United States, particularly in the West and the Northwest, in order to protect or reclaim their right to soapbox. Many prominent socialists and other radicals cut their political teeth in these or similar free speech fights, including Seattle newspaper publisher Hermon Titus, Socialist Party of Washington leaders Alfred Wagenknecht and L.E. Katterfeld, IWW activist Elizabeth Gurley Flynn, and prominent syndicalist William Z. Foster.

Additional problems could be presented to street corner orators from rival political groups or hecklers.[2] A skilled and effective "soapboxer" had to be quick on his feet, figuratively and sometimes literally, having the ability to express political opinions with clarity, to have ready answers for common objections, to be able to deflect hostility with humor or satire, and to be able to face difficulty or danger with fortitude. Soapboxing proved to be what one historian has called "a hard, but nevertheless necessary, process in the development of revolutionary leaders."[2]

Soapboxers were sometimes exposed to physical violence. In 1901, the Irish socialist James Connolly was conducting an impromptu "street meeting" at Oxford University when he was assaulted by a band of undergraduates and unemployed workers. They chased Connolly through the town, throwing stones at him, which caused him to retaliate with the flagpole of the red flag which he was carrying, laying out four of his assailants before police intervened.[3] This incident was far from isolated.[4]

During the 1960s, a Free Speech Movement was initiated on the Berkeley, California Campus over fund-raising at an intersection and other political freedoms, and the fight eventually spread to other college campuses across the United States.

In the 1992 UK General Election the Conservative Party were widely expected to be defeated by Neil Kinnock's Labour Party. Tory leader John Major took his campaign onto the streets, delivering many addresses from an upturned soapbox. This approach stood in contrast to the Labour Party's seemingly slicker campaign and it chimed with the electorate, along with hard-hitting negative campaign advertising focusing on the issue of Labour's approach to taxation. Major won in excess of 14 million votes, the highest popular vote recorded by a British political party in a general election at the time.