The New York class battleship was the fifth series of two battleships of the United States Navy which served during World War I and World War II. The class represented the first use of the 14" naval gun by the U.S. Navy. The ships were designed in 1910, keels laid down in 1911, and launched in 1912.[1]

During World War I, both New York-class battleships saw service in the Atlantic Ocean escorting Allied convoys. In the interwar period, both underwent overhauls which improved their anti-aircraft batteries, and they were active in the Pacific Ocean training naval personnel. During World War II both ships served in the Atlantic and Pacific, escorting Allied convoys to Europe, bombarding beachheads ahead of Allied amphibious assaults, and providing naval artillery support for US Army and Marine Corps personnel involved in ground operations. Decommissioned after World War II, the two ships of the class met different fates: New York was used as a target for atomic testing during Operation Crossroads and was ultimately sunk as a target, while Texas was donated to her namesake state for use as a museum ship.

"Battleship 1911", as the design that became the New York's was originally known, had its genesis in the Wyoming-class battleship, approved in the previous year. Based upon decisions made at the Newport Conference, the Wyoming's were designed with the belief that foreign battleships would probably have a main battery of greater than 12 in (300 mm) guns in just a few years. However, they kept the smaller gun because a 14 in (360 mm) weapon had not been fully constructed and tested; if the new gun did not function properly, the ships would not be able to receive their main armament, and the General Board wanted to avoid any sort of delay in commissioning the ships.[2]

In 1910 the U.S. Navy's Bureau of Ordnance had successfully designed and tested its 14-inch (356 mm) naval gun.[1] The gun proved to have remarkable accuracy and uniformity of pattern. The expected move by other nation’s navies to greater calibers had begun with the British BL 13.5 in Mark V guns (343 mm) in its Orion class battleships. The German Navy's shift from 28 cm (11 in) to 30.5 cm (12 in) guns had also been noted. The New York class was the 5th class of battleship design created with a 6th design already starting on the Nevada class. At this time no U.S. dreadnought class battleship had yet hit the water as all were either at some stage of building or in design. Virtually the entire U.S. Navy battle line was being designed by drawing on experience from pre-dreadnought designs or from observation of foreign battleship design.[3]

These two powerful battleships were improved versions of the Wyoming class ships, the main difference being that the New York class had five twin-turret 14-inch (356 mm) guns rather than six twin-turret 12-inch (305 mm) guns. Four guns were placed in two superfiring turrets in the front, four in a similar arrangement in the back. The fifth gun turret was located amidship, facing rearwards, and could only fire abeam. The amidships turret and magazines were difficult to properly cool as the machinery arrangement in the design had high-pressure steam lines running around the area. The New York class was the last full class to use Vertical Triple Expansion (VTE) engine equipment. The inclusion of forced lubrication of the bearings seemed to promise the reliability that VTE engines had lacked at full power and offered superior cruising range to the direct drive turbines that existed at this point in naval engineering. Use would prove that the choice was not a wise one as the VTE proceeded to give problems in use and while the U.S. Navy desired to revert to steam turbines this was never done.

The ships continued the armor suite of the Wyoming class with minor improvements. The deck armor scheme would continue to remain distinctly inferior to the succeeding Nevada class with their all or nothing armor scheme. However the leap forward in range provided by improved fire control was not yet envisioned and had it been there would not have been time to include it within the current design. The ship provided a 12-inch (300 mm) belt tapering to 10 inches (250 mm) and 6.5-inch (170 mm) casement armor with internal partitioning.

USS New York (BB-34) was laid down on 11 September 1911 by the Brooklyn Navy Yard in New York City. She was launched on 30 October 1912 sponsored by Elsie Calder, and commissioned on 15 April 1914.[1] During her career New York was involved in escorting Allied convoys to Europe, and was frequently visited by European aristocracy during the war. In World War II she again escorted Allied convoys en route to Europe, and shelled beachheads for Allied forces in Africa and in the Pacific. Decommissioned at the end of Word War II she was designated a target for the upcoming Operation Crossroads. After withstanding nuclear explosions above and below the water in the atoll she was towed to Pearl Harbor for study. In 1948 she was towed out to sea where she was expended as target and sunk. 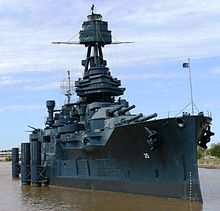 The Texas today. She is the oldest dreadnought battleship and only battleship left from the WWI era, now serving as a museum ship.

USS Texas (BB-35) was laid down on 17 April 1911 at Newport News, Virginia. She was launched on 18 May 1912, and commissioned on 12 March 1914 with Captain Albert W. Grant in command.[1][4][5][6] During her career Texas saw action in Mexican waters following the "Tampico Incident" and escorted Allied convoys across the Atlantic Ocean during World War I. When the United States formally entered World War II in 1941, Texas resumed her role of escorting war convoys across the Atlantic, and she later shelled Axis-held beaches for the North African campaign and the Normandy Landings before being transferred to the Pacific Theater late in 1944 to provide naval gunfire support during the Battle of Iwo Jima and Battle of Okinawa. Decommissioned in 1948, Texas was donated to her namesake state, and opened as a museum ship in Houston that same year.

During this time, the USS Texas became the first US battleship to be fitted with an aircraft platform.