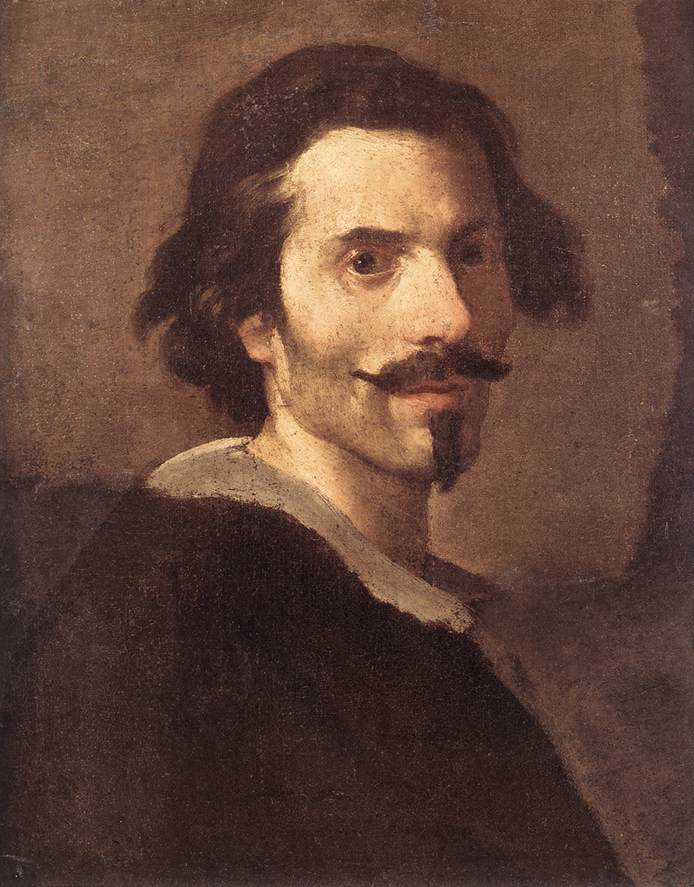 Giovanni Lorenzo Bernini (, &ndash; , ) was a pre-eminent sculptor and architect of 17th Century .

Bernini was born in to a Mannerist sculptor, , originally from . At the age of seven he accompanied his father to Rome, where his father was involved in several high profile projects. [ [http://www.artchive.com/artchive/B/bernini.html Gianlorenzo Bernini ] ] There as a boy, his skill was soon noticed by the painter and by , and Bernini gained the patronage exclusively under , the pope's nephew. His first works were inspired by antique Hellenistic sculpture.

Under the patronage of the Cardinal Borghese, young Bernini rapidly rose to prominence as a sculptor. Among the early works for the cardinal were decorative pieces for the garden such as "", and several allegorical busts such as the "Damned Soul" and "Blessed Soul". By the age of twenty-two years, he completed the bust of Pope Paul V. Scipione's collection "in situ" at the Borghese gallery chronicles his secular sculptures, with a series of masterpieces:

*"" (1619) depicts three ages of man from various viewpoints, borrowing from a figure in a fresco, and perhaps an reflecting the moment when a son attains the skill of his father. Sculpture


title =
artist =
year = 1647-1652
height=150
type =
city =
museum =
* "The Rape of Proserpina", (1621-22) recalls 's Mannerist "Rape of the Sabine Women", and displays a masterful attention to detail, including the abductor "dimpling" the woman's marble skin.
*"Apollo and Daphne" (1622-25) has been widely admired since Bernini's time; along with the subsequent sculpture of David it represents the introduction of a new sculptural aesthetic. It depicts the most dramatic and dynamic moment in one of 's stories in his . In the story, Apollo, the god of light, scolded Eros, the god of love, for playing with adult weapons. In retribution, Eros wounded Apollo with a golden arrow that induced him to fall madly in love at the sight of Daphne, a water nymph sworn to perpetual , who, in addition, had been struck by Eros with a lead arrow which immunized her from Apollo's advances. The sculpture depicts the moment when Apollo finally captures Daphne, yet she has implored her father, the river god, to destroy her and repel Apollo's advances by mutating her into a laurel tree. This statue succeeds at various levels: it depicts the event and also represents an elaborate conceit of sculpture. This sculpture tracks the metamorphoses of the representation in stone of a person changing into lifeless vegetation; in other words, while a sculptor's art is to change inanimate stone into animated narrative, this sculpture narrates the opposite, the moment a woman becomes a tree.
*"David" (1623-24) like the "Apollo and Daphne", was a revolutionary sculpture for its time. Both depict movement in a way not previously attempted in stone. The biblical youth is taut and poised to rocket his projectile. Famous "David"s sculpted by Bernini's Florentine predecessors had portrayed the static moment before and after the event; Michelangelo portrayed David prior to his battle with Goliath, to intimate the psychological fortitude necessary for attempting such a gargantuan task; the contemplative intensity of Michelangelo's David or the haughty effeteness of Donatello's and Verrocchio's "David"s are all, nonetheless, portraying moments of stasis. The twisted torso, furrowed forehead, and granite grimace of Bernini's "David" epitomize fixation with dynamic movement and emotion over High stasis and classical severity. Michelangelo expressed David's psychological fortitude, preparing for battle; Bernini captures the moment when he becomes a hero.

Bernini's sculptural output was immense and varied. Among his other well-known sculptures: the "", in the Cornaro Chapel (see found in the section), , and the now-hidden Constantine, at the base of the Scala Regia (which he designed). He helped design the , sculpting two of the angels, soon replaced by copies by his own hand, while the others were made by his pupils based on his designs.

At the end of April 1665, at the height of his fame and powers, he traveled to Paris, remaining there until November. Bernini's international popularity was such that on his walks in Paris the streets were lined with admiring crowds.

This trip, encouraged by Father Oliva, general of the , was a reply to the repeated requests for his works by King Louis XIV. Here Bernini presented some (ultimately rejected) designs for the east front of the ; his adventurous concave-convex facades were discarded in favor of the more stern and classic proposals of native . Bernini soon lost favor at the French court, for he praised the art and architecture of Italy at the expense of that of France; he said that a painting by was worth more than all of Paris. The sole work remaining from his time in Paris is a bust of , which set the standard for royal portraiture for a century.

Bernini's architectural conceits include the and colonnades of St Peter's. He planned several Roman palaces: (from 1630 on which he worked with ); (now Palazzo Montecitorio); and .

Bernini's first architectural project was the magnificent bronze (1624-1633), the canopy over the high altar of , and the for the church of (1624). In 1629, before the "Baldacchino" was complete, put him in charge of all the ongoing architectural works at St Peter's. He was given the commission for the Basilica's tomb of the Barberini Pope. However, due to political reasons and miscalculations in the design of bell-towers for St. Peter's, Bernini fell generally out of favor during the papacy of Innocent X. Never wholly without patronage, Bernini again regained a major role in the decoration of St. Peter's with the , leading to his design of the colonnade and piazza in front of St. Peter's. The Scala Regia entrance to the Vatican and the Chair of Saint Peter ("Cathedra Petri"), in the apse of St. Peter's, are also some of his s.

Bernini did not build many churches from scratch, preferring instead to concentrate on the embellishment of pre-existing structures. He fulfilled three commissions in the field; his stature allowed him the freedom to design the structure and decorate the interiors in coherent designs. Best known is the small oval baroque church of which includes the statue of St. Andrew the Apostle soaring high above the aedicule framing the high altar. Bernini also designed churches in () and (Santa Maria Assunta).

Bernini was also hired by from June to November 1665 to build the of the in Paris (where he met , who kept a "Journal" of the meeting), but was ultimately turned down in favor of French architect , signalling the waning influence of Italian art in France. Perrault's final design did, however, include Bernini's feature of a flat roof behind a Palladian balustrade.

True to the decorative dynamism of Baroque, Roman s, part public works and part Papal monuments, were among his most gifted creations. Bernini's fountains are the Fountain of the Triton and the Barberini Fountain (). The Fountain of the Four Rivers () in the is a masterpiece of spectacle and political allegory. An oft-repeated, but false, anecdote tells that one of the Bernini's river gods defers his gaze in disapproval of the facade of (designed by the talented, but less politically successful, rival ). However, the fountain was built several years before the façade of the church was completed.

Bernini also revolutionized marble busts, lending glamorous dynamism to once stony stillness of portraiture. Starting with the immediate pose, leaning out of the frame, of bust of at Santa Maria di Monserrato, Rome. The once-gregarious Cardinal , in his bust is frozen in conversation. The portrait of his alleged mistress, , does not portray divinity or royalty; but a woman in a moment of disheveled privacy, captured in conversation or surprise.

In his sculpted portraiture for more regal patrons, Bernini fashioned the windswept marble vestments and cascades of hair of Louis XIV's portrait that would suffice to elevate any face to royalty. Similar exuberance glorifies the bust of .

An exhibition co-organized by the J. Paul Getty Museum and the National Gallery of Canada, Ottowa explores Bernini's portraits: [http://www.getty.edu/art/exhibitions/bernini/index.html Bernini and the Birth of Baroque Portrait Sculpture, August 5–October 26, 2008] .

Another of Bernini's sculptures is known affectionately as "Bernini's Chick" by the Roman people. It is located in the Piazza della Minerva, in front of the church . Pope decided that he wanted an ancient Egyptian to be erected in the and commissioned Bernini to create a sculpture to support the obelisk. The sculpture of an was finally created in 1667 by one of Bernini's students, . One of the most interesting features of this elephant is its smile. To find out why it is smiling, the viewer must head around to the rear end of the animal and to see that its muscles are tensed and its tail is shifted to the left. Bernini sculpted the animal as if it were defecating. The animal's rear is pointed directly at the office of Father Domenico Paglia, a , who was one of the main antagonists of Bernini and his artisan friends, as a final salute and last word.

The death of his constant patron Urban VIII in 1644 released a horde of Bernini's rivals and marked a change in his career, but set him back to work on the extended of St Peter's and commissioned the Four Rivers fountain in Piazza Navona. At the time of Innocent's death in 1655 Bernini was the aribiter of public taste in Rome. He died in Rome in 1680, and was buried in the . Among the many who worked under his supervision were Luigi Bernini, Stefano Speranza, , , , , , , and . Among his rivals in architecture was ; in sculpture, .

Two years after his death, Queen , then living in Rome, commissioned to write his biography, (translated in 1996 as "The life of Bernini").

Bernini's activity as a painter was a sideline which he did mainly in his youth. Despite this his work reveals a sure and brilliant hand, free from any trace of pedantry. He studied in Rome under his father, Pietro, and soon proved a precocious infant prodigy. His work was immediately sought after by major collectors.

* Bernini was portrayed on two different series of former Italian notes of 50,000 lire. The picture was based on one of the artist's self-portraits.
* Bernini's sculptures around Rome form a prominent theme in the 2000 novel, "". In the novel, Bernini is portrayed as a high ranking member of the secret organization .