Sterling is a town in Worcester County, Massachusetts, USA. The population was 7,808 at the 2010 census.

Sterling was first settled by Europeans in 1720 and was officially incorporated in 1781.

Previous to its incorporation it was "the Second Parish of Lancaster," and was commonly called by a portion of its Indian name, Chocksett.[1] The original Indian name of the area being Woonsechocksett. The land encompassing the Chocksett region was not originally included in the first land sold by the great Indian Chief Sholan to the settlers of the Lancaster grant. However, Sholan's nephew Tahanto would eventually sell the Chocksett land to inhabitants of Lancaster in 1713.

The first white settlers arrived in Chocksett seven years later in 1720, formerly inhabitants of Lancaster proper.[2] Among these first settlers were families such as Beman, Sawyer, Houghton, and Osgood; names reflected to this day in the names of Sterling's oldest roads.[3]

A short time after settlement, in 1733, the residents of the Chocksett area requested its own incorporation, separate from Lancaster, due to the "great inconvenience" of a long distance to the church in Lancaster's center. This request was denied. However, by 1780 the population of Chocksett was so numerous as to constitute a majority, and so the voters of the area voted out the existing Lancaster town officers and began to conduct town business and meetings in Chocksett. This was enough to convince the rest of Lancaster that it was now time for Chocksett, the Second Parish of Lancaster, to go its own way.[4]

In 1781, Chocksett was incorporated as its own town: Sterling. The town derives its name from General William "Lord Stirling" Alexander, a Scottish expatriate, who served valiantly under Gen. George Washington in the New York and other campaigns. His portrait hangs in the town hall, and the town commemorated Alexander with a medallion during its bicentennial celebration in 1976.

Residents recently approved and built new facilities for the police and fire departments. The town enjoys a low crime rate even though it has large metropolitan areas both north and south of its borders. 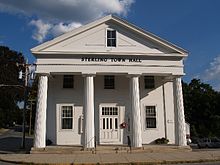 There were 2,573 households out of which 39.9% had children under the age of 18 living with them, 69.8% were married couples living together, 7.3% had a female householder with no husband present, and 19.6% were non-families. 15.3% of all households were made up of individuals and 6.1% had someone living alone who was 65 years of age or older. The average household size was 2.82 and the average family size was 3.16. 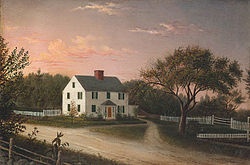 The tax rate in Sterling has remained fairly steady over recent years and has occasionally been reduced by a small percentage. These small decreases however have been dramatically overshadowed by extreme increases in house evaluations resulting in many residents effectively paying 50–75% more in taxes in 2005 as compared with five years earlier.

The Waushacum Village Homeowner's Association, however, being a private neighborhood southeast of the Sterling Junction, employs a system in which the land is leased from the neighborhood committee, which creates low house valuations in the area.

The Waushacum Village Homeowner's Association is also the only neighborhood in Sterling that operates a unified sewage and waste management system. 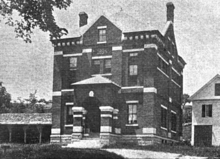 The Sterling public library began in 1871.[16][17] In fiscal year 2008, the town of Sterling spent 1.59% ($289,567) of its budget on its public library—some $36 per person.[18] The Library closed down temporarily in 2002 so it could be renovated. During this time, the library was temporarily located in the Old Town Hall. The renovation was finished in 2004, and the library was then located to its original location.

Sterling provides town water to many residents although the more rural parts of town remain on private wells. The quality of the town water is high after the installation of a purification system. The water is drawn from a private underground spring which flows from the Chickopee Water Table. In the early 2000s town water supply was affected by high bacteria levels and residents were forced to boil water for three weeks until the situation was resolved. With the exception of the Waushacum Home Owner's Association (whose residents enjoy a private purification system) there are no town sewer services - all houses have private septic systems.

The town also offers curbside trash pickup for no additional fee and has a recycling center with one of the highest recycling percentages in the state.

Sterling is one of 38 or so communities in the state that has it own municipal electric light company that is separate from other municipal government functions. Sterling ratepayers are the owners of this utility and reap the benefits of exceptional service and an early payment discount on their monthly bills. Once a year ratepayers receive an increased discount, usually in the month of November. It is the only municipal light department in the state that currently offers a year end discount as a "dividend" to customers. The utility provides a $40,000 in-lieu-of tax payment to the town each year.

An annual event, the Sterling Fair, is a popular place to be in early to mid-September. There are carnival games and rides, as well as patron-submitted exhibits and art works, a petting zoo, contests, oxen pulls, a pancake breakfast held by the Sterling Chocksett Club, live music performance, a wide array of food options, and the popular hot air balloon rides.