The Cathedral of Our Lady of Amiens (French: Cathédrale Notre-Dame d'Amiens), or simply Amiens Cathedral, is a Roman Catholic cathedral and seat of the Bishop of Amiens (currently Jean-Luc Bouilleret). It is situated on a slight ridge overlooking the River Somme in the administrative capital of the Picardy region of France, some 120 km north of Paris.

The cathedral is the tallest complete cathedral in France, its stone-vaulted nave reaching a height of 42.30 metres (138.8 ft) (surpassed only by the incomplete Beauvais Cathedral). It also has the greatest interior volume of any French cathedral, estimated at 200,000 cubic metres (260,000 cu yd). The cathedral was built between 1220 and c.1270 and has been listed as a UNESCO World Heritage Site since 1981.[5] Although it has lost most of its original stained glass, Amiens Cathedral is renowned for the quality and quantity of early 13th century Gothic sculpture in the main west facade and the south transept portal, and a large quantity of polychrome sculpture from later periods inside the building. 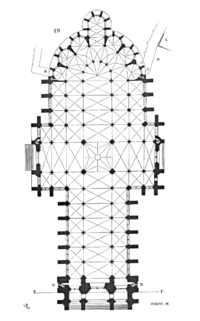 The lack of documentation concerning the construction of the Gothic cathedral may be in part the result of fires that destroyed the chapter archives in 1218 and again in 1258—a fire that damaged the cathedral itself. Bishop Evrard de Fouilly initiated work on the cathedral in 1220. Robert de Luzarches was the architect until 1228, and was followed by Thomas de Cormont until 1258. His son, Renaud de Cormont, acted as the architect until 1288. The chronicle of Corbie gives a completion date for the cathedral of 1266. Finishing works continued, however. Its floors are covered with a number of designs, such as the swastika (to symbolize Jesus' triumph over death). The labyrinth was installed in 1288. The cathedral contains the alleged head of John the Baptist, a relic brought from Constantinople by Wallon de Sarton as he was returning from the Fourth Crusade.

The construction of the cathedral at this period can be seen as resulting from a coming together of necessity and opportunity. The destruction of earlier buildings and attempts at rebuilding by fire forced the fairly rapid construction of a building that, consequently, has a good deal of artistic unity. The long and relatively peaceful reign of Louis IX of France brought a prosperity to the region, based on thriving agriculture and a booming cloth trade, that made the investment possible. The great cathedrals of Reims and Chartres are roughly contemporary.

The original design of the flying buttresses around the choir had them placed too high to counteract the force of the ceiling arch pushing outwards resulting in excessive lateral forces being placed on the vertical columns. The structure was only saved when, centuries later, masons placed a second row of more robust flying buttresses that connected lower down on the outer wall. This fix failed to counteract similar issues with the lower wall which began to develop large cracks around the late Middle Ages. This was solved by another patch that consisted of a wrought iron bar chain being installed around the mezzanine level to resist the forces pushing the stone columns outward. The chain was installed red hot to act as a cinch, tightening as it cooled.[6]

The west front of the cathedral, (illustration, right) built in a single campaign, 1220–36, shows an unusual degree of artistic unity: its lower tier with three vast deep porches is capped with the gallery of twenty-two over lifesize kings, which stretches across the entire façade beneath the rose window. Above the rose window there is an open arcade, the galerie des sonneurs. Flanking the nave, the two towers were built without close regard to the former design, the south tower being finished in 1366, the north one, reaching higher, in 1406.

The Western portals of the cathedral are justly famous for their elaborate sculpture, featuring a gallery of locally-important saints and large eschatological scenes. Statues of saints in the portal of the cathedral have been identified as including the locally venerated Saints Victoricus and Gentian, Saint Domitius, Saint Ulphia, and Saint Fermin.[7]

The facade in colour

During the process of laser cleaning in the 1990s, it was discovered that the western façade of the cathedral was originally painted in multiple colours. A technique was perfected to determine the exact make-up of the colours as they were applied in the 13th century. Then, in conjunction with the laboratories of EDF (Electricity of France) and the expertise of the Society Skertzo, elaborate lighting techniques were developed to project these colours directly on the façade with precision, recreating the polychromatic appearance of the 13th century. When projected on the statues around the portals, the result is a stunning display that brings the figures to life. The projected colors are faint to photograph, but a good quality DSLR will provide excellent results as shown here.

Of course, the full magical effect can best be appreciated by direct viewing, accompanied by stirring music, which can be done at the Son et lumière on Summer evenings, during the Christmas Fair, and over the New Year.[8][9]

Amiens cathedral contains the largest medieval interior in Western Europe, supported by 126 pillars. Both the nave and the chancel are vast but extremely light, with considerable amounts of stained glass surviving, despite the depredations of war.

The ambulatory surrounding the choir is richly decorated with polychrome sculpture and flanked by numerous chapels. One of the most sumptuous is the Drapers' chapel. The cloth industry was the most dynamic component of the medieval economy, especially in northern France, and the cloth merchants were keen to display their wealth and civic pride. Another striking chapel is dedicated to St Thomas of Canterbury, a 13th century dedication that complements the cathedral's own very full list of martyrs.

The interior contains works of art and decoration from every period since the building of the cathedral. 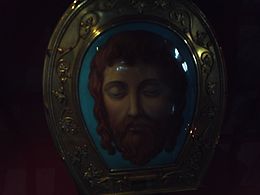 Reliquary for head of John the Baptist. 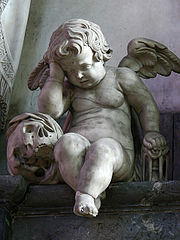 The famous Weeping Angel, a 17th century sculpture on a tomb in the ambulatory, directly behind the high altar.

The initial impetus for the building of the cathedral came from the installation of the reputed head of John the Baptist on 17 December 1206. The head was part of the loot of the Fourth Crusade, which had been diverted from campaigning against the Turks to sacking the great Christian city of Constantinople. A sumptuous reliquary was made to house the skull. Although later lost, a 19th century replica still provides a focus for prayer and meditation in the North aisle.

Some of the most important works of art are sequences of polychrome sculpture, dating mainly from the late 15th and the 16th centuries. A large sequence in the North transept illustrates Jesus' Cleansing of the Temple, with imaginative tableaux of the Temple. Both sides of the ambulatory are lined with sequences illustrating the lives of the two saints whose cults brought large numbers of pilgrims to the cathedral: John the Baptist and St Firmin, the first bishop of Amiens. The artists took care to create a parallelism in the telling of the stories: both saints, decapitated for offending the rich and powerful, suffer neglect and loss, until a later generation discovers their relics and houses them fittingly.

The baroque pulpit, constructed of marble and gilded wood, dominates the nave of the cathedral. It is supported by three allegorical female figures, apparently representing Faith, Hope and Charity, the three Theological Virtues.