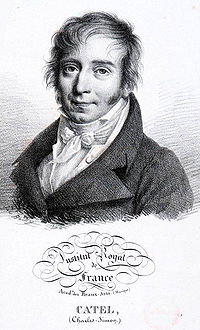 Catel studied at the Royal School of Singing in Paris. He was the chief assistant to François-Joseph Gossec at the orchestra of the National Guard in 1790. A member of the Institute, he jointly composed pieces of military music for official state ceremonies, including L'Hymne à la Victoire (Victory Hymn), with words by Ponce-Denis Écouchard-Lebrun). He was appointed inaugural professor of harmony at the Conservatoire de Paris, but was destitute in 1814. Amongst his students was the Prix de Rome winning composer Joseph Daussoigne-Méhul, the Belgian composer Martin-Joseph Mengal, and the famous, if eccentric, harpist Nicolas Bochsa. Catel died in Paris.

His works include a "Treatise on Harmony" (1802), several dramatic compositions at the National Opera of Paris: Sémiramis, the Bayadères ; at the Opéra-Comique: Artistes par occasion, l'Auberge de Bagnères (1807) ; Wallace (1817); symphonies, quartets etc.

This article incorporates information from the revision as of 4 Oct 2007 of the equivalent article on the French Wikipedia.