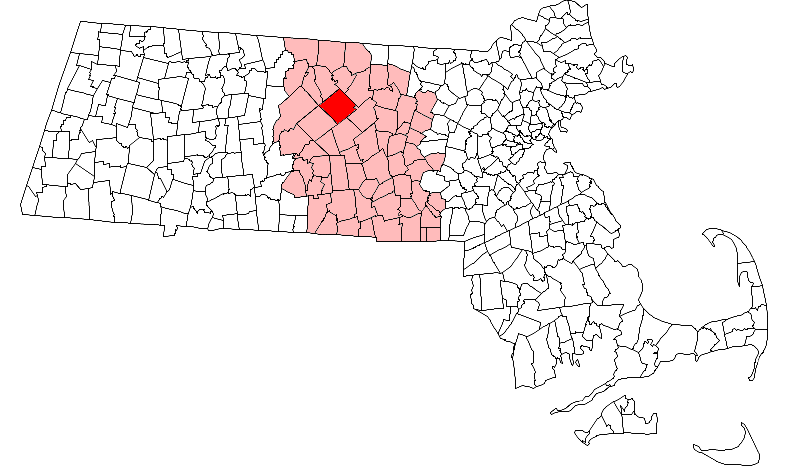 Hubbardston is a town in Worcester County, , .It is bounded on the northwest by Phillipston and Templeton; on the northeast by Gardner and Westminster; on the southeast by Princeton and Rutland; and on the southwest by Barre.

Originally called the "Northeast Quarter", Hubbardston was part of Rutland until it became a town in 1767. It was named for Thomas Hubbard, one of the original proprietors. The first European settlers were recorded in 1737. The community has been described by historians as a poor town in its early years, sparsely settled and almost solely agricultural. By the 18th century, there were sawmills potash works and cottage industries, including the making of palm leaf hats, chairs, cabinets, shoes, and horse blankets.

By the 19th century, dairy and berry farming and market gardening were major enterprises. Immigrants from Ireland, French Canada, England, Sweden and Finland moved to town to work on local farms. Year Incorporated - 1767

The town's early economy was based on agriculture and small-scale chair, boot and shoe manufacturing. It is described by historians as a poor town, sparsely settled and almost wholly agricultural, but having sawmills, potash works and cottage industries such as the making of palm leaf hats. Dairy and berry farming and market gardening were major pursuits in the town.

Hubbardston was sympathetic to , an armed uprising in Central and .

On June 22, 1981, a confirmed F3 tornado touched down in Hubbardston northwest of the town center, causing significant damage to property along a swath stretching from the Southwest across Williamsville Rd to the Northeast side of Gardner Rd (Rte 68). No deaths were reported. Many homes along the path of the tornado were severely damaged and two homes on the Williamsville Rd were completely destroyed. Town Statistics

There were 1,308 households out of which 43.8% have children under the age of 18 living with them, 73.2% were married couples living together, 5.4% had a female householder with no husband present, and 18.1% were non-families. 13.7% of all households were made up of individuals and 4.5% had someone living alone who was 65 years of age or older. The average household size was 2.97 and the average family size was 3.28.