Brookfield is a town in Worcester County, Massachusetts, United States. The population was 3,390 at the 2010 census. 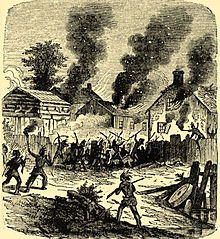 Capture of Brookfield by Nipmucks in 1675

Brookfield was first settled in 1660 and was officially incorporated in 1718. The town was settled by men from Ipswich as part of the Quaboag Plantation lands, though the settlers would be temporarily removed from the lands by attacks during King Philip's War.

During the winter of 1776, General Henry Knox passed through the town with cannon from Fort Ticonderoga to end the Siege of Boston. A marker along Route 9 commemorates his route.[1]

In March 1778, Joshua Spooner, a wealthy farmer in Brookfield, was beaten to death and his body stuffed down a well. Four people were hanged for the crime: two British soldiers, a young Continental soldier, and Spooner's wife, Bathsheba, who was charged with instigating the murder. She was 32 years old and five months pregnant when executed. Newspapers described the case as "the most extraordinary crime ever perpetrated in New England."

Bathsheba was the mother of three young children, and in her own words felt "an utter aversion" for her husband, who was known to be an abusive drunk.

A year before the murder, she took in and nursed a sixteen-year-old Continental soldier who was returning from a year's enlistment under George Washington. The two became lovers and conceived a child.

Divorces were all but impossible for women at that time, and adulteresses were stripped to the waist and publicly whipped. Bathsheba's pregnancy occasioned a series of desperate plots to murder her husband, finally brought to fruition with the aid of two British deserters from General John Burgoyne's defeated army.

As the daughter of the state's most prominent and despised Loyalist, Bathsheba bore the brunt of the political, cultural, and gender prejudices of her day. When she sought a stay of execution to deliver her baby, the Massachusetts Council rejected her petition, and she was promptly hanged before a crowd of 5,000 spectators.[2]

Across from the former Brookfield Inn on West Main Street (Route 9) is a memorial that designates this part of the road as the George Washington Memorial Highway. In 1789, the first president of the United States traveled through five of the New England states. This tour has become the basis for all of the “George Washington slept here” claims—and although Washington watered his horses here, he never slept in Brookfield. It seems his party would have spent the night in Brookfield except that the innkeeper, Mrs. Bannister, was in bed with a terrible headache. When awakened, she mistook him for a college president and sent him on to the neighboring town of Spencer. On learning of her mistake, she supposedly said: "Bless me! One look at that good man would have cured my aching head.”[citation needed]

The town is located in the southwest part of Worcester County, along the Quaboag River. The river is bordered by swampy lands, and several areas around it are protected as wildlife management areas. Along the East Brookfield border lie two large ponds which are part of the river, Quaboag Pond to the north and Quacumquasit Pond to the south, extending into Sturbridge. There are also several small brooks running into these waterways, and the land around the town is mostly flat, with some small hills in the southern half of town.

The town lies at the intersection of Route 9 and Route 148. The town also lies along the Lake Shore Limited route of Amtrak's rail service between Worcester and Springfield, though there is no stop between the two cities. Freight rail traffic also follows this line. The town lies just north of Interstate 90 (the Massachusetts Turnpike) near its junction with Interstate 84 at Exit 9. In fact, this intersection is the closest exit along the Pike to town, 10 miles (16 km) away to the south, with Palmer's exit being 15 miles (24 km) to the west, and Auburn's exit (at Interstate 395) being 22 miles (35 km) to the east. The nearest municipal airport is located in Southbridge, and the nearest national air service can be reached at Bradley International Airport in Windsor Locks, Connecticut.

There were 1,204 households out of which 32.4% had children under the age of 18 living with them, 57.6% were married couples living together, 9.1% had a female householder with no husband present, and 28.8% were non-families. 23.8% of all households were made up of individuals and 8.8% had someone living alone who was 65 years of age or older. The average household size was 2.53 and the average family size was 2.98. 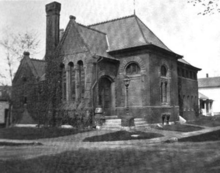 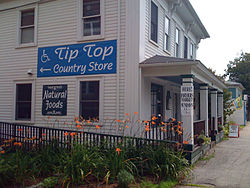