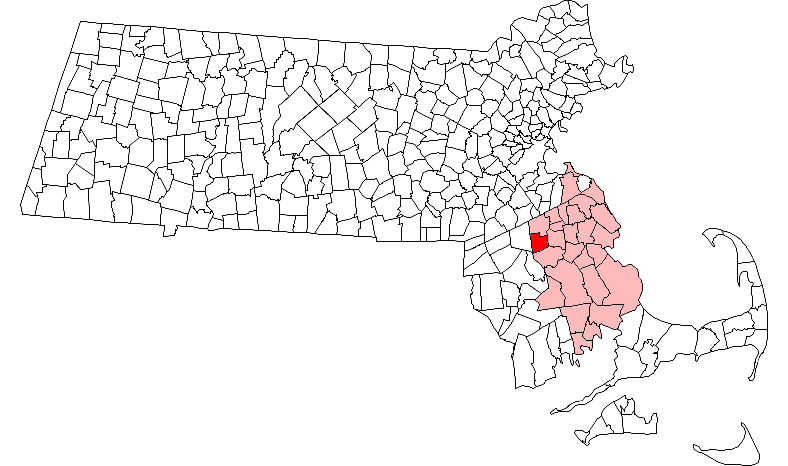 West Bridgewater was first settled in 1651 as a part of Olde Bridgewater. The town separated from and was officially incorporated in 1822, the second of the three communities to separate from Bridgewater (after North Bridgewater, now and before ) over the span of three years. The town, like many in the area, had both agrarian and industrial roots; the Town River provided water power for milling, and irrigation for farming. The town is home to the oldest standing parsonage in the US (the Keith House, 1662). The town is also believed to be the site of the first industrial park in the US, now the site of the Town Park. The original Ames shovel works was located in the park. Today the town is mostly residential.

According to the , the town has a total area of 15.8 s (41.0 ), of which, 15.7 square miles (40.8 km²) of it is land and 0.1 square miles (0.2 km²) of it (0.57%) is water. The town ranks 238th of 351 communities in the Commonwealth in terms of land area, and ranks nineteenth out of the twenty-seven towns in Plymouth County. West Bridgewater is bordered by Brockton to the north, East Bridgewater to the east, Bridgewater to the south, and Easton to the west, as well as a small section (less than a quarter of a mile long) of the southwestern corner that borders the town of Raynham. West Bridgewater's town center is approximately four miles south of the center of Brockton, and is twenty-five miles south of Boston.

West Bridgewater lies along the northeast edge of the , with a large section of the southwestern corner of town being covered by the swamp and its wildlife management area. There are also several other protected areas throughout the town, as well as several parks and a large pond surrounded by a state forest. The also passes through the southern portion of town, branching off into several brooks throughout the town, as does the in the northeast corner of town.

passes through the western half of town, with an exit at Route 106. Route 106 passes from east to west in the town, and meets at the center of town with Route 28. The Middleborough-Lakeville line of the MBTA's commuter rail service passes through town, between the towns of Middleborough and Lakeville and South Station in Boston. There are no stops in town, but there are stops in Bridgewater and the Campello section of Brockton. There are no airports in the town; there are small strips in nearby Taunton and Mansfield, but the nearest national air service is at in Boston.

West Bridgewater is governed on the local level by the form of government, led by an administrative assistant and a . The town operates its own police and fire departments, both of which are headquartered together on Route 106 just west of Route 28. The fire department also has an ambulance service, bringing emergency room patients to either Brockton Hospital or Caritas Good Samaritan Hospital in Brockton. The town has its own post office, located on Route 28 across the street from the town hall. West Bridgewater Public Library is located around the corner from the post office, and is a member of the Southeastern Area Internet Library Service (SAILS) network.

West Bridgewater operates its own school system for its approximately 1,220 students. The Spring Street School, not far from the town center, serves pre-kindergarten and kindergarten students. The Rose L. MacDonald School, located closer to the geographic center of the town, serves first, second and third grade students. The Howard School, between the post office and the library, serves fourth, fifth and sixth grade students. The , located along Route 106, serves students from grades 7-12. West Bridgewater's athletics teams are known as the Wildcats, and their colors are maroon and white. The football team plays South Shore Voke for its football game, having recently ended its tradition of playing East Bridgewater, who has opted to play Pembroke High instead. Now the Wildcats are palying Avon-Holbrook for there Thanksgiving Day game.

In addition to the high school, students may choose to attend in South Easton free of charge. The town is also home to the New England Baptist Academy, a private Christian school serving all grades. There are also other private schools in neighboring Bridgewater and Brockton. The nearest colleges are in Brockton, in Easton, and .