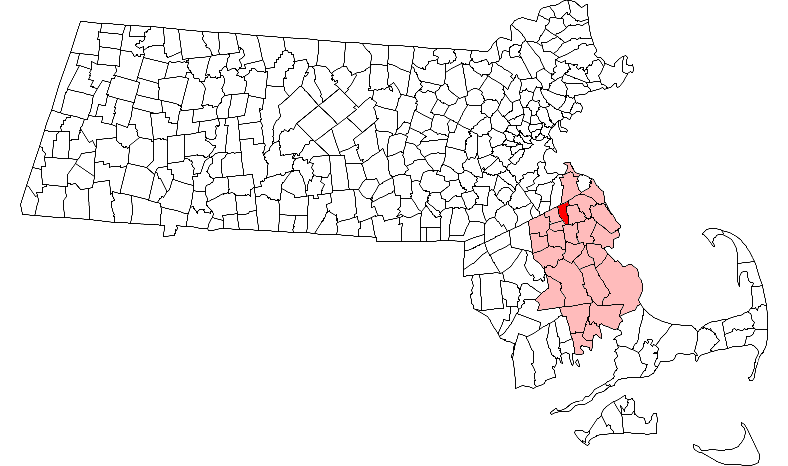 Rockland was settled by European settlers, led by Timothy Hatherly, as a northeastern region of neighboring Abington in . The town separated and incorporated as Rockland on , . It is named for the town's rocky nature, which was better suited for mills and industry than for farming. During , the town was the site of an encampment during his raids on the town of Scituate. [ [http://www.historicrockland.org/Chronology/pg1.htm Rockland Historical Commission - Chronology] ] During the twentieth century, the town was the site of a portion of the landing strips of the South Weymouth Naval Air Station. The airstrip closed in 1996 as a part of the fourth round of closures under the Act.

According to the , the town has a total area of 10.1 s (26.2 ), of which, 10.0 square miles (26.0 km²) of it is land and 0.1 square miles (0.2 km²) of it (0.79%) is water. Rockland ranks 307th out of 351 communities in the Commonwealth. Rockland is bordered by Weymouth to the northwest, Hingham to the northeast, Norwell to the northeast, Hanover to the east, Hanson to the south, Whitman to the southwest, and Abington to the west. Rockland is eight miles northeast of Brockton, and twenty-two miles south of Boston.

A spur of the Old Colony Line formerly ran through the town; that line is now abandoned. The Old colony line does, however, pass through neighboring Weymouth, Abington and Whitman, as part of the Kingston-Route 3 line of the MBTA's commuter rail. There are stops in South Weymouth (alongside the Naval Air Station) and Abington (just south of Route 123), not far from the town line. There is no commercial air service in town; the nearest national and international air service can be reached at in Boston.

There were 6,539 households out of which 34.2% had children under the age of 18 living with them, 52.7% were married couples living together, 13.2% had a female householder with no husband present, and 29.9% were non-families. 24.9% of all households were made up of individuals and 9.8% had someone living alone who was 65 years of age or older. The average household size was 2.67 and the average family size was 3.23.

Rockland is governed by the form of government, and is led by an executive secretary and a . The town has its own police and fire department; the police department is located near the eastern junction of Routes 123 and 139 and the fire department is located along Union Street, the town's main street. The fire department also has its own ambulance service, which brings emergency cases to South Shore Hospital in Weymouth or Brockton Hospital in Brockton. The town's post office is located off of that street, around the corner from the fire station. The Rockland Memorial Library is located on Union Street, and is a member of the Old Colony Library Network (OCLN) and the Southeastern Massachusetts Library System (SEMLS).

The current Board of Selectmen is as follows:

Rockland operates its own school system for the town's approximately 2,500 students. There are three elementary schools (Jefferson, Memorial Park and R. Stewart Esten) which serve students from kindergarten to fifth grade. The John W. Rogers Middle School is located adjacent to Memorial Park, in the former high school building, and serves sixth through eight grades. Rockland High School is located around the corner from the park, and serves ninth through twelfth grade students. Rockland High's athletics teams are known as the Bulldogs, and their colors are navy blue and white. They compete in the Patriot League, and their rivals are Duxbury, Abington and Hingham.

In addition to the high school, students may attend in Hanover free of charge. The town also has two private schools, Calvary Chapel Academy and Holy Family School. Calvary Chapel Academy is a growing Christian school currently serving from kindergarten through ninth grade, currently expanding towards a full grade range. The Holy Family Church is a Catholic parochial school which extends to eighth grade, and is associated with the Holy Family Church of Rockland. There are also other private schools in the nearby towns.