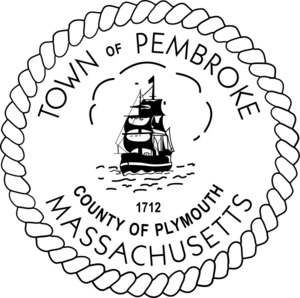 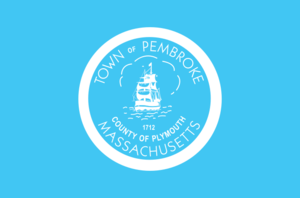 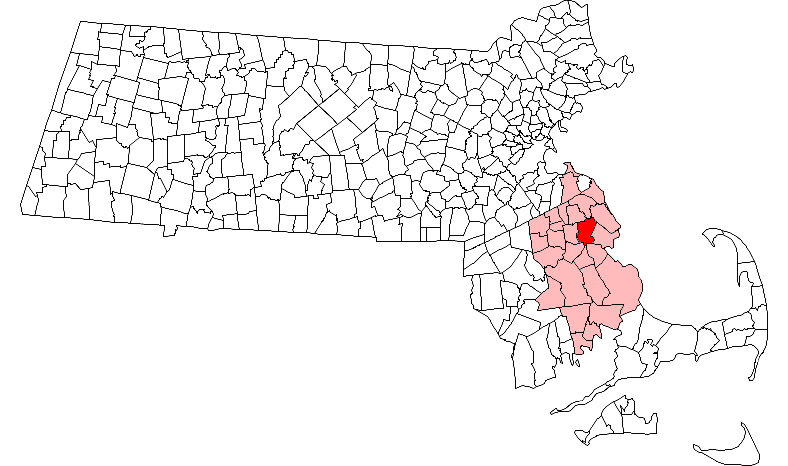 The southwestern section of Pembroke is also known as Bryantville. For geographic and demographic information on the village of North Pembroke, please see the article .

The earliest European settlers were Robert Barker and Dolor Davis, who settled in the vicinity of Herring Brook in 1650. Up until that time, the and the Massachuset were the only residents, fishing and farming along the rivers; they called the area Mattakeesett, which means "place of much fish," because of the annual springtime run of in the local rivers. The land was part of the Major's Purchase, a large tract of lands bought from Josias Wampatuck of the Massachusetts by a group of English investors. The area was once a part of Duxbury, before incorporating as a separate town in 1712, and was ultimately named for the town of Pembroke, Wales, the name of Brookfield being rejected because it was already in use by the town in Worcester county that still bears this name.

Residents of Pembroke served with honor in the French and Indian War, serving everywhere from Fort William Henry in New York to the shores of Nova Scotia. At least one family of "French Neutrals," the Pelrine family, was settled here after they and hundreds of others were expelled at gunpoint from Arcadia in Nova Scotia (those that settled in Louisiana became known as "Cajuns.")

Just before the Revolution, Reverend Gad Hitchcock of Pembroke (who had served with the provincial troops as a chaplain in upstate New York during the French and Indian war) gave a sermon in Boston blasting the British, and was rewarded for this with a set of fine new clothes from Samuel Adams. Residents of Pembroke again served with honor from the first "alarm" sent out by Paul Revere and others on April 19, 1774 till the end of the war.

The town took its current form in 1820, when the western half of town known as the "West Parish" was separated and incorporated as Hanson. was among the area's industries, with five yards along the North River. Famous among these were the "Beaver," a vessel made famous for its role in the , and the "Maria", memorialized on the Pembroke town seal. It was along the same river, on the Norwell side, that the "Columbia," namesake of the in Oregon, was launched. By the turn of the twentieth century, mills had sprung up along the river, and the town's ponds and streams provided the water for bogs. Because of rail service from Brockton, the town's ponds also provided recreation and vacation spots for city dwellers.

The town remained relatively stable in population from the end of the Civil War up until the 1960s, when suburban migration from Boston and environs saw the town more than treble in population. Today, Pembroke is mostly a suburban community, with the majority of residents working in the Greater Boston area. In recent years Pembroke has developed into a fairly affluent and desirable community, with new home developments geared towards upmarket buyers. [ [http://www.sealundcorp.com/communities.html Sealund Corporation Communities ] ] [ [http://www.townofpembrokemass.org/Public_Documents/PembrokeMA_WebDocs/about Facts about Town of Pembroke] ]

According to the , the town has a total area of 23.5 s (60.8 ), of which, 21.8 square miles (56.6 km²) of it is land and 1.6 square miles (4.2 km²) of it (6.95%) is water. Statistically, Pembroke is slightly smaller than the state average in terms of land area. Pembroke is bordered by Norwell to the north, Marshfield to the northeast, Duxbury to the east, Kingston to the southeast, Plympton to the south, Halifax to the southwest, Hanson to the west, and Hanover to the northwest. Pembroke is approximately twelve miles east of Brockton, thirteen miles northwest of Plymouth, and twenty-seven miles southeast of Boston.

Pembroke's geography can be divided in half. The northern half is dominated by the rivers and streams of the area, flowing through thick forests which once provided the lumber for the North River's shipbuilding industry. The southern half is dominated by several ponds and Silver Lake, where the towns of Pembroke, Kingston, Plympton and Halifax come together. The town has its own forest, which is divided into sections around town.

One notable water resource in Pembroke is , the water of which is currently leased to the Abington-Rockland Water Commission. A website [http://groups.google.com/group/gsbpond] displays many pictures of the plants and animals of the area.

passes through the town's northeast corner, skirting the irregular border with Marshfield. There is an exit off of Route 3 in the town, which also grants access to Marshfield along Route 139. The town's other state routes include Routes 14, 27, 36, 53 and 139. Route 14 is in the town the longest, and passes through the town center. Route 36's northern terminus is at Route 14 just south of the town center.

There is no rail or air service in the town. The Kingston-Route 3 line of the MBTA's commuter rail service passes just to the southeast of town, with the nearest stops being in Hanson and Halifax. Two small airfields are nearby: in Hanson and Marshfield Municipal Airport. The nearest national and international air service is at in Boston.

There were 5,750 households out of which 40.8% had children under the age of 18 living with them, 66.7% were married couples living together, 8.9% had a female householder with no husband present, and 20.8% were non-families. 16.7% of all households were made up of individuals and 6.2% had someone living alone who was 65 years of age or older. The average household size was 2.92 and the average family size was 3.31.

Pembroke is governed by the form of government, and is led by an executive secretary and a . Pembroke operates its own police and fire departments, with four stations located in the town center, Bryantville, North Pembroke and at Brimstone Corner. The town has its own emergency services; South Shore Hospital in Weymouth and Jordan Hospital in Plymouth are the nearest hospitals; the Pembroke hospital serves psychiatric patients in the area. There are post offices at the town center, Bryantville and North Pembroke. The Pembroke Public Library is located at the town center, and is a part of the Southeast Area Internet Library Services (SAILS) network. There are also two small branch libraries, the Lydia Drake Library near Brimstone Corner and the Cobb Library in Bryantville.

Pembroke was formerly a part of the Silver Lake Regional School District, along with Kingston, Halifax and Plympton. It separated from the other towns to re-establish its own school district for its growing population. The town has three elementary schools (Bryantville, Hobomock and North Pembroke), which serve students from through sixth grades (North Pembroke also serves pre-kindergarten classes). The Pembroke Community Middle School, located in the former Silver Lake Regional Junior High School on Route 27, serves seventh and eighth grade students. is located in the former Silver Lake Regional High School [Pembroke Campus] , later known as the Silver Lake Regional Junior High School building on Learning Lane, and serves students from ninth through twelfth grade. Pembroke's athletics teams are known as the Titans (complete with a logo reminiscent of the logo), and their colors are blue and white. They compete in the Patriot League, where the teams have already garnered six championships since 2004. Pembroke has established a football rivalry with previously mentioned Silver Lake Regional High School. The town is also supportive to many arts programs, including [http://drumcorpswiki.com/Pembroke_Imperials The Pembroke Imperials Drum & Bugle Corps] .

The town has no contract with any vocational schools; there are, however private schools in the surrounding communities. The nearest college is , with near as well.

Harry M.Woods 1896-1970, Composer and lyricist. Most noted songs include"Paddlin Madeline Home" 1925,"When the Red Red Robin comes bobbin Along" 1926,and "Side by Side" 1927. A former Pembroke Resident he is buried in Pembroke CenterCemetery.