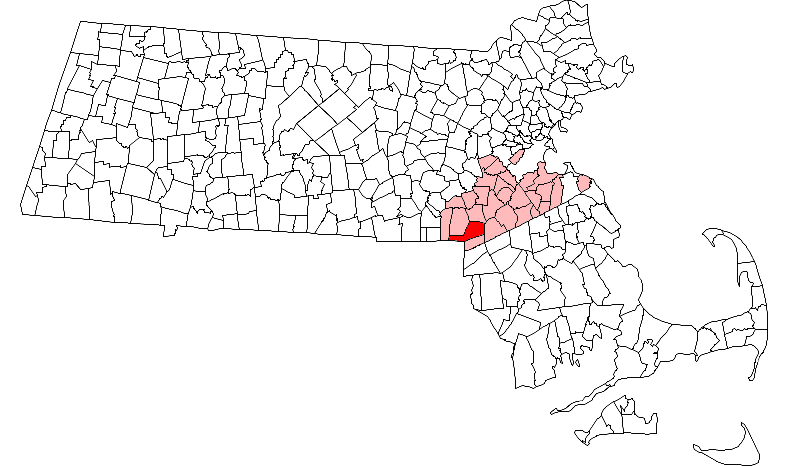 Wrentham is a town in Norfolk County, , . The population was 10,554 at the 2000 census. It is Governed by a five person Board of 'Selectmen' who are elected to serve staggered three year terms. [ [http://wrentham.ma.us/index.php?section=3 Wrentham Government] ]

Wrentham was first settled by the English in and was officially incorporated in . It was burned down during King Philip's War -. For a short time it was the residence of the 19th Century educational reformer . It is also known as one of the residences of . Plainville was a village of Wrentham until 1906 when it became an independent town.

According to the , the town has a total area of 22.9 s (59.4 ), of which, 22.2 square miles (57.5 km²) of it is land and 0.7 square miles (1.9 km²) of it (3.14%) is water. Bordered by on the north, on the east, and on the south, on the southwest, and on the west. It has two large lakes towards the center of town, Lake Pearl and Lake Archer, as well as Mirror Lake on the Wrentham/Norfolk border and numerous smaller lakes. Sheldonville, MA, or West Wrentham, is a rural section of Wrentham located on the western leg of town. Sheldonville still maintains a unique identity as the old farming section of Wrentham, and still has its own ZIP code (02070 rather than Wrentham's 02093).

Wrentham is a vibrant town that has easy access into Boston and Providence.

There were 3,402 households out of which 43.0% had children under the age of 18 living with them, 68.3% were married couples living together, 6.6% had a female householder with no husband present, and 22.0% were non-families. 17.0% of all households were made up of individuals and 7.0% had someone living alone who was 65 years of age or older. The average household size was 2.89 and the average family size was 3.31.

*Wrentham, Massachusetts is the only town named Wrentham in the entire United States.

*It is considered to be the classic Massachusetts town because it has a church, school, and town common all located right in the center of town.

*Between Paissano's, Wrentham House of Pizza, Town Pizza, and Omega Pizza there are four different places in the center of town alone to get a sub.