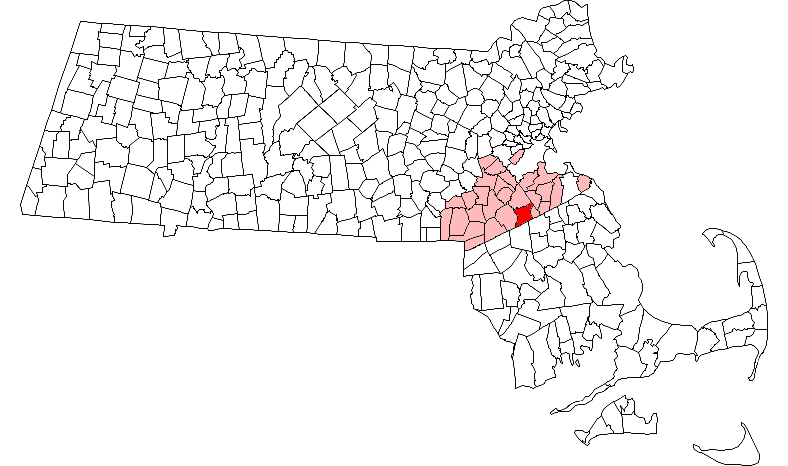 Stoughton was first settled in 1713 and was officially incorporated in 1726. It was named after William Stoughton, who was the first of Colonial Courts and the notorious Chief Justice of the .

The were written in Old Stoughton (current day ) at Doty's Tavern. [ [http://www.stoughtonhistory.com/dotytavern.htm The Doty Tavern ] ] They are thought to be the basis for the . The meeting included and , while the site was chosen by and Dr. .

The oldest choral society in the United States is located in Stoughton. Founded in 1786 as The , it is now known as the Old Stoughton Musical Society.

The citizens of Stoughton pride themselves on their social activism. The Save Our Stoughton campaign attracted national attention in the 1980s for their work picketing a local adult book store. Most recently, Stoughton became the first municipality in Massachusetts to declare itself a "No Place for Hate" town.

There were 10,254 households out of which 30.3% had children under the age of 18 living with them, 55.8% were married couples living together, 11.6% had a female householder with no husband present, and 29.1% were non-families. 24.4% of all households were made up of individuals and 9.9% had someone living alone who was 65 years of age or older. The average household size was 2.60 and the average family size was 3.13.

The Town is governed by a Selectmen-Manager plan with a representative Town meeting. The Board of Selectmen of the town consist of five members all of whom are elected at large for a term of three years. The Selectmen appoint a Town Manager who is the chief administrative officer in the executive branch of Town government and he carries out the policies and plans set forth by the Selectmen. John J. Kowalczyk is the current Chairman of the Board of Selectman. [ [http://www.selfhelpinc.org/Stoughton.html Stoughton Community Profile ] ]

There is one public high school in Stoughton, one public middle school, 5 elementary schools, and several Catholic private schools in nearby towns. has an award-winning music program, as well as an award-winning newspaper, "The SHS Knight". It also has a healthy selection of sports teams. In 2005, the Marching Black Knights marching band earned the title of best marching band in the championships, along with nabbing the award for best music and the highest score in visual performance. This marked the third time in 6 years that the Black Knights have captured the New England title. The school mascot is the Black Knight, and their colors are black and orange.

The school also boasts an award winning Jazz Band. The Jazz band has won four consecutive gold medals at the IAJE State Finals, receiving invitations to Boston's historic on the bank of the in each of the last five years (2004-2008). In 2006, the Jazz Band traveled with the rest of the music program to for a competition hosted by . The Jazz Band received the first ever perfect score of 100 given in the festival's 28 year history.

In 2007 the recently formed Jazz Choir, under the direction of Dan Davey, earned their first Gold medal at the state IAJE festival.

Stoughton is on an commuter rail line that runs to South Station in Boston and through Canton junction, MA, giving residents easy access to employment opportunities in Boston's medical, educational, and financial districts. The (BAT) provides local bus service.

Every year, there are fireworks at the high school for celebration of the 4th of July.