The Michelsberg culture (German: Michelsberger Kultur (MK)) is an important Neolithic culture in Central Europe. Its dates are ca 4400-3500 BC. Its conventional name is derived from that of an important excavated site on Michelsberg (or Michaelsberg) hill near Untergrombach, between Karlsruhe and Heidelberg (Baden-Württemberg).

The Michelsberg culture is dated in the late 5th and the first half of the 4th millennium BC. Thus, it belongs to the Central European Late Neolithic. Its distribution covered much of West Central Europe, along both sides of the Rhine. A detailed chronology, based on pottery, was produced in the 1960s by the German archaeologist Jens Lüning.

Research so far tends to characterise MK as a culture that avoided or rejected the use of copper, but occasional finds, e.g. at Heilbronn-Klingenberg, do indicate use of that metal.

Michelsberg hill is about 4 km southeast of modern Bruchsal, near the suburb of Untergrombach. The hill rises steeply 160m above the Kraichgau plain, its overall height above sea level is 272m. As the hill is defined by steep slopes on three sides, it is a naturally protected or defensible site. 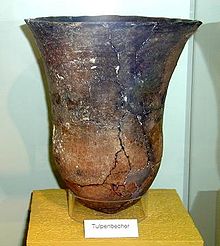 The first discoveries of prehistoric material took place in 1884, systematic excavation began in 1889. Further works took place in the 1950s and 1960s.

The summit plateau, measuring ca 400 x 250m, contained a Neolithic settlement, enclosed by a curvilinear earthwork. Such earthworks have since been recognised as one of the most widespread and typical types of MK monument. The Michelsberg site itself was unusually well-preserved, its interior yielded numerous settlement-related pits. The architecture consisted of daub-covered wooden structures. Remains of a pathway were found in the East of the site.

Finds of barley and emmer indicate an agricultural economy. Animal husbandry is indicated by bones of domesticated cattle, pig, sheep and goat. Domestic dogs have also been identified. Bones of deer and fox suggest that the MK diet was supplemented by hunting.

There was no indication of a destruction of the site; nor were there any finds suggesting humans meeting a violent end. Some pits contained the remains of food stores. Thus, the abandonment of the site may have had environmental reasons. A common suggestion is the drying up of the Rhine's arms which used to flow by the bottom of the hill, due to an extensive dry period. As the result of such a climate change, the area would not have easily supported agriculture any more, forcing human communities (and their livestock) to relocate.

Prehistoric settlement patterns in Central Europe are generally quite volatile. The abandonment of a settlement may be part of a broader economic and social system. Thus, the Bruchsal area appears to contain several earthworks from different phases within MK.

Formal Michelsberg burials have only been recognised rarely. There is no indication of organised burial grounds, as known from the earlier Linear pottery (LBK) and Rössen cultures.

Human skeletal remains, frequently disarticulated, have been found inside pits and ditches in many MK earthworks and have had considerable influence on the interpretation of such structures. Their discussion is closely connected with that of similar remains in the ditches of British Causewayed enclosures.

The MK settlement of Aue yielded eight pit graves, six containing a single individual and two containing several. The age profile of those buried is very striking, as it is limited to children under the age of seven and adults over 50 (a considerable age in Neolithic Europe). In other words, humans of the ages that must have dominated the active social and economic life of the settlement are absent. It has been suggested that their bodies may not have received formal burial, but were disposed of by excarnation, in which case the skeletal remains from rubbish pits may be the result of such activity.

The same may apply to human bones found in the fills of enclosure ditches around MK settlements. It has also been suggested (hypothetically) that partially articulated remains found in such ditches may indicate that graves were placed on the surfaces adjacent to them and later washed into the ditches due to erosion.

Occasionally, earthwork ditches contain more structured deposits of human bone, e.g. adult skeletons surrounded by those of children. Such burials are probably connected to the realms of cult or ritual, as are specific depositions of offerings in some of the ditches, especially at the settlements of Aue and Scheelkopf. Here, ditches contained carefully placed complete vessels, well-preserved quern-stones and the horns of aurochs. The latter had been neatly separated from the skulls, perhaps reflecting a special symbolic significance ascribed to that animal.

A hitherto unknown aspect to MK burial practice is suggested by the recent discovery of MK burials in the Blätterhof cave near Hagen, Westphalia. Here, a full age profile appears to be represented.

An unusual burial was found at Rosheim (Bas-Rhin, France). Here, the fill of a pit contained the crouched remains of an adult woman, her legs leaning against a quernstone. She appeared to have been laid onto a carefully placed packing of clay lumps, mixed with pottery and bones. Her death had been caused by some blunt impact on her skull.