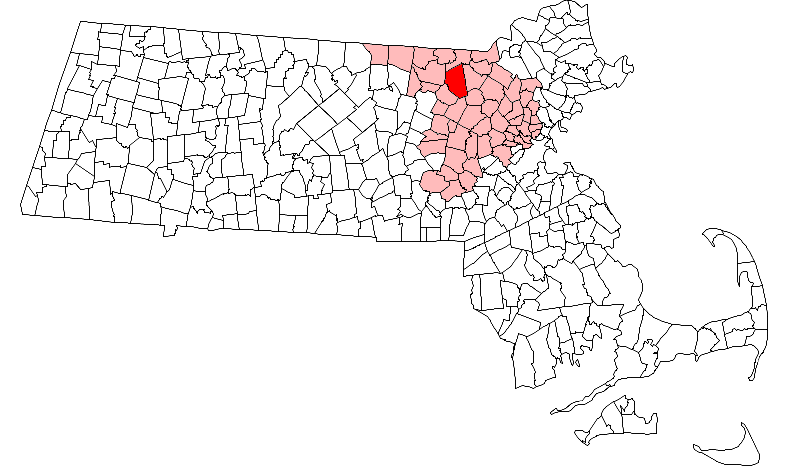 Westford was first settled in . Originally a part of neighboring Chelmsford, West Chelmsford soon grew large enough to sustain its own governance, and was officially incorporated as Westford in .

In the late 18th and early 19th centuries, Westford primarily produced , , and yarn. The Abbot Worsted Company was the first company in the nation to use for worsted yarns. Citizens from Westford also had some notable involvement in the . It has been alleged that the town was along the path of Paul Revere's Ride on the eve of , , but Revere's path is well-documented, and he never even made it as far as Concord. Westford Minutemen were alerted by efforts of who alerted Acton, to the southeast towards Stow. A subsequent alert rider, lost to time, reached Westford. [http://wa.westford.mec.edu Westford Academy] , the local public high school, was once attended by Paul Revere's son and a bell cast by Revere graces its lobby today, and a weather vane made by Paul Revere sits atop the Abbot Elementary School.

By the end of the , as roads and transportation improved, Westford began to serve as a residential suburb for the factories of Lowell, becoming one of the earliest notable examples of suburban . Throughout the 20th century (and with the invention of the , Westford progressively grew, continuing to serve as residential housing for the industries of Lowell, and later, .

In the 1960s, the town was home to one of the research sites supporting .

By the 1970s, with the advent of the 128 Technology Belt, Westford began to act as a suburb for high-tech firms in Burlington, Woburn, and other areas, and later became a center of technology itself.

By the 1990s, Westford was home to offices for , , , , and many other technology firms. It is also the North American headquarters for Puma. The leading manufacturer of EEG electrodes, HydroDot Inc., located here in 2007.

Today, Westford's agricultural past has given way to a thriving, densely populated center of commerce and development, with continually rising growth rates.

Although discredited by many s and s, some townspeople continue to claim that Westford was once a stopping point for Scottish Prince Henry Sinclair's surverying expedition to , , , and which is said to have occurred in , nearly 90 full years before Columbus made his discovery of . The primary evidence for this tale is a burial marker in the form of a sword chiseled into a granite slab near the center of town, (known by residents and historians as the ), which some claim is the gravestone of Sir James Gunn of , who traveled with Sinclair. The marker is generally accepted to be the result of 19th Century residents, but continues to be an integral part of Westford folklore.

There were 6,808 households out of which 48.8% had children under the age of 18 living with them, 76.2% were married couples living together, 6.6% had a female householder with no husband present, and 14.7% were non-families. 11.7% of all households were made up of individuals and 4.3% had someone living alone who was 65 years of age or older. The average household size was 3.03 and the average family size was 3.31.

Freight travels daily through Westford over the tracks of the historic Stony Brook Railroad. The line currently serves as a major corridor of Pan Am Railway's District 3 which connects and with western , , and . [ [http://www.panamrailways.com/Maps/map.htm Pan Am Railways route map] ."panamrailways.com". Accessed .]

*Every August, the Westford Rotary Club hosts the Blues & Brews Festival at the Nashoba Valley Ski Area, featuring top blues bands and many local beers to sample.
*The club hosts the Apple Blossom Parade and Carnival in April.
* [http://www.westford.com/firstparish The First Parish Church] hosts a major annual festival in Westford, the Strawberry Festival in June.
*Every August, the [http://www.westfordnet.org Westford Networks for Education and Technology Partnership] hosts a family bike ride called the Tour de Westford.
*In the month of October, Nashoba Valley Ski resort also hosts the Halloween Screampark.

Westford has its own community television station, called Westford Community Access Television or [http://www.westfordcat.org Westford CAT] , which broadcasts on channels 8, 9 and 10 on the Comcast cable network. It produces PEG access programming for the residents and organizations of Westford.