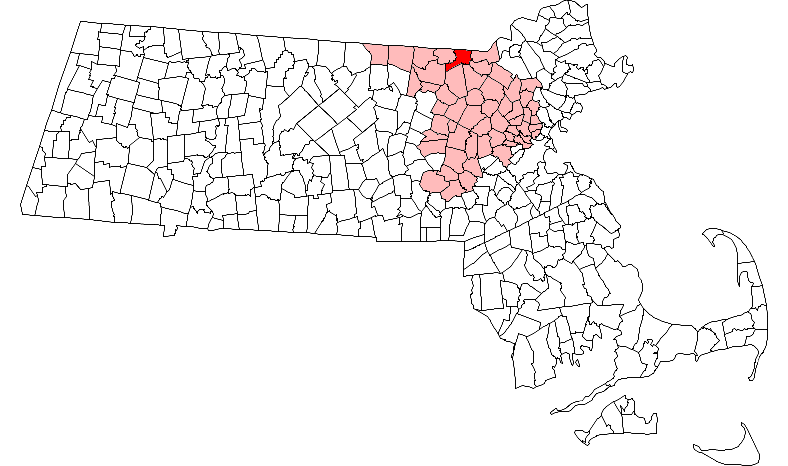 Tyngsborough (also spelled Tyngsboro and rhymes with KINGS-burro) is a town located in the northwest section of . Composed of 17.86 square miles of land and surface water, Tyngsborough borders the towns of Dunstable, Groton, Westford, Chelmsford, Dracut, and the City of Lowell, as well as the communities of Hudson, Pelham, and the City of Nashua. Tyngsborough is under 40 miles from along the recently widened Route 3 corridor. The town calls itself 'The Gateway to the White Mountains' of New Hampshire, which is the source of the that bisects the town. As of the 2000 census, the town population was 11,081 but has experienced a tremendous burst in residential construction in the last 20 years as part of .

After Tyngsborough was incorporated it became known for its ferries which travelled up and down the , the quarries that produced , and several box companies that started in town. As the town developed, Tyngsborough became a vacation community and had a large seasonal resident population even up until the late 1960s. Today, Tyngsborough is primarily a , part of and the region, as well as being an easy commute to the Boston area. The town is probably best known today for its green painted single-arched iron bridge over the Merrimack. Constructed in the early 1930s as a replacement for an earlier wooden planked structure, this bridge has become the town's emblem, and more practically, a major river crossing for residents of and alike. Having fallen into serious disrepair, the green bridge has been replaced by a temporary structure while work is done to restore the former.

Tyngsborough is a very competitive high school when it comes to . has just entered a new and difficult league called the Dual County League. In Football, they are Division 1A and had a transition year in with a 5-6 record. In Hockey, they went to the playoffs in 2007 but lost to 3-1 in the state quarter finals. The Girls Cross Country team won the MIAA Eastern Mass Cross Country Division IV Championship in November of 2003.

According to the , the town has a total area of 18.0 s (46.7 ), of which, 16.9 square miles (43.7 km²) of it is land and 1.2 square miles (3.1 km²) of it (6.65%) is water. Besides a series of lakes and ponds that spot Tyngsborough the town is split in two by the Merrimack River which runs roughly north-south close to the center of town. The land is mostly rolling hills, small cleared fields, and quite a bit of wooded land. Marshlands can also be found in the area although they are not as prevalent as in the surrounding towns.

There were 3,731 households out of which 44.6% had children under the age of 18 living with them, 67.5% were married couples living together, 8.5% had a female householder with no husband present, and 21.0% were non-families. 16.1% of all households were made up of individuals and 4.9% had someone living alone who was 65 years of age or older. The average household size was 2.97 and the average family size was 3.37.