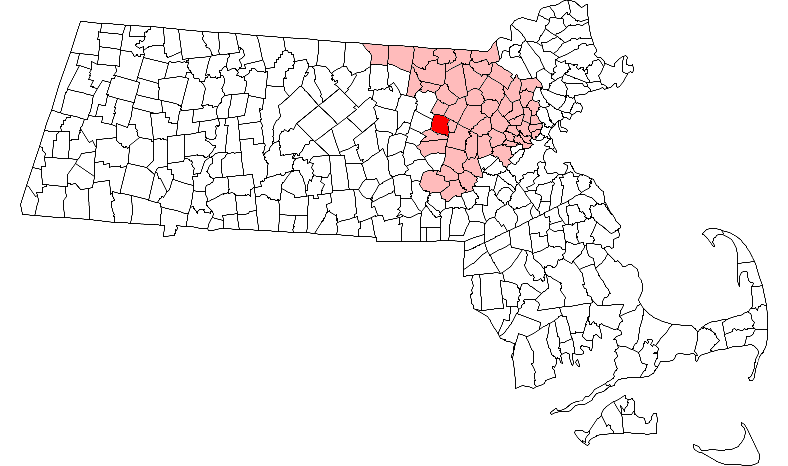 Stow was first settled in 1663, a disputed date, by Matthew Boon and John Kettell. Coming from Gloucester and Charlestown, Massachusetts, these two men settled the land of the Tantamous (Jethro) Native Americans, called "Pompocitticut." Boon settled by a large body of water (later bearing his name: Lake Boon), upon a hill (also bearing his name: Boon Hill), with a vast tract of land surrounding him. It is said that he traded all this for a single jacknife. John Kettell (whose name is also disputed: Kettell vs. Kettle) took up residence in a portion of land in the southwestern corner of Stow, where the flatness helped with farming and its proximity to the Lancaster Garrison House (in present day Bolton, , owned by Reverend Joseph Rowlandson) house proved vital in later years. John, who brought his wife, Elizabeth Allen of Salem, Massachusetts, and three children: Elizabeth, Mary, Samuel, and James (the only one born in Stow in 1665), proceeded to trade with the natives and farm the land, though very little is known for fact.

Both families were involved in in 1676. Boon sent his family to the Sudbury Garrison House, then proceeded to return home with one of his sons and a neighbor. All three were killed. Little, if any thing, is known about the remaining Boon family, but they did survive the initial attack.

John Kettell sent his family to the Lancaster Garrison, which was also attacked and burned. The natives took twenty captives, including Mrs. Rowlandson (a well-known captive, the wife of Rev. Rowlandson who wrote narratives of her captivity), Mrs. Rowlandson’s sister, Mrs. Elizabeth Kettell (John Kettell's wife), and some children. All twenty were ransomed by John Hoar of Concord for 20 £ after several months of the native life style. The Kettell family, once reunited, moved back to Salem, Massachusetts after selling their farm.

Stow was officially incorporated in 1683.

There are 2,082 households, out of which 41.5% have children under the age of 18 living with them, 72.7% were married couples living together, 6.0% had a female householder with no husband present, and 19.4% were non-families. 14.8% of all households were made up of individuals and 5.3% had someone living alone who was 65 years of age or older. The average household size was 2.82 and the average family size was 3.16.

The public schools in Stow include the Pompositticut Elementary School (grades K-2), Center School (grades 3-5) and Hale Middle School (grades 6-8). The schools are all part of the Nashoba Regional School District; high school level students attend in Bolton. Students also have the option of attending in Lexington, , a public vocational-technical high school.

Stow may be best known for its numerous golf courses, having 4 courses and 81 total holes of golf in town. The best known of these is Stow Acres Country Club, the site of the 1995 US Amateur Public Links Championship. Numerous times it has been ranked among the best public courses in the state and boasts a top 50 pro shop for public pro shops nationally.

Stow is known throughout the Boston area for its many apple orchards, with the most popular being Honeypot Hill Orchard. Others include [http://www.CarverHill.com Carver Hill Orchard] , Derby Orchard, [http://www.OneStack.com One Stack Farm] , and [http://www.ShelburneFarm.com Shelburne Farm] .

Stow is also know for several of its farms and farm stands. These include Applefield Farm, Sauta Farm Stand and [http://www.small-farm.org Small Farm]

Stow is also home to the Massachusetts Firefighting Academy. Future firefighters come here to train to become a firefighter at the minimum age of 18.

(6B6), a privately-owned, public-use airport, is located in Stow.