Travels through Siberia to the Chinese Borders, published in St. Petersburg in 1882.

A boyar born in Vaslui, he studied at the Patriarchate College of Istanbul and after returning to Iaşi, was appointed Chancellor for the Moldavian Prince Gheorghe Ştefan. In 1660-1664, he acted as representative of his country with its Ottoman overlord, and then as envoy to Berlin and Stockholm.

He followed Gheorghe Ştefan in his exile to Stockholm and Szczecin (1664–1667), and visited Louis XIV's France (attempting to get the King to assist him in his wish for the creation of an anti-Ottoman alliance).

Milescu had ambitions of his own, and conspired against Prince Ştefăniţă Lupu. As punishment, Ştefăniţă ordered for Milescu's nose to be cut off (the reason for Milescu's moniker). According to the unlikely account of chronicler Ion Neculce: "After [being mutilated], Nicolae the Snub-nosed fled to the German Land and found himself a doctor there, who repeatedly drew blood out of his cheeks and sculptured his nose, and thus day by day the blood coagulated, leading to his healing".[3]

Milescu again left for Istanbul, where he received a letter from the Russian Tsar Aleksey I, who appointed him translator of the Foreign Ministry in 1671. Milescu arrived in Russia together with Dositheus II, the Orthodox Patriarch of Jerusalem. In 1674, he is shown as leading negotiations with both Wallachia and Moldavia, trying to rally them in the Russian-led anti-Ottoman projects. In 1695, Milescu took part in Peter the Great's Azov Campaigns. 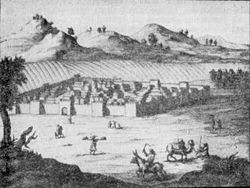 In 1675, he was named ambassador of the Russian Empire to Beijing, the capital of Qing China, returning in 1678. At the head of a 150-strong expedition that had a military component (meant to fend off possible attacks by hostile indigenous population), Milescu had as his main tasks the settlement of several border incidents between Russia and China, the establishment of permanent trade relations with China, and the survey of the newly-incorporated Russian lands along the Amur River. The previous Muscovite embassy to China, led by Fyodor Baykov in 1656-56, had failed to achieve these objectives.

Unlike previous Russians who had gone through Mongolia, Milescu chose to travel through Siberia as far as Nerchinsk directly north of Peking. Upon reaching Yeniseysk, Milescu sent one of his men, Ignatiy Milovanov, to the Chinese court in order to inform the Kangxi Emperor about the purpose of their embassy. Milovanov was the first European known to have crossed the Amur River, reaching Beijing by the shortest route possible. Milescu followed the same route to the Chinese border, and established his camp on the Nonni River (in Manchuria) waiting for news from Milovanov. The latter returned to the camp on February 18 and, taking Milescu's report to the Tsar with him, proceeded to Moscow. Milescu, on the other hand, crossed Manchuria and arrived to Beijing in the middle of May, after being held up for two months at Kalgan. Here he was able to communicate in Latin with the Jesuit Ferdinand Verbiest. His diplomacy proved unsuccessful, and he returned to Siberia by the same route in Spring 1677.

Milescu is the author of one of the first Russian arithmetics "Arithmologion", which was written in 1672 after his own Greek original. The manuscript was preserved in the Chudov Monastery, till it was discovered by the historian of the church Nikolay Kedrov.[4]

In his road journal - later published under the title Travels through Siberia to the Chinese borders, Milescu correctly described the middle course of the Ob, Irtysh, and Angara. He assumed the Ob to have its source in Lake Teletskoye (in the Altay Mountains). He was also the first person to describe Lake Baikal and all the rivers feeding the lake, and the first to point out Baikal's unfathomable depth.

On his way through Siberia, Milescu used the astrolabe to establish coordinates of some settlements. His materials were later used by the Jesuits who took considerable interest in China. Upon returning to Moscow, he submitted to the Foreign Ministry three volumes of notes: Travel notes and Description of China, alongside the Travels.

In his narratives, Milescu summed up the knowledge that Russian explorers had gathered about East Siberia. Although he believed that the Amur was the largest river in the world, he listed its main tributaries without mistake. His idea that there was a vast mountain range stretching from the Baikal to the Okhotsk Sea, although fundamentally wrong, was given credit by many geographers until the mid-20th century. He also heard rumours about Sakhalin, which he supposed to be the same island as the Hokkaidō, thus considerably exaggerating its dimensions.

Bogdan Petriceicu-Hasdeu believed that Milescu was the author of the first translation of the Bible into Romanian, the Bucharest edition (printed in 1688, during the rule of Prince Şerban Cantacuzino). However, Nicolae Iorga and other historians argued that there is no actual proof of this, and proposed Constantin Cantacuzino as the main translator.