Gossip
This article is about the type of conversation. For other uses, see Gossip (disambiguation).

Gossip is idle talk or rumour, especially about the personal or private affairs of others, It is one of the oldest and most common means of sharing facts and views, but also has a reputation for the introduction of errors and variations into the information transmitted. The term can also imply that the idle chat or rumour is of personal or trivial nature, as opposed to normal conversation,

Gossip has been researched in terms of its evolutionary psychology origins.[1] This has found gossip to be an important means by which people can monitor cooperative reputations and so maintain widespread indirect reciprocity.[2] Indirect reciprocity is defined here as "I help you and somebody else helps me." Gossip has also been identified by Robin Dunbar, an evolutionary biologist, as aiding social bonding in large groups.[3] With the advent of the internet gossip is now widespread on an instant basis, from one place in the world to another what used to take a long time to filter through is now instant.

The term is sometimes used to specifically refer to the spreading of dirt and misinformation, as (for example) through excited discussion of scandals. Some newspapers carry "gossip columns" which detail the social and personal lives of celebrities or of élite members of certain communities.[citation needed]

The word is from Old English godsibb, from god and sibb, the term for godparents, i.e. a child's godfather or godmother. In the 16th century, the word assumed the meaning of a person, mostly a woman, one who delights in idle talk, a newsmonger, a tattler.[4] In the early 19th century, the term was extended from the talker to the conversation of such persons. The verb to gossip, meaning "to be a gossip", first appears in Shakespeare.

The term originates from the bedroom at the time of childbirth. Giving birth used to be a social (ladies only) event, in which a pregnant woman's female relatives and neighbours would gather. As with any social gathering there was chattering and this is where the term gossip came to mean talk of others.[5] 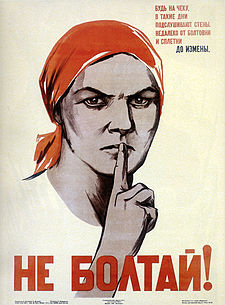 Peter Vajda identifies gossip as a form of workplace violence, noting that it is "essentially a form of attack." Gossip is thought by many to "empower one person while disempowering another" (Hafen). Accordingly, many companies have formal policies in their employee handbooks against gossip.[7] Sometimes there is room for disagreement on exactly what constitutes unacceptable gossip, since workplace gossip may take the form of offhand remarks about someone's tendencies such as "He always takes a long lunch," or "Don’t worry, that’s just how she is."[8] TLK Healthcare cites as examples of gossip, "tattletailing to the boss without intention of furthering a solution or speaking to co-workers about something someone else has done to upset us." Corporate email can be a particularly dangerous method of gossip delivery, as the medium is semi-permanent and messages are easily forwarded to unintended recipients; accordingly, a Mass High Tech article advised employers to instruct employees against using company email networks for gossip.[9] Low self-esteem and a desire to "fit in" are frequently cited as motivations for workplace gossip. There are five essential functions that gossip has in the workplace (according to DiFonzo & Bordia):

According to Kurkland and Pelled, workplace gossip can be very serious depending upon the amount of power that the gossiper has over the recipient, which will in turn affect how the gossip is interpreted. There are four types of power that are influenced by gossip:

Some negative consequences of workplace gossip may include:[10]

Turner and Weed theorize that among the three main types of responders to workplace conflict are attackers who cannot keep their feelings to themselves and express their feelings by attacking whatever they can. Attackers are further divided into up-front attackers and behind-the-back attackers. Turner and Weed note that the latter "are difficult to handle because the target person is not sure of the source of any criticism, nor even always sure that there is criticism."[11]

It is possible however, that there may be illegal, unethical, or disobedient behavior happening at the workplace and this may be a case where reporting the behavior may be viewed as gossip. It is then left up to the authority in charge to fully investigate the matter and not simply look past the report and assume it to be workplace gossip.

Informal networks through which communication occurs in an organization are sometimes called the grapevine. In a study done by Harcourt, Richerson, and Wattier, it was found that middle managers in several different organizations believed that gathering information from the grapevine was a much better way of learning information than through formal communication with their subordinates (Harcourt, Richerson & Wattier).

Some see gossip as trivial, hurtful and socially and/or intellectually unproductive.

Some people view gossip as a lighthearted way of spreading information.

A feminist definition of gossip presents it as "a way of talking between women, intimate in style, personal and domestic in scope and setting, a female cultural event which springs from and perpetuates the restrictions of the female role, but also gives the comfort of validation." (Jones, 1990:243)

In Early Modern England the word "gossip" referred to companions in childbirth, not limited to the midwife. It also became a term for women-friends generally, with no necessary derogatory connotations. (OED n. definition 2. a. "A familiar acquaintance, friend, chum", supported by references from 1361 to 1873). It commonly referred to an informal local sorority or social group, who could enforce socially-acceptable behaviour through private censure or through public rituals, such as "rough music", the cucking stool and the skimmington ride.

In Thomas Harman’s Caveat for Common Cursitors 1566 a ‘walking mort’ relates how she was forced to agree to meet a man in his barn, but informed his wife. The wife arrived with her “five furious, sturdy, muffled gossips” who catch the errant husband with “his hosen about his legs” and give him a sound beating. The story clearly functions as a morality tale in which the gossips uphold the social order.[12]

In Sir Herbert Maxwell,Bart's The Chevalier of the Splendid Crest [1900] at the end of chapter 3 the king is noted as referring to his loyal knight "Sir Thomas de Roos" in kindly terms as "my old gossip". Whilst a historical novel of that time the reference implies a continued use of the term "Gossip" as childhood friend as late as 1900.

Judaism considers gossip spoken without a constructive purpose (known in Hebrew as an evil tongue, lashon hara) as a sin. Speaking negatively about people, even if retelling true facts, counts as sinful, as it demeans the dignity of man — both the speaker and the subject of the gossip. According to Proverbs 18:8: "The words of a gossip are like choice morsels: they go down to a man's innermost parts."

Islam considers backbiting the equivalent of eating the flesh of one's dead brother. According to Muslims, backbiting harms its victims without offering them any chance of defense, just as dead people cannot defend against their flesh being eaten. Muslims are expected to treat each other like brothers, deriving from Islam's concept of brotherhood amongst its believers.

The Epistle to the Romans associates gossips ("backbiters") with a list of sins including sexual immorality and with murder:

28: And even as they did not like to retain God in their knowledge, God gave them over to a reprobate mind, to do those things which are not convenient;
29: Being filled with all unrighteousness, fornication, wickedness, covetousness, maliciousness; full of envy, murder, debate, deceit, malignity; whisperers,
30: Backbiters, haters of God, despiteful, proud, boasters, inventors of evil things, disobedient to parents,
31: Without understanding, covenantbreakers, without natural affection, implacable, unmerciful:
32: Who knowing the judgment of God, that they which commit such things are worthy of death, not only do the same, but have pleasure in them that do them. (Romans 1:28-32)

According to Matthew 18, Jesus also taught that conflict resolution among church members ought to begin with the aggrieved party attempting to resolve their dispute with the offending party alone. Only if this did not work would the process escalate to the next step, in which another church member would become involved. After that if the person at fault still would not "hear", the matter was to be fully investigated by the church elders, but not exposed publicly.

In order to gossip, writes Phil Fox Rose, we "must harden our heart towards the 'out' person. We draw a line between ourselves and them; define them as being outside the rules of Christian charity... We create a gap between ourselves and God's Love." As we harden our heart towards more people and groups, he continues, "this negativity and feeling of separateness will grow and permeate our world, and we'll find it more difficult to access God’s love in any aspect of our lives."[13]