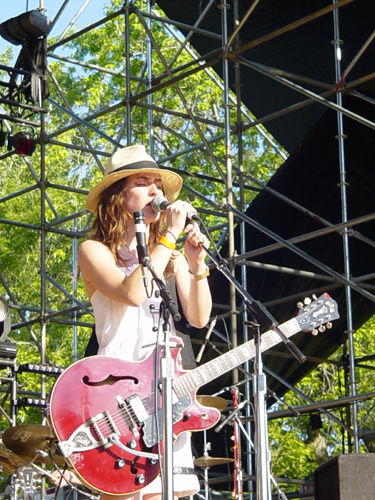 Leslie Feist (born 13 February 1976 in , ) is a Canadian . She performs as a solo artist under the name Feist and as a member of the indie rock group . At the 2008 Juno Awards on 6 April 2008 in , she was the top winner with five awards, including Songwriter, Artist, Pop Album, Album and Single of the Year.

Feist's parents were both artists. Her father, Harold Feist, is an abstract expressionist painter and worked at both the and in Sackville, New Brunswick. Her mother Lyn Feist was a student of s. Their first child, Ben was born (Ben is now a software engineer at Sapient in ) and the family soon moved to Sackville, New Brunswick. Leslie Feist was born on 13 February 1976 in which borders Sackville and at the time, had the closest maternity wing. Her parents divorced soon after, and Leslie, Ben, and their mother moved to , where they lived with her grandparents, and later to . She aspired to be a writer, and spent most of her youth singing in choirs.

In 1991, at age fifteen, Feist got her start in music when she founded, and was the lead vocalist for a Calgary punk band called Placebo (not to be confused with the European band Placebo). She and her bandmates won a local Battle of the Bands competition and were awarded the opening slot at the festival Infest 1993, featuring the Ramones. At this concert she met and , with whom she formed ten years later.

In 1995, Feist was forced to take time off from music to recover from vocal-cord damage. She moved from Calgary to Toronto in 1996. That year she was asked by of to play bass in his solo project . She played the bass guitar in for a year despite never having played bass before. In 1998, she became the rhythm guitarist for the band and toured with them throughout 1998, 1999, and 2000. In 1999, Feist moved in with a friend of a friend, Merrill Nisker, who then began to perform as an electro-punk musician Peaches; Feist worked the back of the stage at Peaches' shows, using a and calling herself "Bitch Lap Lap". [cite news| last =Everett-Green| first =Robert| title =Grammy girl: Feist| pages =R1, R19| publisher =""| date =| url =http://www.theglobeandmail.com/servlet/story/RTGAM.20080208.wgrammy09/BNStory/Entertainment/home| accessdate = ] The two also toured together in England from 2000-2001, staying with of and M.I.A. [cite web | author=Feist|title= "A Torch Singer with an ancient sound"| url=http://www.nytimes.com/2005/06/05/arts/music/05play.html | work = | date= | accessdate=2008-05-14] Feist appeared as a guest vocalist on "". She also met musician Gonzales during this time, and a long-term collaboration formed.

"Monarch (Lay Your Jewelled Head Down)"

Feist's solo début album, "", was released in 1999. Composed of 10 songs, it is a companion to her two recent and better known albums "" and "". The album contains the songs "Monarch" and "That's What I Say, It's Not What I Mean". "Monarch (Lay Your Jewelled Head Down)" was produced by who would later form .

In the summer of 2001, Feist self-produced seven songs at home which she called "The Red Demos", which have never been released commercially. She spent more than two years touring throughout Europe with Gonzales. In that same year she and a group of old friends formed Toronto indie rock group and subsequently recorded "". While on tour in Europe with Gonzales, they began recording new versions of her home recorded "Red Demos", which would later become her major label debut "". "Let It Die" featured both original compositions and covers, and Feist has been noted both as a songwriter and as an innovative interpreter of other artists' songs.

After the recording of "Let It Die", Feist moved to Paris. While in Europe, she collaborated with Norwegian duo as co-writer and guest vocalist on their album "", as well as co-writing and singing as a duet "The Simple Story" with on her album "Rendezvous".

Feist toured during 2004, 2005 and 2006 through North America, Europe, Asia, and Australia supporting "". She won two Canadian s for "Best New Artist" and "Best Alternative Rock Album" in 2004. Sales of "Let It Die" totaled 500,000 internationally, and she was awarded a platinum record in Canada, as well as a gold album in France.

Feist's third solo album, "", was released on 23 April 2007 in Europe, and on 1 May 2007 in Canada, the USA, and the rest of the world. She toured worldwide to promote the album. The album features "1234", a song co-written by 's Sally Seltmann, that became a surprise hit after being featured in a commercial for the , hitting #8 in the US, a rare feat for musicians and even more notable since it hit the Top Ten on the strength of downloads alone. She has been lauded in the press and was featured on the cover of the "New York Times" arts section in June 2007. "" had sold worldwide over 1,000,000 copies and is certified gold in the U.S. The album also won a 2008 Juno Award for "Album of the Year" on 6 April 2008 in .

*In 2006 Feist collaborated with former roommate Peaches on a track entitled "Give 'Er", which appeared on Peaches' album "". Feist contributed backup vocals. Feist also lent her voice to the two tracks "La Même Histoire" and "We're All in the Dance" for the soundtrack to the film "".

*Feist performed on the season premiere of "", that aired on 11 August 2008. She sings a version of “1234” with the lyrics modified to focus on counting, and performs another song accompanied by . [cite news |first=Siri |last=Agrell |title=Will Feist’s famous number be a monster hit with children? |url=http://www.theglobeandmail.com/servlet/story/LAC.20080716.FEIST16//TPStory/Front |work=The Globe and Mail |page=A1 |location=Toronto |date= |accessdate=2008-07-16 ]

*Feist has had her music covered by many artists such as fellow Nova Scotians and , as well as bandmates and former tour mate Bright Eyes. Fellow Canadian appeared in the Feist-directed music video for "One Evening," which was also nominated for Video of the Year at the 2004 Juno Awards.

*Feist in November 2007 performed a duet with Chicago native Brian Rasek (formally lead singer of "Repus") in a charity benefit concert at for AIDS relief in Africa.

*Popular German DJ remixed "My Moon,My Man", which appears on his debut album . The DJ has also been known to close sets with the remix.