Holyoke is a city in Hampden County, Massachusetts, United States, between the western bank of the Connecticut River and the Mount Tom Range of mountains. As of the 2010 Census, the city had a population of 39,880. Sitting only 8 miles north of the major city of Springfield, Massachusetts, Holyoke is considered part of the Springfield Metropolitan Area - one of the two distinct metropolitan areas in the Commonwealth of Massachusetts. The City of Holyoke was named for Elizur Holyoke, a Springfielder who first explored the area in 1664.

Holyoke was one of the first planned industrial communities in the United States. Its rectilinear grid pattern is notable in Western Massachusetts, where few roads are straight. The city's advantageous location on the Connecticut River - the largest river in New England - beside Hadley Falls, the river's steepest drop (60 feet), attracted the Boston Associates, who had successfully developed Lowell, Massachusetts' textile industry.[1] From the late 19th century until the mid-20th century, Holyoke was the world's biggest paper manufacturer.[1] The elaborate Holyoke Canal System, a system of canals built to power paper and textile mills, distinguishes it from other Connecticut River cities. Holyoke is nicknamed The Paper City due to its fame as the world's greatest paper producer.

The sport of volleyball was invented in Holyoke in 1895. The Volleyball Hall of Fame is located there.

A part of Northampton known as Smiths Ferry was separated from the rest of the town by the creation of Easthampton in 1809, and the shortest path to downtown Northampton was on a road near the Connecticut River oxbow, which was subject to frequent flooding. The neighborhood became the northern part of Holyoke in 1909.[3]

Holyoke had few inhabitants until the construction of a dam and the Holyoke Canal System in 1849, and the subsequent construction of water-powered mills, particularly paper mills. At one point over 25 paper mills were in operation in the city, and the population rose from just under 5,000 in 1860 to over 60,000 in 1920. In 1888, Holyoke's paper industry spurred the foundation of the American Pad & Paper Company, which as of 2007[update] is one of the largest suppliers of office products in the world. An early planned industrial town, Holyoke features rectilinear street grid - a novelty in New England. This street hierarchy is seen as a potential economic development tool as it lends well to high-rise buildings, and the surrounding canals could be landscaped into a source of recreation and relaxation.

In the past several years, there have been successful efforts to attract high-tech jobs to Holyoke and diversify its economic base. For example, in 2011, a coalition of universities and tech companies built an energy-efficient, high-performance computing center in Holyoke, supporting the state’s tech sector and academic institutions. These companies and institutions include Cisco Systems, Harvard University, the Massachusetts Institute of Technology (MIT,) the University of Massachusetts, Boston University, EMC Corporation, and Accenture PLC. The data center will be built in Holyoke because the city provides New England's best access to green hydropower.[4] The retail sector has been a major employer in the city since the construction of the Holyoke Mall, one of the largest shopping malls in New England, in 1979. Retail has provided the city with a large and steady tax base, contributing over $7 million dollars in taxes annually.[5] Holyoke is a sister city of Northampton, Massachusetts.

Holyoke Public Library, found at 335 Maple Street, is one of the very few examples of neoclassical architecture in the city of Holyoke. It sits firmly on Library Park, which was donated by the Holyoke Water Power Company in 1887. In 1870 the library was originally located in a room in the old Appleton Street School. In 1876 it moved to a large central room on the main floor of City Hall. It remained there until it was determined that it had outgrown the space and a modern facility was required.[6] Holyoke's citizens were charged to raise money to construct the library building and provide additional books. Under the leadership of Henry Chase, $95,000 was raised. William Whiting and William Skinner, each gave $10,000. Joseph Clough, the architect in charge of designing the building, gave his services gratis because his daughter was a faithful patron of the library. It opened officially in 1902.[7] At the dedication ceremony William Whiting, who was library president at the time, referred to the library as the "people's college", and added that: “A library is as much a part of the intellectual life of a community as its schools, and should be supported generously as part of our educational system. Within these walls you will find authors devoted to literature, arts and science, and they are free to any who will ask. We can say to the citizens of Holyoke you have only to ask her and you will find knowledge to make your life useful and happy”.[8]

On February 9, 1895, William G. Morgan invented volleyball at the former Holyoke YMCA. That YMCA building was located on High Street at the intersection with Appleton Street but has since been demolished. The Volleyball Hall of Fame resides in Holyoke at Heritage State Park and inducts a new class of athletes, coaches, and contributors every October.

Historically, a city of working-class immigrants (and the rich business owners who have employed them,) the first wave of mill workers was predominantly Irish. Holyoke is still home to the second-largest St. Patrick's Day parade in the United States, surpassed only by the New York City parade.[9] Held annually since 1952 on the Sunday following St. Patrick's Day, the parade draws hundreds of thousands of people from across New England and the United States. In the 1850s, mills began to recruit French-Canadians, who were viewed as more docile and less likely to form labor unions.[10] Later waves of immigration and migration led to significant communities of Germans, Poles, Jews, and then, starting in the 1950s, Puerto Ricans, and other Latino groups. Today Latinos form the largest minority group in the city, with the largest percentage-wise Puerto Rican population of any city in the US outside Puerto Rico proper, at 36.5%.[11] The entire Latino population of Holyoke, as of the 2010 census, was 19,313, or 48% of the city's population of 39,880.[12]

The Latino community of Holyoke holds an annual Puerto Rican Day parade on the third weekend of July as part of an Annual Hispanic Family Festival held by La Familia Hispana, inc. Every year the parade grows in popularity, attracting Latinos from across the northeast. 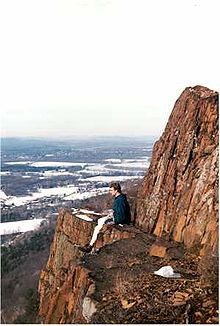 According to the United States Census Bureau, the city has a total area of 22.8 square miles (59 km2), of which, 21.3 square miles (55 km2) of it is land and 1.5 square miles (3.9 km2) of it (6.70%) is water. The city is bordered by Southampton, Westfield, and Easthampton to the west, Northampton to the north, Hadley, South Hadley and Chicopee as river borders to the east, and West Springfield to the south.

Holyoke is the location of East Mountain, the Mount Tom Range, and Mount Tom, 1202 feet (363 m), the highest traprock peak on the Metacomet Ridge, a linear mountain range that extends from Long Island Sound to the Vermont border. Mount Tom is characterized by its high cliffs, sweeping vistas, and microclimate ecosystems. The 110-mile (180 km) Metacomet-Monadnock Trail traverses the Mount Tom Range and East Mountain.

The city of Holyoke has a large Irish and Latino population—both demographics well-known to patronize the Roman Catholic Church. This, and political tradition, contribute to Holyoke being viewed as one of the Pioneer Valley's most conservative cities, along with Westfield, Agawam, and Palmer. Interestingly, the nearby City of Springfield, which also features a large Catholic population, is overwhelmingly liberal, politically and socially.

According to the 2003 FBI Report of Offenses Known to Law Enforcement Holyoke's crime rate in most categories was above the national average, in some categories, significantly. Most of these crimes are placed in the category of property theft, with a property crime count of 2,822.[26]

(B) denotes that the person was born there.