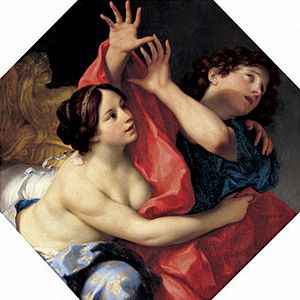 Carlo Cignani (15 May 1628 - 8 September 1719) was an Italian painter of the Bolognese and of the Forlivese school, active in the Baroque period.

He was born to a noble family in Bologna, where he studied first under Battista Cairo and later under Francesco Albani, to whom he remained closely allied, and was his most famous disciple. He was, however, also strongly influenced by the genius of Correggio, and by the masterworks by Melozzo da Forlì. For instance, his masterpiece, the Assumption of the Virgin, around the cupola of the church of the Madonna del Fuoco at Forlì, is inspired by the Correggio's frescoes in the cupola of the Cathedral of Parma and by the Melozzo's perspective from down to up. These frescoes occupied Cignani for some twenty years.

In 1681, Cignani returned to Bologna from Parma. He opened an accademia del nudo for painting from models and had as one of his pupils Giuseppe Maria Crespi.

He had some of the defects of his masters: his elaborate finish and his audacious artificiality in the use of color and in composition mark Albani's influence. Despite that, he imparted to his work more of an intellectual character than his mentors. As a man Cignani was eminently amiable, unassuming and generous.

He accepted no honors offered him by the duke of Parma, but lived and died an artist. In 1686 he moved to Forlì, where he died. When the Accademia Clementina for Bolognese artists was founded in 1706, Cignani was posthumously elected Principe in absencia for life. His most famous pictures, in addition to the Assumption already cited, are the Entry of Paul III into Bologna; the Francis I Touching for Kings Evil; a Power of Love, painted under a fine ceiling by Agostino Carracci, on the walls of a room in the ducal palace at Parma; an Adam and Eve (at The Hague); and two of Joseph and Potiphars Wife (at Dresden and Copenhagen).