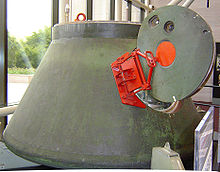 The Vozvraschaemyi Apparat (Russian: Возвращаемый Аппарат, Return Vehicle), or Merkur, GRAU index 11F74, was a Soviet manned spacecraft designed as the reentry capsule for the TKS spacecraft. The name Merkur, assigned to the spacecraft by Western sources, is technically a misnomer; it was never referred to as such by its creator or design engineers and the name never appeared in any soviet documentation.

Its official designation was 11F74. Although the shape of the pressurized portion of the capsule was vaguely like that of the Command Module of Project Apollo the reentry orientation rockets, parachute, and soft landing engines were located on section attached to the top of the capsule. Inside, the VA was completely different from the Apollo CM. Although it also could carry a crew of three, it was designed for occupation only during the launching and landing phases of the missions. Like the American spacecraft, it had a Launch Escape System, a rocket bolted to its nose which was discarded shortly after launch.

Cosmonaut Alexei Leonov called the Almaz Return Capsule "our Apollo," though as a military program, it had no connection to the Soviet manned lunar program.

But in its purpose the VA was more like certain planned military derivatives of the spacecraft of Project Gemini. Like the USAF's Gemini B, planned in the 1960s to carry crew to the Manned Orbiting Laboratory which would be orbited by the same rocket just below the capsule itself, the VA had a small circular hatch in the heat shield.

The VA was to be launched manned attached to the TKS and Almaz Space Station by the Proton rocket and then remain unoccupied until the end of the mission when it would serve as the reentry vehicle.

Although it was never launched as part of the Almaz station, four TKS were launched with VA capsules (one lone flight and three to dockings with space stations: 1 to Salyut 6, 2 to Salyut 7) were launched in the 1980s, although with no crew aboard. The VA capsule on the fourth TKS was modified as a no-reentry laboratory segment.

The VA capsules were also launched in pairs four times. Although one of these flights was aborted due to the carrier rocket failure, the upper capsule was equipped with a Launch Escape System which carried this capsule away from the exploding rocket.

Orbital test of a pair of two VA capsules in 1976-12-15 that started jointly and reentered separately.

Launched at 1977-08-04. Launch vehicle failure on a suborbital test of two VA capsule.