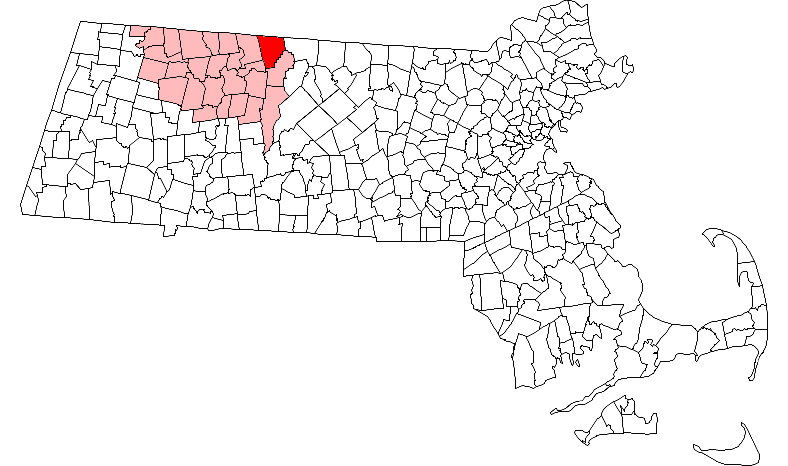 Warwick is a town in Franklin County, , . The population was 750 at the 2000 census. It is part of the Metropolitan Statistical Area.

Warwick was first settled in 1739 and was officially incorporated in 1763.

The land that became Warwick, Massachusetts was one of four tracts of land established by Massachusetts in 1735 to compensate the descendants of the officers and soldiers who served in the "expedition to Canada, in the year 1690." () The area was initially called Gardner's Canada. Initial proprietors were named in 1736. A 1737 owners list (in Blake, below, p. 184) names the initial land owners, few of whom appear to have remained to settle the town once it was incorporated in 1763.

It took another 25 years to attract sufficient numbers of settlers to support a town and its minister. In 1760, such numbers were reached and the town hired a young Reverend Lemuel Hedge. The town was formed officially, as Warwick, on 17 Feb 1763 (Blake, p. 33). Its first officers were James Ball (town clerk); Moses Evans, Jeduthan Morse, James Ball (selectman and assessors); Amzi Doolittle (treasurer); Samuel Ball (constable); James Ball (collector) (Blake, p. 33-34).

As the approached, the town voted unanimously in favor of independence, although the town minister preached against it. Rev. Lemuel Hedge was barred from leaving the town in July 1775 (see Morse, below). He died 15 October 1777, the day British General Burgoyne surrendered his troops to the colonists in Saratoga. In 1776, Lieutenant Thomas Rich was selected to represent the town at the General Assembly of the Massachusetts Bay Colony.

2. History of the Connecticut Valley in Massachusetts, Volume II, by Louis H. Everetts, 1879.

This can be read on-line at the following web site:http://www.franklincountyhistory.com/warwick/everts/index.html

----A major event in Warwick's history was when we hosted the Brotherhood of the Spirit Commune for several years in the 1960s and 1970s. The commune was led by the controversial mystic Michael Metelica Rapunzel. The population of Warwick was only about 450 then, and hundreds of young people came to Warwick to join the commune. There was some friction in the early days, but townspeople and commune members gradually became more cooperative. The commune left Warwick for good in the 1980's.

The Goldsbury family is noted as being a primary contributor to the town's history and settlement. Most Goldsbury's in America today can trace their origin back to this town. Several of the books mentioned here chronicle the lives the Goldsburys who arrived from Ipswich, England.

A landmark in Warwick is . This mountain is located in the center of town and has a network of hiking and cross-country ski trails. Most of the mountain is owned by the state and open to the public. The passes over the summit. At 1,617 feet, the summit is the highest point between and . There's a fire tower at the top, which is accessible by foot. The best access is from Rt. 78 in Warwick. There is a good parking spot at Ohlson Field, just north of the town center. It's about a two hour round trip to the summit.

Warwick is known for Land preservation. The was founded here, and owns a large amount of land with conservation restrictions. Over half the town has protection under one (or more) of the following:State Forest, State Park, Town Forest, Town Common, Privately held Conservation Restrictions, and Agricultural Restrictions.

The town Open Space Committee recently bought, and protected, a piece of ridge line that was going to be a house site.

Warwick has home based businesses, and a few wood shops. There are no stores, gas stations, restaurants, or other commercial businesses. There are farms here that produces grass fed organic dairy products, herbal products, flowers, and vegetables. Another business is logging.

There is a farmer's market on the common on Saturday mornings.

There were 293 households out of which 32.1% had children under the age of 18 living with them, 59.4% were married couples living together, 8.9% had a female householder with no husband present, and 28.0% were non-families. 20.5% of all households were made up of individuals and 5.8% had someone living alone who was 65 years of age or older. The average household size was 2.56 and the average family size was 2.99.