imagesize = 250px
image_caption = The Gay Head cliffs of clay, located on the western-most part of the island.
image_ 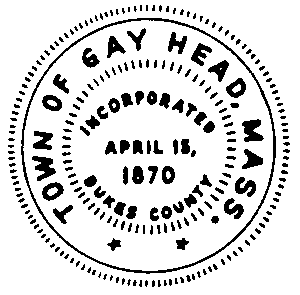 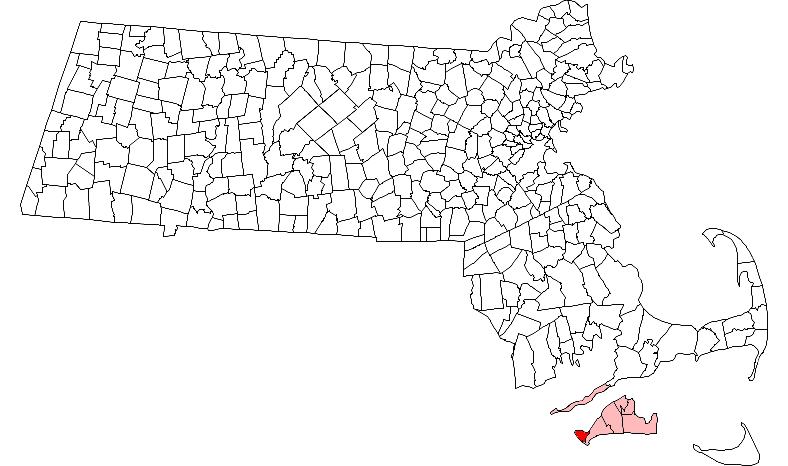 Aquinnah is a town located on the island of in . Prior to 1998 the town was known as Gay Head. The population was 344 at the 2000 U.S. census. It is known for its beautiful clay cliffs and quiet natural serenity, which has become less common in the heavily populated . The clay cliffs/beach are one of the few nude beaches left in the U.S. More recently, it has become celebrated as a center of culture and a center of pride and tradition among members of the tribe, who make up about one-third of the town's voters.

Before the arrival of English colonists, Aquinnah was inhabited by the , a Native American people. First settled by English colonists in 1669, it was officially separated from Chilmark and incorporated in 1870 as Gay Head, . In 1997, by popular vote of 39 to 36, the town changed its name to Aquinnah, which is Wampanoag for "land under the hill." [ [http://nl.newsbank.com/nl-search/we/Archives?p_product=BG&p_theme=bg&p_action=search&p_maxdocs=200&p_topdoc=1&p_text_direct-0=0EADDCA7494773F9&p_field_direct-0=document_id&p_perpage=10&p_sort=YMD_date:D&s_trackval=GooglePM "Boston Globe", May 15, 1997] ]

Throughout its history, the town has been home to a Wampanoag community, which gained federal recognition in 1987 and controls tribal lands in the town.

Aquinnah is separated from the town of Chilmark by Menemsha Bight, Menemsha Pond, and Squibnocket Pond, and the only road into town lies between the ponds. (Squibnocket Beach, which lies between the ocean and Squibnocket Pond, also connects to the town, but is often washed out during storms, and there is no road crossing it.) Squibnocket Point, just east of this beach, is the southernmost point on Martha's Vineyard. Aquinnah has four beaches: Philbin Beach (residents only) and Moshup Beach to the southwest, Long Beach (adjacent to Squibnocket Beach but privately owned), and Lobsterville Beach along the Sound side of town. The Gay Head Cliffs are in a protected area at the western end of town, where the Gay Head lighthouse stands.

There is no direct transit between Aquinnah and the mainland; is in nearby West Tisbury, and the Woods Hole Ferry is in Vineyard Haven, approximately seventeen miles from the town center.

There were 141 households out of which 33.3% had children under the age of 18 living with them, 38.3% were married couples living together, 17.7% had a female householder with no husband present, and 36.9% were non-families. 30.5% of all households were made up of individuals and 7.8% had someone living alone who was 65 years of age or older. The average household size was 2.44 and the average family size was 3.04.

On the state level, Aquinnah is represented in the as a part of the Barnstable, Dukes and Nantucket district, which includes all of Martha's Vineyard and Nantucket, as well as a portion of Falmouth. The town is represented in the as a portion of the Cape and Islands district, which includes all of Martha's Vineyard, Nantucket and most of Barnstable County (with the exception of Bourne, Sandwich, Falmouth and a portion of Barnstable. [ [http://www.mass.gov/legis/citytown.htm Index of Legislative Representatives by City and Town] ] . All of Dukes County is patrolled by the Fifth (Oak Bluffs) Barracks of Troop D of the . [ [http://www.mass.gov/?pageID=eopsterminal&L=5&L0=Home&L1=Law+Enforcement+%26+Criminal+Justice&L2=Law+Enforcement&L3=State+Police+Troops&L4=Troop+D&sid=Eeops&b=terminalcontent&f=msp_divisions_field_services_troops_troop_d_msp_field_troop_d_station_d5&csid=Eeops Station D-5, SP Oak Bluffs] ]

Aquinnah is governed on the local level by the form of government, and is led by an executive secretary and a . The town has its own police and fire departments, near the Town Hall at the town center. The post office is also nearby, as is the Aquinnah Public Library, a one-room library of less than 1,000 square feet. Actually the post office is located 8 miles away in Chillmark.

Aquinnah is served by Martha's Vineyard Public Schools. Chilmark Elementary School and Up-Island Regional School in West Tisbury, serve the town's elementary and middle–school students. , located in Oak Bluffs, serves the entire island's high–school population. MVRHS's teams are nicknamed the Vineyarders, and their colors are purple and white. The school has a longstanding rivalry with High School, and the annual Island Cup between the football teams attracts a strong following.