Christopher Robert "Chris" Evans (born June 13, 1981) is an American actor. He played Cary Baston on the television series Opposite Sex, and transitioned to a film career, starring in several hits, including Not Another Teen Movie (2001), Fierce People (2005), Fantastic Four, sequel Fantastic Four: Rise of the Silver Surfer (2007), and Captain America: The First Avenger (2011).

Chris Evans was born in Boston, Massachusetts[2] and raised in the Boston suburb of Sudbury.[3] His mother, Lisa Marie (née Capuano), is an artistic director at the Concord Youth Theater, and his father, G. Robert "Bob" Evans III, is a dentist.[4][5][6] He is the nephew of U.S. Congressman Mike Capuano, who is his mother's brother.[7][8] He has two sisters, Carly, a graduate of New York University's Tisch School and a high-school drama and English teacher,[4] Shanna, and a younger brother, Scott,[5] who was featured on the ABC soap opera One Life to Live. His mother is of half Italian and half Irish ancestry.[9][10][11] Evans was raised Catholic,[9] and graduated from Lincoln-Sudbury Regional High School.[3]

After filming wrapped on Not Another Teen Movie, Evans landed lead roles in The Perfect Score and Cellular, and then starred in two independent films in Chicago: Dirk Wittenborn's Fierce People, playing the sinister Bryce, and London, playing a strung-out drug user with relationship problems. He then played Johnny Storm, the superhero the Human Torch, in the 2005 comic book adaptation Fantastic Four. Evans reprised the role of the Human Torch in the 2007 sequel Fantastic Four: Rise of the Silver Surfer. That year he also starred as engineer turned astronaut Mace in Danny Boyle's science-fiction film Sunshine.

In 2008, Evans appeared in Street Kings, co-starring Keanu Reeves, and the Tennessee Williams play adaptation The Loss of a Teardrop Diamond, co-starring Bryce Dallas Howard and Ellen Burstyn. The following year he appeared in the science-fiction thriller Push, with Dakota Fanning and Camilla Belle. Evans performed his own fight scenes, which took weeks to film, and was bruised during filming.[12] Also that year, Evans was ranked 474th in Forbes' "Star Currency" rankings, based on films' global box-office performance.[13] 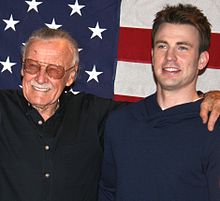 Evans with Stan Lee at the 2011 San Diego Comic-Con

In 2010, he completed filming on co-directors Mark Kassen and Adam Kassen's Puncture in Houston, Texas. The film was selected to debut at the 2011 Tribeca Film Festival as one of the Spotlight projects for the 10th anniversary of the festival.[citation needed] Also that year, Evans appeared in Sylvain White's The Losers, an adaptation of the comic-book series from the DC Comics imprint Vertigo.[14] Evans then appeared in another comic-book adaptation, Edgar Wright's Scott Pilgrim vs. the World, where he portrayed Lucas Lee, one of Ramona Flowers' seven exes.[15] Evans played the Marvel Comics character Captain America in Captain America: The First Avenger, and will reprise the role in the film The Avengers and at least two sequels to Captain America.[16]

With actress Evan Rachel Wood, he is part of the advertising campaign for the perfume Gucci Guilty,[18] and the cologne Guilty pour Homme.[19] Evans is a supporter of gay rights.[20]