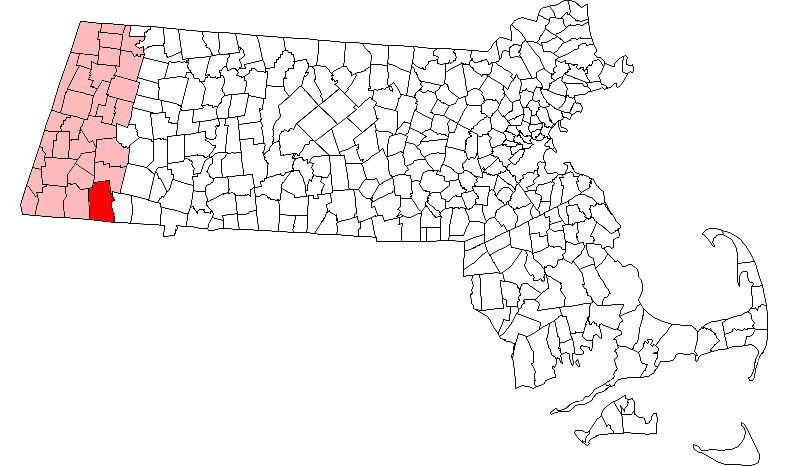 Sandisfield is a town in Berkshire County, , . It is part of the Pittsfield, . The population was 824 at the 2000 census.

Sandisfield was first settled in 1750 as Housatonic Township Number 4, and was officially incorporated in 1762. It was most likely named for the Sandy Family, one of the original families in the town and namesake of the town's Sandy Brook. The town was mostly an agricultural setting in the earliest times, with rye fields and orchards filling the land. Sawmills grew up along the rivers, but most industry failed in the late nineteenth century, when a planned railway along the Farmington River fell through. Today the town is mostly rural, with some of the least densely populated parts of the state. [ [http://www.berkshireweb.com/themap/sandisfield/sandisfield.html The BerkshireWeb - Sandisfield, Massachusetts] ]

According to the , the town has a total area of 53.0 s (137.3 ), of which, 52.3 square miles (135.5 km²) of it is land and 0.7 square miles (1.8 km²) of it (1.34%) is water. The town is the largest by land area in Berkshire County, and eighth largest in the state. Sandisfield lies at the southeast corner of Berkshire County along the Connecticut Border, with Hampden County to the east and Litchfield County, to the south. Sandisfield is bordered by Otis to the north and northeast, Tolland to the east, Colebrook and Norfolk, to the south, New Marlborough to the west, and Monterey to the northwest. Sandisfield lies 28 miles south-southeast of Pittsfield, 32 miles west of Springfield, and 118 miles west-southwest of Boston.

Sandisfield lies in the southeastern part of the , along the western banks of the . The town lies on a plateau, with the Buck and Clam Rivers flowing through town towards the Farmington, as well as several small, marshy brooks and small ponds and lakes. The town is ddotted by pieces of the Sandisfield State Forest, with the highest point in town, Abbey Hill (1,810 ft) lying in the northwest section of the forest. A small portion of Otis State Forest also crosses the northern border of town.

The town lies along Route 8, which passes along the banks of the Farmington River on the eastern part of town. Route 57 crosses through the center of town from west to east, crossing the river into Tolland at the village of New Boston. Additionally, Route 183 cuts through the southwest corner of town, crossing into Connecticut to become . The nearest interstate, (the ) passes north of the town through Otis, with the nearest access being in Lee and Westfield.

There were 327 households out of which 24.8% had children under the age of 18 living with them, 58.4% were married couples living together, 4.0% had a female householder with no husband present, and 34.9% were non-families. 30.0% of all households were made up of individuals and 11.9% had someone living alone who was 65 years of age or older. The average household size was 2.37 and the average family size was 2.99.

Sandisfield employs the form of government, and is led by a . The town has its own small police station, as well as a post office and two volunteer fire stations (in New Boston and west of the town center). The town's library is connected to the regional library systems. The nearest hospitals are in Great Barrington and Westfield.

On the state level, Sandisfield is represented in the by the Fourth Berkshire district, which covers southern Berkshire County, as well as the westernmost towns in Hampden County. In the , the town is represented by the Berkshire, Hampshire and Franklin district, which includes all of Berkshire County and western Hampshire and Franklin Counties. [ [http://www.mass.gov/legis/citytown.htm Senators and Representatives by City and Town] ] The town is patrolled by the First (Lee) Station of Barracks "B" of the . [ [http://www.mass.gov/?pageID=eopsterminal&L=5&L0=Home&L1=Law+Enforcement+%26+Criminal+Justice&L2=Law+Enforcement&L3=State+Police+Troops&L4=Troop+B&sid=Eeops&b=terminalcontent&f=msp_divisions_field_services_troops_troop_b_msp_field_troop_b_station_b1&csid=Eeops Station B-1, SP Lee] ]

Sandisfield, along with neighboring Otis, is part of the Farmington River Regional School District. Until recently, the town ran its own school, but budget cuts closed it. The district's only school, Farmington River Elementary School, is in Otis, and houses students from pre-kindergarten through sixth grades. For the upper grades, most students attend Monument Valley Regional Middle School and Monument Mountain Regional High School in Great Barrington, with some attending Lenox schools. The nearest private schools are in Great Barrington and Westfield.