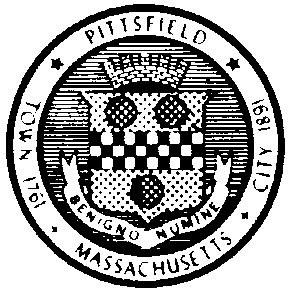 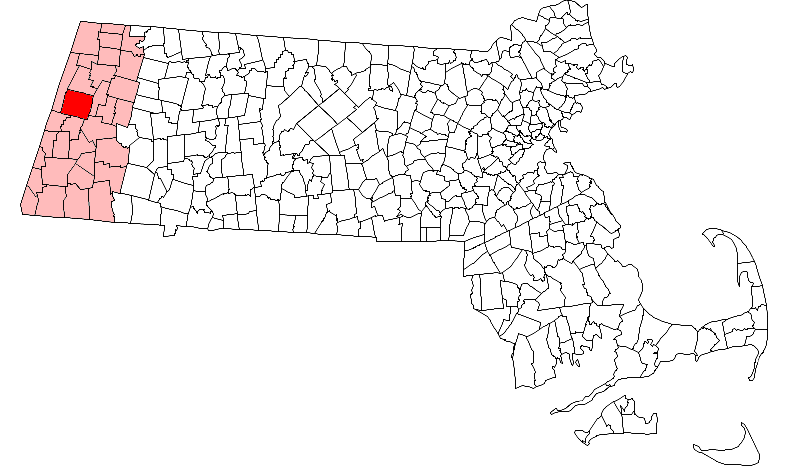 Pittsfield was first settled in 1752 and was officially incorporated in 1761. Royal Governor, Sir named Pittsfield after British and .

A group of young men came and began to clear the land in 1743, but threats of Indian raids associated with the conflict of the soon forced them to leave, and the land remained unoccupied by whites for several more years. Finally in 1752, settlers, many from , arrived and a village began to grow, which was incorporated as Pontoosuck Plantation in 1753. By 1761 there were 200 residents and the plantation became the Township of Pittsfield.

By the end of the revolutionary war, Pittsfield had expanded to nearly 2,000 residents. While primarily an agricultural area, because of the many brooks that flowed into the Housatonic River, the landscape was dotted with mills that produced lumber, grist, paper and textiles. With the introduction of Merino sheep from Spain in 1807, the area became the center of woolen manufacturing in the United States, an industry that would dominate the community’s employment opportunities for almost a century.

The town was a bustling metropolis by the late 19th century. In 1891, the City of Pittsfield was incorporated, and William Stanley, who had recently relocated his Electric Manufacturing Company to Pittsfield from Great Barrington, produced the first electric transformer. Stanley’s enterprise was the forerunner of the internationally known corporate giant, . Thanks to the success of GE, Pittsfield’s population in 1930 had grown to more than 50,000. While GE Advanced Materials (now owned by -Innovative Plastics) continues to be one of the City’s largest employers, a workforce that once topped 13,000 was reduced to less than 700 with the demise and/or relocation of the transformer and aerospace portions of the General Electric empire.

On , at 10:15 AM, during a two-week tour through campaigning for Republican congressmen, the transporting President from downtown Pittsfield to the Pittsfield Country Club collided head-on with a trolley. Roosevelt, Massachusetts Governor , secretary to the president , and William Craig were thrown into the street. Craig was killed; he was the first Secret Service agent killed while on a presidential protection detail. Roosevelt, whose face and left shin were badly bruised, nearly came to blows with the trolley engineer, Euclid Madden. Madden was later charged with , to which he pleaded y. He was sentenced to six months in jail and a heavy fine.

In 2004, historian John Thorn discovered a reference to a 1791 by-law prohibiting anyone from playing "baseball" within convert|80|yd of the new meeting house in Pittsfield, Massachusetts. A librarian found the actual by-law in the Berkshire Athenaeum library, and its age was verified by researchers at the Williamstown Art Conservation Center. If authentic and if actually referring to a recognizable version of the modern game, the 1791 document, would be, as of 2004, the earliest known reference to the game in America. See, . The city has "reprinted" the by-Law with auxiliary documents. [ [http://www.pittsfield-ma.org/subpage.asp?ID=226 City Of Pittsfield: Baseball ] ]

The so-called Broken Window By-Law is the earliest known reference to "baseball" in North America. A finding that was invented in 1839 by in Cooperstown provided the rationale for baseball centennial celebrations in 1939, including the opening of a National and Museum in that city. But few historians ever believed it and even the Hall's vice president, Jeff Idelson, has stated that "Baseball wasn't really born anywhere."

Professional was played in Pittsfield's from 1919 through 2003. From 1989 to 2001, the Pittsfield Mets and Pittsfield Astros (2001 only) represented the city in the . The Astros have since moved to and are now known as the .

Since 2005, Wahconah Park has been the home stadium of the , a summer collegiate amateur team of the owned by , former general manager. The Dukes have attracted consistently larger crowds to Wahconah Park each summer.

Ulysses Frank Grant, born August 1, 1865 in Pittsfield, MA (died May 27, 1937), was an African American baseball player in the 19th century, who played in the International League and for various independent teams. He is widely considered to have been the greatest African-American player of the 19th century.

Arienti, Stephen 'Nails McGee,' born July 4, 1880, died December 24, 1945. A Major League Baseball player. He made his major league debut for the Brooklyn Superbas on May 15, 1900, and hit a home run in his first at bat. Nails McGee was known for his temper, and developed a reputation as being one of baseball's first hot heads. This resulted in his being hit with several bean balls, ultimately leading to a career ending concussion. Arienti died in his hometown of Pittsfield Mass, in 1945, and is buried in St. Joseph's cemetery.

, Golden Glove shortstop for the Baltimore Orioles, Turk Wendell, relief pitcher for the New York Mets, and , Outfielder for the Texas Rangers were all from Pittsfield.

The year 1999 was a milestone for Pittsfield, when negotiations between EPA, the state, General Electric and the City resulted in a landmark settlement &ndash; valued at over $250 million &ndash; to clean up Pittsfield and the Housatonic River. The settlement was memorialized in a Consent Decree that was entered in federal court the following year, making it a binding legal agreement.Fact|date=August 2008 In the years since the settlement was reached, the EPA, state agencies, the City and GE have undertaken one of the largest and most complex cleanups in the country, while meeting the underlying objectives of the settlement: remediation, revitalization, and restoration. Examples of success are in plain view, most notably along the ancient Housatonic River as it winds through Pittsfield.Fact|date=August 2008 Clean up work is complete on the first previously PCB-laden ½ mile of the Housatonic River, adjacent to the GE facility.Fact|date=August 2008 Exceptional progress has been made on the 1 ½ Mile Reach between Lyman Street and Fred Garner Park.Fact|date=August 2008 The EPA has overcome significant engineering hurdles, allowing this $90 million portion of the EPA clean up to be ahead of schedule and likely completed in late 2006.Fact|date=August 2008 GE has also removed contaminated soil and restored 27 residential properties abutting the river. To date, more than convert|115000|cuyd|m3 of PCB-contaminated sediment, bank, and floodplain soil have been removed from the river and from people's yards.Fact|date=August 2008

Most of the population occupies roughly one quarter of the city's land. Pittsfield lies at the fork of the east and west branches of the , which heads southward from the city towards . The eastern branch leads down from the hills, while the western branch is fed from Onota Lake and (which is on the Lanesborough town line). Like much of western Berkshire County, the city lies between the Berkshire Hills to the east, and the to the west. To the west of the city also lies Pittsfield State Forest, a 65 acre park with hiking and cross-country skiing trails, camping, picnic areas, and a swimming beach. Sections of the Housatonic Valley Wildlife Management Area also dot the banks of the river.

Pittsfield is located at the crossroads of and which join together in the city. Route 8 passes through the northeast corner of town, with a portion of it combined with Route 9, the central east-west road through the western part of the state, whose western terminus is in the city at Route 7. Route 41 also begins in the southwest corner of town, heading south from Route 20. The nearest interstate, (the ) is located about convert|10|mi|km south in Lee.

Long-distance ground transportation in Pittsfield is based at the which serves as the station for trains and Peter Pan buses. The [http://www.berkshirerta.com Berkshire Regional Transit Authority] (BRTA), the transit provider for Pittsfield and vicinity, is based at the Intermodal Center and also uses it as a hub for most of its lines. Rail freight transportation is provided by and the .

The FBO located at offers access to the region via private and chartered aircraft ranging from single engine piston to multi-engine jet. They also offer scenic rides and flight training. The nearest airport with national service is .

Pittsfield employs the form of government. Their current mayor is James M. Ruberto, who was elected in 2003. The city is fully functioning, with all the major public services, including Berkshire Medical Center and the region's only VA medical clinic. The city's library, the , is one of the largest in western Massachusetts, and is connected to the regional library system. Pittsfield is also the of Berkshire County, and as such has many state facilities for the county.

On the state level, Pittsfield has three representatives to the : the Second Berkshire, which serves most of central Berkshire County as well as portions of Hampshire County and Franklin County; the Third Berkshire, which covers most of the city proper; and the Fourth Berkshire, which covers southern Berkshire County as well as Chester, Blandford and Tolland in Hampden County. In the , the city is represented by the Berkshire, Hampshire and Franklin district, which includes all of Berkshire County and western Hampshire and Franklin Counties. [ [http://www.mass.gov/legis/citytown.htm Senators and Representatives by City and Town] ] The city is patrolled by the Fourth (Cheshire) Station of Barracks "B" of the . [ [http://www.mass.gov/?pageID=eopsterminal&L=5&L0=Home&L1=Law+Enforcement+%26+Criminal+Justice&L2=Law+Enforcement&L3=State+Police+Troops&L4=Troop+B&sid=Eeops&b=terminalcontent&f=msp_divisions_field_services_troops_troop_b_msp_field_troop_b_station_b4&csid=Eeops Station B-4, SP Cheshire] ]

Pittsfield is the geographic and commercial hub of the culturally-rich Berkshires -- home countless world-renowned institutions like Tanglewood, the summer home of the Boston Symphony Orchestra.

Downtown Pittsfield is home to The , Barrington Stage Company, , and . In recent years, the city has undergone a transformation downtown with significant investment in the downtown, including new restaurants, condominium and other residential developments and cultural attractions. The community invested more than $22 million to refurbish the 100-year old Colonial Theatre, one of the only theaters of its kind from the Vaudeville age and has been described as the "one of the finest acoustical theaters in the world."

Barrington Stage Company, the Tony Award-winning producer of "25th Annual Putnam County Spelling Bee" invested millions into its newly-renovated stage in downtown Pittsfield, along with the development of other stages within the downtown for smaller performances. Barrington Stage's renowned head of its Musical Theatre Lab, William Finn, told the Boston Globe that he is determined to make Pittsfield the "epicenter of the musical theater universe."

The Berkshire Museum, the oldest and most diverse museum in the Berkshires, recently underwent a multi-million dollar renovation that incorporated a state-of-the-art air control system that will allow it to attract world-class exhibits, which will make the institution an even greater draw.

Many of the Berkshires' oldest homes, dating to the mid-18th century, can be found in Pittsfield, as well as historic neighborhoods dating from the late 19th and early 20th centuries.Fact|date=December 2007

Several small multi-generational farms can still be found in Pittsfield, though suburban sprawl and land development have recently claimed some of this land.

Pittsfield has several country clubs, including the Pontoosuc Lake Country Club. Pittsfield is also home to the Berkshire Rowing and Sculling Society, located on Onota Lake.

Pittsfield is located in the Albany television market and is the for two stations in that market, affiliate , and a low power TV station, W28DA, which rebroadcasts WNYT on channel 28 from a location on South Mountain in the city. Springfield stations also serve the market with three (-, -LP-, -) on cable. has never been carried on the cable system in Pittsfield, but is viewable in some sections.. Also carried on cable, but not necessarily serving Pittsfield, is Boston's (ABC).

Pittsfield Community Television is a not-for-profit, 501 (c)(3) organization and a member of the Alliance for Community Media. Programming on PCTV is available 24 hours per day, year-long, and is available online at www.pittsfieldtv.org.

One of Pittsfield's oldest radio stations, WBEC-FM 105.5 was sold and relocated to in , Massachusetts, where it became a radio station (Technically licensed to Easthampton).It relays of . The move changed over two decades of programming on the Pittsfield dial which moved WBEC-FM as a TOP40 station on 105.5 down to 95.9, WUPE (as oldies) up to 100.1 in North Adams, replacing the Beautiful/EZ format on 100.1 known as WMNB. Recently WBEC 95.9 changed from a HOT AC to an Adult Contemporary format, which was on 95.9 prior to the changes, as "Lite 95.9 WUPE", a mostly satellite driven format.

*Thomas Allen, railroad builder and member of the