imagesize =
image_caption = The Round Boarn at Hancock Shaker Village
image_ 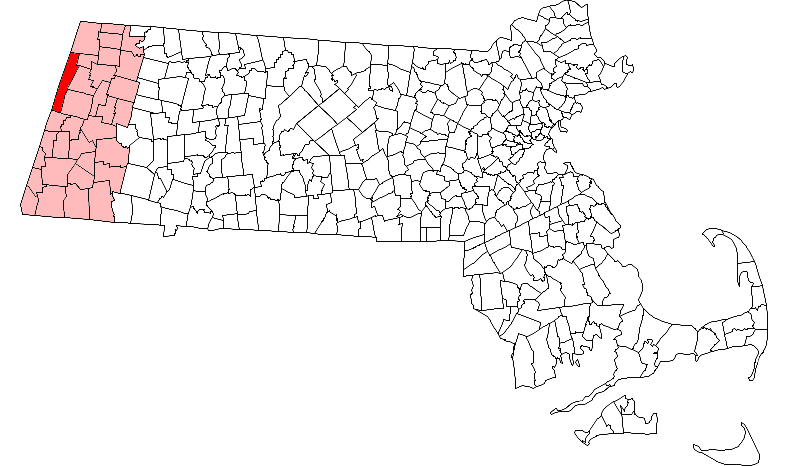 Hancock was first settled in 1762 as the Plantation of Jericho. The town was officially incorporated in 1776, and renamed for .

In 1790, the established "Hancock Shaker Village". The Shakers were a order which believed in , and living. could take the form of and ecstatic , which is why they were called the "Shaking Quakers," or "Shakers." The is renowned today for its plain and .

After reaching peak membership in the 1840s, with 19 "societies" scattered from to , and west to , the Shaker movement gradually dwindled. Today, only one village remains in the control of the last Shakers, located at "Sabbathday Lake Shaker Village" in New Gloucester, . "Hancock Shaker Village", now operated as a museum, is famous for its "Round Stone Barn," built in 1826.

Hancock is bordered on the north by Williamstown, on the northeast by New Ashford, on the east by Lanesborough and Pittsfield, on the south by Richmond, on the west by Canaan, New Lebanon, Stephentown and Berlin, .

Most of northern Hancock is bound by the , between which the valley of the west branch of the Green River begins and continues northward, and the Kinderhook Creek valley begins and flows southwest into New York. To the west, along the New York border, stands the western escarpment of the Taconic Mountains including Misery Mountain and , while northeastern town line is bordered by the eastern Taconic escarpment peaks of Brodie Mountain, Sheeps Heaven Mountain, and Jiminy Peak (home to a ski area of the same name). Southern Hancock, where the Shaker Village is located, is dominated by the Taconic peaks of , including Tower Mountain, Smith Mountain, Berry Hill, Honwee Mountain, Doll Mountain, and Shaker Mountain.

passes through the southern end of town, from Pittsfield to the New York state line. Route 43 also passes through town, from the northern border with Williamstown, and is the main route through town, turning along Kinderhook Creek and into New York. There are no roads within the town that connect the two roads, however.

There is no rail, bus or air service within the town. The nearest services are in Pittsfield to the south, and Williamstown and North Adams to the north. The nearest airport with nationally connecting flights is , approximately forty miles northwest of town.

There were 296 households out of which 29.7% had children under the age of 18 living with them, 62.2% were married couples living together, 5.4% had a female householder with no husband present, and 29.1% were non-families. 23.3% of all households were made up of individuals and 7.4% had someone living alone who was 65 years of age or older. The average household size was 2.41 and the average family size was 2.84.

On the state level, Hancock is represented in the by the Second Berkshire district, which covers central Berkshire County, as well as portions of Hampshire and Franklin Counties. In the , the town is represented by the Berkshire, Hampshire and Franklin district, which includes all of Berkshire County and western Hampshire and Franklin Counties. [ [http://www.mass.gov/legis/citytown.htm Senators and Representatives by City and Town] ] The town is patrolled by the Fourth (Cheshire) Station of Troop "B" of the . [ [http://www.mass.gov/?pageID=eopsterminal&L=5&L0=Home&L1=Law+Enforcement+%26+Criminal+Justice&L2=Law+Enforcement&L3=State+Police+Troops&L4=Troop+B&sid=Eeops&b=terminalcontent&f=msp_divisions_field_services_troops_troop_b_msp_field_troop_b_station_b4&csid=Eeops Station B-4, SP Cheshire] ]