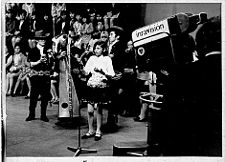 Television live broadcast in Inravisión studios during the mid 1960s (Bogotá), where the first Colombian television shows were produced

Television in Colombia or Colombian television (Spanish: Televisión de Colombia) is a media of Colombia. It is characterized for broadcasting telenovelas, series, game shows and TV news. Until 1998 it was a state monopoly (though there was a short-lived local private channel in the 1960s). There are two privately owned TV networks and three state-owned TV networks with national coverage, as well as six regional TV networks and dozens of local TV stations. There are numerous cable TV companies operating in Colombia under each Colombian department statutes. These cable companies also develop their own channels, in addition to a variety of international channels. Television in Colombia has always relied on technological advancements from developed countries importing almost all the equipment.

Television in Colombia was inaugurated on 13 June 1954 during the government of General Gustavo Rojas Pinilla, who became impressed with the new invention during a visit to Nazi Germany as a military attaché. Rojas imported the Siemens and Dumont equipment[2] and hired Cuban technicians to set up a TV station on time for the commemoration of Rojas's first year in office. A test broadcast was made 1 May 1954 covering Bogotá and Manizales.[2]

Initially television in Colombia was public, with emphasis on education and cultural topics until the government developed a system of concessions, in which the State was in charge of the television infrastructure and gave programming slots in the channels for private companies known as programadoras, similar to the syndication system that is still used in the United States: networks and TV channels broadcast TV programs that were not produced by them. In 1963 Inravisión, the public broadcaster, was created. Before that, it was in charge by the Televisora Nacional, part of the Radiodifusora Nacional de Colombia. In 1969 the government then tried to privatize the sector with Teletigre, a local channel for Bogotá, but the channel did not last long after financial problems. Teletigre would return to state hands and become Tele 9 Corazón and, in 1972 Segunda Cadena, with national coverage.

On 11 December 1979, regular color television broadcasts started in Colombia[3] using the NTSC standard. Colour television had already been introduced in October 1973, when programadora Cenpro TV made a colour broadcast during an education seminar with Japanese-made equipment. The inauguration and the first match of the 1974 FIFA World Cup were broadcast live in colour, but they could be seen in colour only in big screens in Bogotá and Cali[4].

In the 1970s and 1980s, the Colombian national television had three national networks: Cadena Uno, Cadena Dos and Cadena Tres. The first two worked under the concessions system while the Cadena Tres (later renamed to Señal Colombia) remained under complete government control and focused on cultural and educational programming.

During the early 1980s a regional TV network set up illegally in Valledupar went to become Telecaribe and moved to Barranquilla. Another regional networks for other regions of Colombia, such as Teleantioquia and Telepacífico were created, by the then Minister of Communications Noemí Sanín. In the 1990s Teveandina, Telecafé, and Teleislas would be created.

The 1991 bid (for the 1992-1998 period) triggered competitiveness as a previous step for privatization. Cadena Dos became Canal A, and the programming companies, 24 at the time, received from this point slots in one channel to compete among each other for ratings. Cadena Uno would be rebranded Canal Uno in January 1998.

The Colombian Constitution of 1991 created the National Television Commission (CNTV), an autonomous entity in charge of policies for public television and regulation of television contents. The CNTV started working in 1995.

In 1998, the government gave away licences to set up privately owned television networks. These licences were granted to Cadena radial colombiana (Caracol TV) and Radio Cadena Nacional (RCN TV), which had started as radio networks and were in the hands of the main economic groups of Colombia. Both private stations began functioning as TV networks on 10 July 1998.

The recession of the Colombian economy during the late 1990s weakened the state-run networks and in early 2004 the only production company in the Canal A was transferred to Canal Uno. The production companies or programadoras had continued working independently as programmers for the same channel and never grouped to establish a better programming against the newly organized privately owned networks. Canal A then was turned into the Canal Institucional and became under total control of the government. Late 2004, Inravisión would be liquidated and Radio Televisión Nacional de Colombia was created.

In 2009 a licence for a third national private television network will be granted by the Colombian government. Spanish groups PRISA and Planeta, and Venezuelan tycoon Gustavo Cisneros are bidding, each of them allied with Colombian shareholders, for the licence.

Señal Colombia —Colombia's state-owned channel— has made digital terrestrial television broadcast tests since 2006, in northwest Bogotá and downtown Cartagena, transmitting into the three DTV formats (ATSC, DVB-T, and ISDB-T). Also the Chinese standard DMB-T/H, was considered, but couldn't be tested.

HDTV-ready television sets (DVB-T) have been available in Colombia since 2003, but as of December 2010 cable companies have not broadcast HD content to their subscribers. Satellite television DirecTV Colombia offer HD channels.