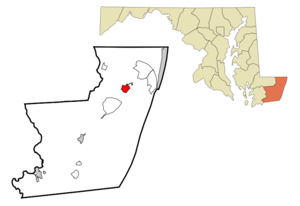 The town of Berlin had its start around the 1790s, part of the Burley Plantation, a convert|300|acre|km2|sing=on land grant dating back to 1677. The name Berlin is believed to be derived from a contraction of "Burleigh Inn", a tavern located at the crossroads of the Philadelphia Post Road (now South Main Street) and Sinepuxent Road (Tripoli Street). This may be why the traditional pronunciation of the town's name is BURL-un, as opposed to the more modern pronunciations BER-LIN and ber-LIN. The traditional pronunciation is rarely heard today. Fact|date=February 2007

Berlin incorporated as a town in 1868. In the early 20th century, Berlin was known as a rest stop for travelers on their way to the coastal resort of Ocean City as well as a stop for tourists who enjoyed hunting and fishing on the lower of Maryland.

Since the late 1980s the town has undergone considerable revitalization of its historic downtown commercial district and adjacent residential areas. Berlin's historic residential areas feature nearly two centuries of architectural heritage from the from three distinct periods: Federal, Victorian, and 20th Century. 47 of these structures have been noted in the as well as the historic commercial district. Berlin has also been designated as a "Main Street Community" by the State of Maryland in recognition of its revitalization progress.

There were 1,347 households out of which 34.1% had children under the age of 18 living with them, 40.2% were married couples living together, 21.0% had a female householder with no husband present, and 34.6% were non-families. 29.7% of all households were made up of individuals and 18.3% had someone living alone who was 65 years of age or older. The average household size was 2.46 and the average family size was 3.01.

The "Worcester Preparatory School" is a pre-school to Grade 12 , located on South Main Street, that educates over 600 students.