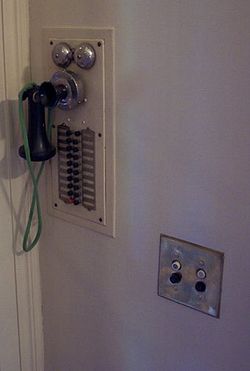 Intercom system in the Pittock Mansion

An intercom (intercommunication device), talkback or doorphone is a stand-alone voice communications system for use within a building or small collection of buildings, functioning independently of the public telephone network. Intercoms are generally mounted permanently in buildings and vehicles. Intercoms can incorporate connections to public address loudspeaker systems, walkie talkies, telephones, and to other intercom systems. Some intercom systems incorporate control of devices such as signal lights and door latches.

Many schools and office buildings now use audio / video systems to identify visitors trying to gain access to a locked building, and can be interfaced with the building's access control system.

Intercom systems can be found on many types of vehicles including trains, watercraft, aircraft and armoured fighting vehicles.

Portable intercoms are commonly used by special event production crews and professional sports teams. Performing arts venues such as theaters and concert halls often have a combination of permanently mounted and portable intercom elements. Motorsports race tracks often have both portable and permanent intercom stations mounted at critical points around the racecourse for use by race officials and emergency medical technicians. 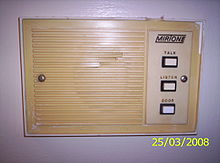 While every intercom product line is different, most analogue intercom systems have much in common. Voice signals of about a volt or two are carried atop a direct current power rail of 12, 30 or 48 volts which uses a pair of conductors. Signal light indications between stations can be accomplished through the use of additional conductors or can be carried on the main voice pair via tone frequencies sent above or below the speech frequency range. Multiple channels of simultaneous conversations can be carried over additional conductors within a cable or by frequency- or time-division multiplexing in the analogue domain. Multiple channels can easily be carried by packet-switched digital intercom signals.

Digital intercoms use Category 5 cable and relay information back and forth in data packets using the Internet protocol architecture.

Intercom systems are widely used in TV stations and outside broadcast vehicles such as those seen at sporting events or entertainment venues.[1] There are essentially two different types of intercoms used in the television world: two-wire party line or four-wire matrix systems. In the beginning, TV stations would simply build their own communication systems using old phone equipment. However, today there are several manufacturers offering off-the-shelf systems. From the late 1970s until the mid-90s the two-wire party line type systems were the most popular, primarily due to the technology that was available at the time. The two channel variety used a 32 Volt impedance generating central power supply to drive external stations or belt packs. This type of format allowed the two channels to operate in standard microphone cable, a feature highly desired by the broadcasters. These systems were very robust and simple to design, maintain and operate but had limited capacity and flexibility as they were usually hardwired. A typical user on the system could not choose who to talk to. He would communicate with the same person or group of people until the system was manually reconfigured to allow communication with a different group of people. Two-wire routers or source assignment panels were then implemented to allow quick re-routing. This reconfiguration was usually handled at a central location, but because voltage is used on the circuit to power the external user stations as well as communicate, there would usually be a pop when the channels were switched. So while one could change the system on-the-fly, it was usually not desirable to do so in the middle of a production, as the popping noise would distract to the rest of the television crew.

In the mid-90s four-wire technology started gaining more prominence due to the technology getting cheaper and smaller. Four-wire circuit technology had been around for quite some time but was very expensive to implement. It usually required a large footprint in the physical television studio, thus was only used at very large television stations or television networks.

For installations where it is not desirable or possible to run wires to support an intercom system, wireless intercom systems are available. There are two major benefits of a wireless intercom system over the traditional wired intercom. The first is that installation is much easier since no wires have to be run between intercom units. The second is that you can easily move the units at any time. With that convenience and ease of installation comes a risk of interference from other wireless and electrical devices. Nearby wireless devices such as cordless telephones, wireless data networks, and remote audio speakers, as well as structural features in your building, can all interfere. Electrical devices such as motors, lighting fixtures and transformers can cause noise. There may be concerns about privacy since conversations may be picked up on a scanner, baby monitor, cordless phone, or a similar device on the same frequency. Encrypted wireless intercoms can reduce or eliminate privacy risks, while placement, installation, construction, grounding and shielding methods can reduce or eliminate the detrimental effects of external interference. The United States and Canada have several frequency ranges for wireless intercom systems and other wireless products. They are 49 MHz, FM band (200KH – 270 kHz), 494–608 MHz, 900 MHz, 2.4 GHz, 5.8 GHz, and MURS (150 MHz).

Power line communication units that send signal over house wiring have been referred to as "wireless" intercoms. Though they are technically wired intercoms, they are based on existing wiring and thus require no additional wires.[2] 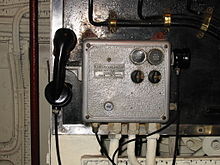 Loudaphone brand intercom station aboard RMS Queen Mary. The Loudaphone was specified for noisy environments such as aboard trains and trams and within a ship's engine room

Some telephones include intercom functions that enable paging and conversation between instruments of similar make and model. Examples include Panasonic model KX-TS3282W(/B), AT&T models 945 and 974, and TMC model ET4300.

A single device can add intercom functionality to multiple standard telephones on a common phone line, even of different makes and models. Installation effort is minimal, and is not vulnerable to the radio interference and security issues of wireless systems. The Add-A-Com Whole House Intercom for Standard Telephone Systems is such a device. Intercom paging is accomplished by sounding a distinctive ring from all telephones after any phone is taken briefly off hook. After paging, any number of phones may converse. The device temporarily disconnects the external phone line during intercom use, and reconnects when all phones are again on hook. During intercom use, an external call’s ringing signal can be heard in the earpiece.