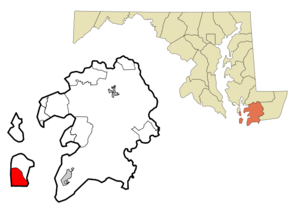 Smith Island is a (CDP) in Somerset County, , . It is included in the Metropolitan Statistical Area. Smith Island is Maryland's only inhabited off-shore island in the , and its population was 364 at the 2000 census.

In the last 150 years, Smith Island has lost over convert|3300|acre|km2|0 of wetlands due to into the . To prevent the island from being lost to erosion, restoration efforts will be ongoing for the next 50 years to restore convert|1900|acre|km2|0 of and convert|240|acre|km2|1 of wetlands. [ [http://www.nab.usace.army.mil/projects/Maryland/smithisland.htm US Army Corps of Engineers] Smith Island, Maryland Environmental Restoration and Protection Project Accessed October 11 2007]

People traveling to Smith Island can only access it by boat. Passenger-only ferries connect Smith Island to , to the west, and , to the east. Tourists arriving by ferry can sleep in a guest house and enjoy seafood meals. Visitors are also charmed by the islanders' hardy fishing livelihood and devotion to the church. One visitor, the author , described his conversations with islanders in his best-selling book .

There were 167 households out of which 19.2% had children under the age of 18 living with them, 60.5% were married couples living together, 4.2% had a female householder with no husband present, and 32.9% were non-families. 29.3% of all households were made up of individuals and 16.8% had someone living alone who was 65 years of age or older. The average household size was 2.18 and the average family size was 2.69.

British settlers arrive on the island in the 1600s, arriving from Cornwall and Wales via Virginia. [ [http://www.telegraph.co.uk/travel/733588/Claws-and-effect.html Claws and effect - Telegraph ] ]

Smith Island has its own region-specific traditional . The most famous dish is a locally produced cake featuring 8 to 15 thin layers [Adventure Guide to the Chesapeake Bay by Barbara Radcliffe Rogers, Stillman Rogers page 435 Hunter Publishing, Inc, 2001 ISBN 1556508891] filled with creme, frosting and/or crushed candy bars. The cake is iced with a cooked chocolate icing. The cake is often made using a commercial cake mix but with unique additions such as . It can also be made from scratch using flour. [ [http://www.smithisland.org/cakerecipe.html Crisfield & Smith Island Cultural Alliance, Inc.] Smith island Cake] The most common flavor is yellow cake with chocolate icing but other flavors such as coconut, fig, strawberry. lemon and orange are also common. Known simply as the Smith Island Cake, the dessert is baked for any occasion and not reserved only for holidays. [ [http://www.marylandtraditions.org/smith.htm SMITH ISLAND LAYER CAKE] from Maryland Traditions] The cake is also baked as the feature prize for a local fundraising tradition called a "Cake Walk" which is a game played like musical chairs where donated cakes serve as the prize. Great attention is paid to the perfection of the layers and form of the cake. Before each round, the prize cake at stake is cut in half and shown to the players who pay to participate in the game. A poorly stacked cake may not attract many players and as a result, not raise as much money as a more perfectly executed cake. [An Island Out of Time: A Memoir of Smith Island in the Chesapeake by Tom Horton, Page 10 W. W. Norton & Company, 1996 ISBN 0393039382]