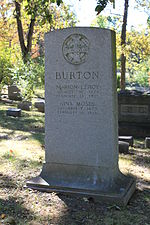 In that year, he became fifth president of the University of Michigan. He was the youngest man to hold the presidency at The University Of Michigan. He oversaw the construction of buildings on campus, earning Him the nickname "Burton the builder." Burton served until his death at age 50 from angina in February, 1925, following a heart attack in the fall of 1924.

While, the president of the University of Michigan he invited Robert Frost to be a Poet-in-Residence.

He was also a Congregational preacher in New York City.

Burton made the 1924 nominating speech for Calvin Coolidge for president at the National Republican Convention.