Ocean Girl (titled Ocean Odyssey in the UK) is an Australian science fiction TV series aimed for family audiences and starring Marzena Godecki as the lead character. The show is set in the near future, and focuses on an unusual girl named Neri who lives alone on an island, and the friendships she develops with the inhabitants of an underwater research facility called ORCA (Oceanic Research Centre of Australia). The show is an example of deep ecology science fiction.

Ocean Girl inspired an animated series, The New Adventures of Ocean Girl, which ran from 2000 to 2001, and has since been released on DVD. The animated series is unrelated to the original live-action show.

Neri — the title character — is a young girl with an affinity for water, super-human strength, the ability to swim long distances, and super-human lung capacity. She lives alone on an otherwise deserted island. Early in the first season, Neri befriends two Australian boys: Jason and Brett Bates. This friendship is at first a highly-guarded secret due to Neri's fear of other humans. The Bates brothers live in an elaborate underwater research and environmental protection facility called ORCA, located near Port Douglas, Queensland. At the beginning of the series, they move to ORCA in order for their mother, Dr. Dianne Bates, to study whale song. A significant portion of the series takes place on ORCA itself, and looks at the activities of its inhabitants, many of whom are school-aged children, just as Jason and Brett.

As the series progresses, it is explained that Neri came to Earth on a spaceship with her father when she was young, though his death soon after leaves Neri to fend for herself. Prior to meeting Jason and Brett, Neri's only friend was a humpback whale (called jali in Neri's native tongue), whom she names "Charley", and with whom she can communicate. Later in the series, Neri's curiosity leads her to explore ORCA, while Dr. Bates' study of Charley's whale song helps her identify Neri as the intended recipient of that song. Eventually, Dr. Bates and her assistant, Dr. Winston Seth, become embroiled in Jason and Brett's effort to keep Neri a secret, while also performing numerous tests on Neri to understand how she's able to communicate with whales.

At the same time that the Bates learn about Neri, a rival research organization, the UBRI Corporation, are introduced. Headed by Dr. Hellegren, UBRI have learned that a spacecraft landed somewhere in the vicinity of ORCA, and begin their own search for any personnel that may have survived. Simultaneously, they work on other projects which threaten the natural ecology of the ocean around ORCA. Eventually, they put in play an effort to build the so-called "ORCA City", an elaborate underwater construction that will likely eradicate much of the natural life on the sea floor. In response, Dr. Bates' mission changes over the course of the series from cetologist to environmental protectionist. This role becomes more prominent beginning with the third season, when UBRI representatives establish themselves onboard ORCA. Accordingly, the series shifts to a more serious tone in its later seasons.

As Neri gradually discovers more of her island and ORCA, she also begins to understand her greater purpose. This self-awakening is particularly enhanced by encounters with others of her kind. In the second season, she discovers her sister, Mera, and the two are given the opportunity to return to their home planet. Mera avails herself of this option, but Neri stays, feeling that she must discover what her father was trying to do on Earth. In the third season, she gains entry into the downed spacecraft that originally brought her to Earth. There, she finds another of her people in suspended animation. The new character, Kal, proves to be the son of the pilot of the vessel, and helps her tap into the ship's memory core. She finds the ship's log, which explains that her father was trying to find a substance that would revitalize Earth's oceans. She then dedicates her life to her father's cause, giving her a genuine sense of purpose that she had perhaps lacked earlier in the series.

While the primary cast gets new motivations by UBRI's move to ORCA and Kal's appearance on the island, the secondary cast radically changes at the outset of the third season. All of the original kids are replaced by a new crew, and more adults are added to the ORCA staff.

As Neri begins her father's mission, she is drawn farther and father away from her island. Beginning in the middle of the third season, some episodes are primarily based on land. By the fourth season, some episodes are set in Egypt, and her father's quest eventually leads her back to the "Ocean World", her home planet. Most of the plots involving the secondary kids on ORCA are reduced in the final season, in order to allow for greater exploration of Neri's homeworld. Several new characters of Neri's species are introduced. Likewise, the threat of UBRI fades, to be replaced by a new organization, PRAXIS (Preventative Response And eXtraterritorial Intelligence Service) and by rebels in the Ocean Planet. This group is dedicated to protecting against any threats posed by extraterrestrial life, and its agents comes to believe Neri and her people are a problem for Earth. They thus chased Neri and the Bates boys around the world. When a mysterious underwater pyramid is discovered in the ocean, Neri and the Bates boys enter it and discover more about the Ocean Planet, and Neri's mission on Earth.

When the rebellion in the Ocean World is growing, Mera escapes to Earth and is reunited with Neri. But PRAXIS sees this pyramid as a danger to the Earth. Much of the final season is thus concerned with PRAXIS' attempt to attack the pyramid, as well as with a "Red Virus" which is spreading in the oceans of Neri's homeworld, the Ocean Plenet. Eventually, in the series finale, Jason, Brett and Neri are able to repulse PRAXIS' efforts and the rebellion, The Earth is saved, and Neri enters into a new life as princess of the Ocean World.

The Bates, Winston, Neri, Charley and the ORCA computer (H.E.L.E.N.) are the only constant characters for the show's entire run — although the actor playing Dr. Bates is recast after the second season and H.E.L.E.N. is "upgraded" in the fourth season. 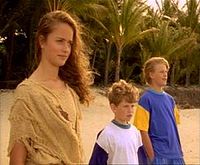 It is important to note that while Ocean Girl featured the ensemble cast listed above, there were several characters who appeared for one season each, with four children appearing in two seasons each (three in seasons 1 and 2, one in seasons 3 and 4), as well as one adult who was not part of the main cast appearing in two seasons, albeit with a changed role. Most of the cast changes were explained by their "friends" transferring back to shore, with the exception of Season 4 where it was not noted at all.

The original Ocean Girl series ran on Australia's Network Ten between 1994 and 1998. Internationally, it was broadcast by the Disney Channel in the United States, Discovery Kids in the United Kingdom, YTV in Canada, TSI in the Italian part of Switzerland, ZDF and KI.KA in Germany, on RTÉ Two in Ireland,on RTL4 in the Netherlands, on (TV2) in Denmark, on NRK in Norway, on Fox Kids in Argentina and Brazil, on TV4 (Sweden) in Sweden and on Canal Panda in Portugal. The Disney Channel only aired the first three seasons, the last was not broadcast. Discovery Kids regularly broadcast all four seasons in continuous loops, up until 2003. The first two series were also broadcast in South Africa by the SABC at the same time as in Australia.

In the UK, the show was broadcast under the title Ocean Odyssey on BBC Two. It was aired in 1996, with a subsequent airing in 2002, though this airing halted before season 4 was complete. In 2004, the entire series was re-aired in full.

The show has recently been repeated on the ABC in Australia, as part of their ABC Kids afternoon block of children's programs. Now it broadcasting in Sri Lanka.

The Complete series is now airing on Perth's West TV - Sundays at 5.30pm and encore screenings the following Saturday at 11.30am

The DVD sets are in the PAL format, and will only play on set-top DVD players that support this playback mode. (This limitation does not apply to DVD players in computers.) The discs from all four seasons were released supporting DVD region code 1, 2, 3, 4, 5, & 6 - which effectively allows the discs to be played in any region.

Dr. Dianne Bates accepts a job on a new underwater science laboratory called ORCA (Oceanic Research Centre of Australia). She is going to study whales as part of her research. Recently divorced, she and her two boys, Jason and Brett, set out to start a new life. What they do not know is that their life is about to change. After boarding ORCA, they soon discover irregular patterns in the whale song. As the story unfolds, it appears that the whale is communicating with another being—a girl in fact! This girl can not only talk to whales, but breathe underwater as well. The story continues as the girl, Neri, discovers a sister and her origins—a far off planet! She is from an advanced civilization "The Planet Of the Oceans" and that she has been sent on a mission to try to save her home as well as earth.