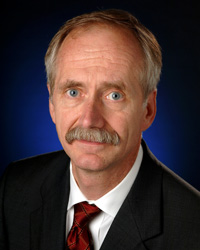 William H. Gerstenmaier has been the Associate Administrator for Space Operations for since 2002.

Gerstenmaier graduated from Akron East High School in 1973, and followed the early space programs of Mercury, Gemini, and Apollo, as a teenager.

Gerstenmaier graduated with a bachelor of science in in 1977, and joined the John H. Glenn Research Center in , beginning his career with NASA. Initially doing research with s, developing air data curve information used during entry on the space shuttle. Gerstenmaier continued his education, obtaining his in at the in 1981.

In 1980, Gerstenmaier moved to , , to work at the Johnson Space Center, researching related to the space shuttle, and was involved in the earliest phases of the International Space Station design. In 1988, he first served as manager of Space Shuttle Program Integration, and then went on to serve as head of the Orbital Maneuvering Vehicle Operations Office. Following that, he became Director of Space Shuttle and Space Station Freedom Assembly Operations, and was named Chief of the Projects and Facilities Branch of the Flight Design and Dynamics Division.

In 1992, Gerstenmaier was given a fellowship from NASA to obtain his degree from Purdue, and in 1992 and 1993, he completed course work for a doctorate in dynamics and control, with emphasis in propulsion at Purdue University. Of the time away from NASA, he said, "It was the most humbling experience of my life."

In 1995, Gerstenmaier returned to NASA as the Shuttle/ Program Operations Manager, and was the liaison to the for operations and protocols. For the first half of 1996, he was stationed in to support , who spent six months aboard Mir.

In December 2000, Gerstenmaier was named Deputy Manager of the International Space Station Program, and in 2005, he became Associate Administrator for Space Operations.

Gerstenmaier has twice been awarded the Aviation Week and Space Technology's "Laureate Award" for "Outstanding Achievement in the Field of Space", as well as three NASA "Certificates of Commendation", two NASA "Exceptional Service Medals", a Senior NASA "Outstanding Leadership Medal", and the "Presidential Rank Award for Meritorious Executives".

In 2004, Gerstenmaier was selected as a finalist for the "Service to America" Medal, for "Leading the efforts to continue the safe operation of the International Space Station in the absence of the Space Shuttle, allowing continued research and preservation of its unique capabilities for the future."

In 2007, The Federation of Galaxy Explorers honored Gerstenmaier with the 2007 "Space Leadership Award", and honored him with the "Distinguished Alumni Award", "For outstanding accomplishments in a career dedicated to the human exploration of space and international cooperation in space."