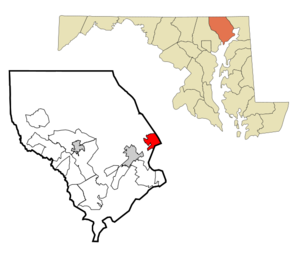 Havre de Grace is a small city but has in recent years expanded through the process of annexing land. Housing development is moderate but steady and includes the complete re-building of blighted areas into middle class homes. Havre de Grace is poised to prosper in the next few years as a result of the BRAC activities of the Department of Defense which will relocate activities from various bases to , a few miles away. This will enhance the population with additional skilled and professional employed residents. Havre de Grace also claims a re-vitalized seaplane port. There are five public schools and the oldest hospital in Harford County, Harford Memorial Hospital.

Havre de Grace's location on the headwaters of the and the outlet of the makes it popular for recreation. There are marinas and service operators dotting the shore line. There is also a city yacht basin and park where various events are held each year; it is a focal point of community life during the summer. A promenade and boardwalk that runs the length of the shore from the Concord Point Lighthouse to the yacht basin was devastated by and was recently rebuilt.

Havre de Grace is an influential town with a long history, having lost the election to be the nation's ultimate capital to , by only one vote.Fact|date=December 2007

There were 4,557 households out of which 31.8% had children under the age of 18 living with them, 46.3% were married couples living together, 12.5% had a female householder with no husband present, and 37.0% were non-families. 31.1% of all households were made up of individuals and 11.0% had someone living alone who was 65 years of age or older. The average household size was 2.44 and the average family size was 3.07. Over half (54%) of the housing units in the city are renter-occupied.

Havre de Grace was once a place with a rather high poverty rate prior to the 1990s (19.6%) with only 9,000 residents, but it is now becoming increasingly upscale every year. Per capita income has doubled over the 1990-2000 era, while the people in poverty grew little compared to the arrival of wealthier residents to the newer suburban projects of the city. The African-American community of Havre De Grace has remained almost constant, while new suburban developments in the 90's and today have brought thousands of middle-to-upper-class residents to the town. Many working-class whites that used to occupy the city have also fled due to dislike towards the suburbs, rising land values, and blighted housing being torn down. One of the most prominent examples of this blighted renewal was the demolition of the in 2005.The amount of drug trafficking in the area led the city to do so, and crime has dropped accordingly.

During the the small hamlet known as Harmer's Town was visited several times by General Lafayette, who commented that the area reminded him of the French seaport of , which had originally been named "Le Havre-de-Grâce". Inspired by Lafayette's comments, the town was incorporated as "Havre de Grace" in 1785.

On May 3, 1813, during the , Havre de Grace was under siege by British Admiral George Cockburn. Lieutenant John O'Neill single-handedly defended the city of Havre de Grace by firing a cannon at the British fleet as they approached on the . He was wounded, captured by the British, and eventually released upon his daughter's petition to Admiral Cockburn. In gratitude Havre de Grace made John O'Neill and his descendants the hereditary keepers of the lighthouse marking the exit of the Susquehanna River into the Chesapeake Bay. The lighthouse keeper's house has been recently restored as a museum. The city of Havre de Grace was sacked and burned, with only two houses and a church spared destruction. Havre de Grace was rebuilt, and in 1878 the town became a city with the establishment of its own government. Around that time, Havre de Grace had a number of citizens who honorably participated in the activities of the in the forwarding of former slaves to safe haven.

The early industry of Havre de Grace included oyster and crab harvesting and fruit orchards. It was also the southern terminus for the Proprietors of the Susquehanna Canal and later the , which carried freight up and down the Susquehanna River between Havre de Grace and , and connected to the . The Lock Keepers house and remnants of the canal exist today as a [http://www.lockhousemuseum.org museum] . There are also a few tenant farm houses left over from the Mitchel farm which overlooked the city. Havre de Grace was also known for duck hunting and its hotels were full of hunters who used local guides to escort them on hunting trips. A strong cottage industry of decoy making soon sprang up.

During the civil war, a large population of free African Americans found a home there by the 1860s, so much so that it became one of the seven sites for the recruiting of “U.S. Colored Troops” during the Civil War. Most of the citizens were Union sympathizers.

Havre de Grace was known as "The Graw" from 1912 through the 1950s, and it prospered as a stop for travelers. These included gangsters and gamblers en route to from the south following the pony routes. The operated from 1912-1950. was reported to have spent some time at the former "Crazy Swede" (now known as "Ken's Steak and Rib House"). However, at the end of the 1950s, the horse track was removed, and its rights were sold to .

An incident in 1949 involving the denial of a license to use a city park and the subsequent arrest of a preacher led to the Supreme Court case of "".

More recently, as of the 1980s, Havre de Grace has been undergoing a complete reconstruction, turning blighted communities into new housing. This includes the addition of Uptown Havre de Grace, but the town has slowly blended back together over the 1990s.

The city has benefited through development of new properties and venues in the last few years. Many blighted areas have been redeveloped into a range of different types of housing.

In September 2003, destroyed the boardwalk and flooded the city about 2 blocks into downtown. In 2004, with very strong efforts from NCCC, [www.americorps.org] the promenade was reconstructed, and now serves as a waterfront board walk and nature walk from Tydings Park to the Maritime Museum, and on to Concord Point Lighthouse.

A new hospital and school is already proposed for the area with the addition of Bulle Rock, and a new medical center has recently been built on Route 40.

In keeping with the history of having had a race track in town a local developer has proposed a development to be called "The Graw" to include a working equestrian park. This is one of many plans proposed for tracts of re-developable land recently cleared of blighted housing. Industrial chemical ground contamination in the area limits the type of construction that can be done in this particular section of the city. Havre de Grace's version of Main Street, Washington Street, is thriving due to its historic bars and antique shops. New condominiums are being built on the water; these serve as both full-time and summer homes and swell the city population every summer.

Politics in Havre de Grace can sometimes become heated, especially during City Council meetings, even more so when certain topics are approached. Many locals use the term "Have a Disgrace" when not in agreement with the City over issues. The terms "Pennsylvania navy" or "Lancaster navy" (or more commonly "Dutch Navy") are used in reference to the boaters from who weekend here.

(Because the primary hospital in eastern Harford County is Harford Memorial in Havre de Grace, the town is the birthplace of many people who never actually lived there. For example, the Ripken family lived in nearby , but because Cal and Billy were born in the hospital Havre de Grace is listed as their town of birth.)