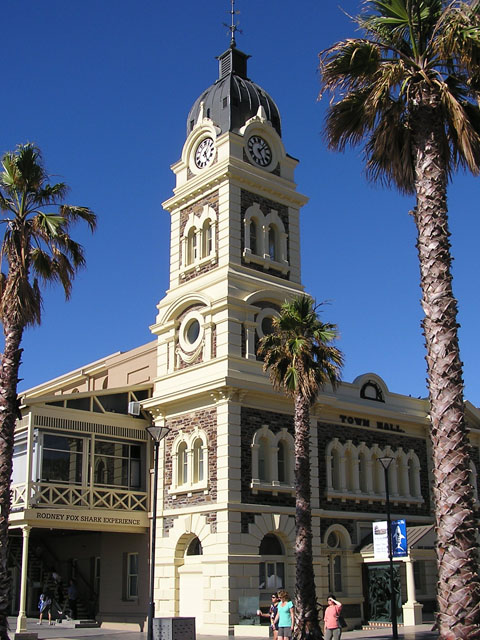 (For other meanings of Glenelg, see )

Glenelg is a popular beach-side suburb of the n capital of . Located on the shore of in , it has become a popular tourist destination due to its beach and many attractions, home to several hotels and dozens of restaurants.

Established in 1836, it is the oldest European settlement on mainland South Australia (the oldest being Kingscote on ), with the proclamation of the colony of . It was named after Lord Glenelg, a member of British Cabinet and .

Through Lord Glenelg the name derives from (but previously ), which in the Gaelic is "Gleann Eilg". The name "Glenelg" is noteworthy for being a .

:"See Also: ":"See Also: "Prior to the 1836 , Glenelg and the rest of the was home to the group of . They knew the area as "Pattawilya" and the local river as "Pattawilyangga", now named the . Evidence has shown that at least two epidemics had killed the majority of the Kaurna population prior to 1836. The disease appeared to have come down the from . [cite book | title="Footprints in the sand. Kaurna life in the Holdfast Bay Area" | publisher = Aboriginal Research Unit, University of South Australia | location = Underdale, South Australia | year = 2001 | edition = 2nd edition | isbn = 0-868-039-187 | last=Allen | first = Yvonne | coauthors = Williams G.Y., Ambjerg-Pedersen B., Parnis A., Lee J. | pages=pp. 5-6]

:"See also: "The first British settlers set sail for South Australia in 1836. Several locations for the settlement were considered, such as , and . The Adelaide plains were chosen by Colonel , and Governor proclaimed the province of South Australia at the site of in Glenelg North on , . [Cite web| url=http://www.holdfast.sa.gov.au/heritage_history/local_info.htm |author=City of Holdfast Bay|title=Heritage and History|accessdate=2006-12-01]

The first in Glenelg opened on 5 December 1849; the first postmaster was John McDonald of the St Leonard's Inn. A telegraph office was opened in September 1859 and the two offices amalgamated in 1868. [Walker, Martin (2004) "The Post, Telegraph and Telephone Offices of South Australia and the Northern Territory", Torrensville, South Australia: published by the author, p. 127 ISBN 0 9757019 0 8] The present post office building on Moseley Square was built in 1912. [Cite web| url=http://www.adelaideeguide.com/glenelg.php| title=Glenelg| work=Adelaide eguide| author=eguide Pty Ltd| accessdate=2006-12-15]

Construction of the Glenelg Institute, which is now the Glenelg Town Hall (pictured top right), started in 1875. The institute opened in 1877,

In August 1857, construction of Glenelg's first jetty commenced; it was opened on 1859. Costing over £31,000 (pounds sterling) to build, the structure was 381 metres (1,250 ft) long. The jetty was used not only by fishermen but also to accept cargo from ships, including a mail service operated by P&O, until replaced it as Adelaide's main port.

There were several additions to the jetty. A was built in 1872 at the jetty's end, but a year later it caught fire and was cast into the sea to save the rest of the structure. A replacement lighthouse was built in 1874, and was 12.1 metres (40 ft) tall. Other additions include public baths, an , a police shed and a three-story with s. The kiosk structure also housed a family.

The kiosk was wrecked in a storm in 1943, and the entire jetty was destroyed by a freak in 1948, most of the structure washed away and the rest unsafe. Just two weeks later, local council began drafting plans for a new jetty and construction was completed in 1969.

Glenelg has been a popular spot for recreation and leisure for much of its history. Following the success of , a similar amusement park was constructed on Glenelg's foreshore in 1930.

Built near the former Luna Park site was Magic Mountain, which first opened in 1982. It featured water slides, mini-golf, bumper boats, dodgem cars and many other amusements and was popular with many Adelaide residents. It was also extensively criticised, called an eyesore and likened to a "giant dog turd" in the media; despite this it was heavily popular with young children and teenagers. [Cite web| url=http://www.abc.net.au/adelaide/stories/s1156154.htm |author=Ashley Walsh, ABC Adelaide|title=Farewell Magic Mountain|accessdate=2006-12-01|year=2004]

As part of the Holdfast Shores development, Magic Mountain was finally demolished in 2004 and replaced with , a modern centre with a more conservative design which still incorporates the historic carousel; it opened in mid 2006. A 25-metre single-arm is a popular amusement during school holidays and is a prominent feature of the area. [cite news|title=Ferris wheel for Bay |work=The Advertiser, Adelaide| date=2007-06-10 |publisher=News Limited |url=http://www.news.com.au/adelaidenow/story/0,22606,21879619-2682,00.html]

Atlantic Tower was built in Glenelg in the late 1970s and was Adelaide's tallest residential building at the time. The fourteen-story tower featured a revolving restaurant on its top floor, and was part of a larger development plan that never eventuated. [Cite web| url=http://www.emporis.com/en/wm/bu/?id=atlantictower-adelaide-australia |author=Emporis Buildings|title=Atlantic Tower|accessdate=2006-12-01|year=2006] Many other high-rise buildings exist in Glenelg, including the fifteen-story Stamford Grand hotel on Moseley Square, built in 1990, [Cite web| url=http://www.emporis.com/en/wm/bu/?id=stamfordgrand-adelaide-australia |author=Emporis Buildings|title=Stamford Grand|accessdate=2006-12-01|year=2006] and the twelve-story Liberty Towers, built in 2004. [Cite web| url=http://www.skyscrapercity.com/showthread.php?t=6028 |author=SkyscraperCity |title=Adelaide: Liberty Towers|accessdate=2006-12-01|year=2004]

The recent Holdfast Shores development, starting in the late 1990s, included the construction of the Marina Pier apartment building with its own private marina in Glenelg North and the Pier Hotel. The development was met with strong opposition, from both local residents and the City of Holdfast Bay, fearing over-development would ruin the area. [Cite web| url=http://www.holdfast.sa.gov.au/pdf/Hfast_Shores_Media_Release_160604.pdf |author=City of Holdfast Bay|title=Profound Regret and Disappointment, Apartments to go ahead on Glenelg foreshore| accessdate=2006-12-01| year=2004] Parts of the plan were scaled back, with the Platinum Apartment building scaled down from fifteen stories to nine, and the cinema complex cancelled.

The suburb is bordered by , the road link to the Adelaide CBD, to the north, Brighton Road to the west and Pier Street to the south. Jetty Road is the main shopping strip in the suburb, and runs down the middle. The operates several bus services from Glenelg to various destinations including the City of Adelaide and Adelaide Airport. The local council operates a free loop bus service in the area.

The only line still operating in Adelaide is the , which runs from Moseley Square, along Jetty Road though Glenelg, to the Adelaide CBD. The route dates back to 1873 and is still operated on weekends and holidays by the historic H-Class trams, circa 1929. [Cite web| url=http://www.adelaidemetro.com.au/guides/pdfs/glenelg_obahn.pdf |author=Adelaide Metro|title=Adelaide O-Bahn and Glenelg Tram| accessdate=2006-12-03| year=2006] Weekday service was taken over by modern trams in 2006.

Recreational boating is popular in Glenelg. To the north is the mouth of the , which has been dammed to create an artificial boat harbour with a lock down to the sea.

*Jetty Road is a long ribbon of shops, entertainment facilities and other commercial activities - it is the main shopping precinct in Glenelg.
* A shark museum owned and operated by conservationist and shark attack survivor "Italic textCEASED OPERATION IN 2008".
* Glenelg is the finishing point of the annual City-Bay fun run held in September. The run is 12 km long.
* Glenelg is home to a team in the (SANFL), the Glenelg Tigers.
* Glenelg is the home of the Bay Discovery Centre, a free museum about Glenelg's history.
* The annual race is held at Glenelg in December.
* The annual celebration of the Epiphany for the Orthodox faithful of , accompanied by the Greek festival of the Theophany.

Since 1985 Glenelg is located in the for the , but was previously in a seat also named Glenelg.